After dropping the first two sets the No. 1 Trinity Western Spartans (18-1) pulled off a dramatic comeback to defeat the No. 10 Brandon Bobcats (11-10) 3-2 in Canada West playoff action Saturday night at the Langley Events Centre in Langley, B.C. The victory gave the Spartans a 3-0 record in pool play, while dropping the Bobcats to 2-1.

Outside hitter Brodie Hofer led the way for the Spartans with 19 kills, five aces, three digs, and two blocks for 25 points. 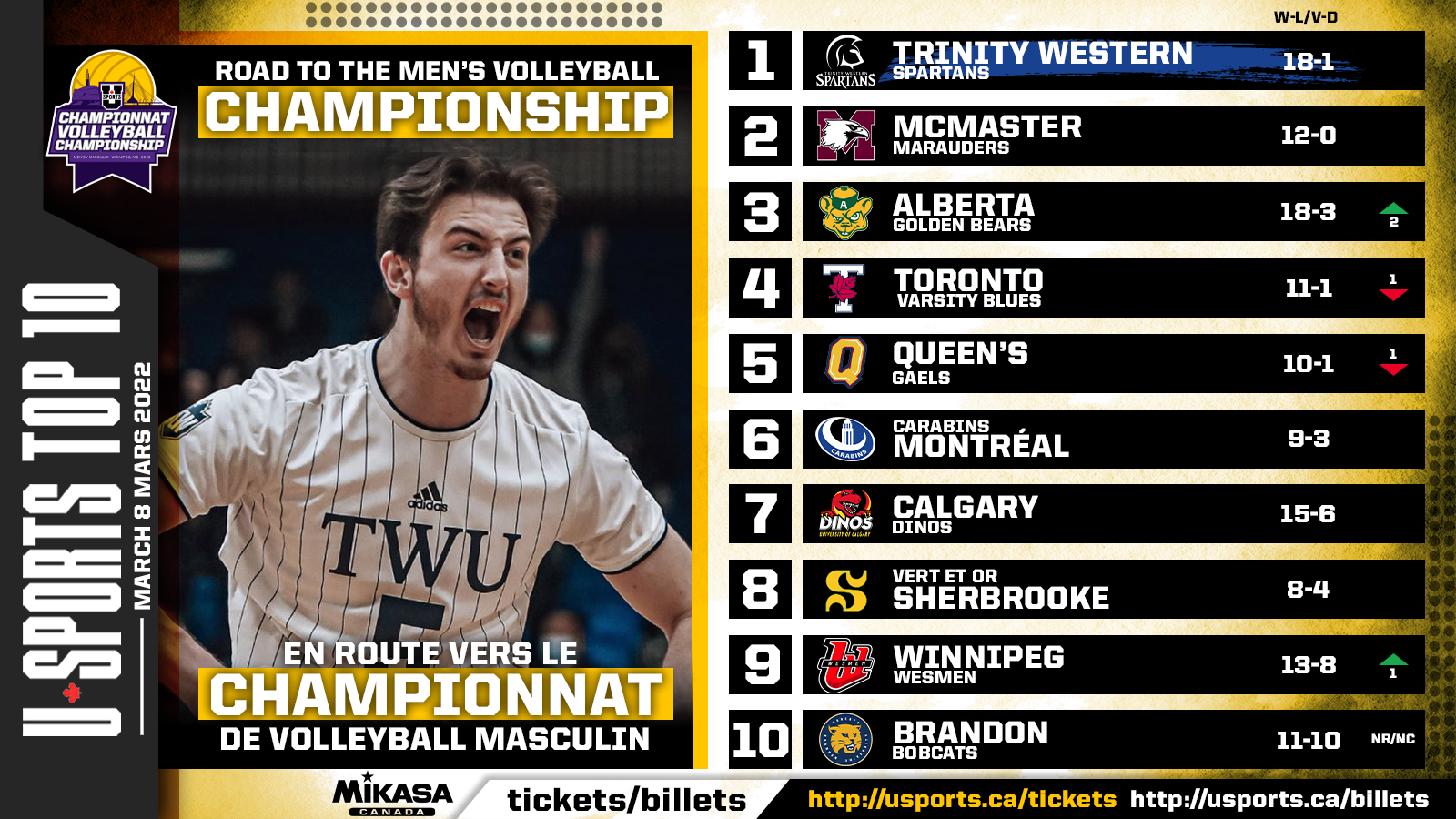 In women’s volleyball, the No. 1 Trinity Western Spartans (18-1) remain the top seed after finishing the opening round of the Canada West Playoffs with a perfect 3-0 record.

Trinity Western swept the Brandon Bobcats (10-9) 3-0 Saturday night at the Langley Events Centre in Langley, B.C. The Spartans have yet drop a set in the postseason.

Meaghan Mealey led the charge for the Spartans with 11 kills, three digs and a block in their Saturday night sweep of the Bobcats.

In OUA action, the Toronto Varsity Blues (12-0) moved up to the No.2 spot after completing a perfect regular season with a sweep of the Nipissing Lakers (6-5) on Saturday. 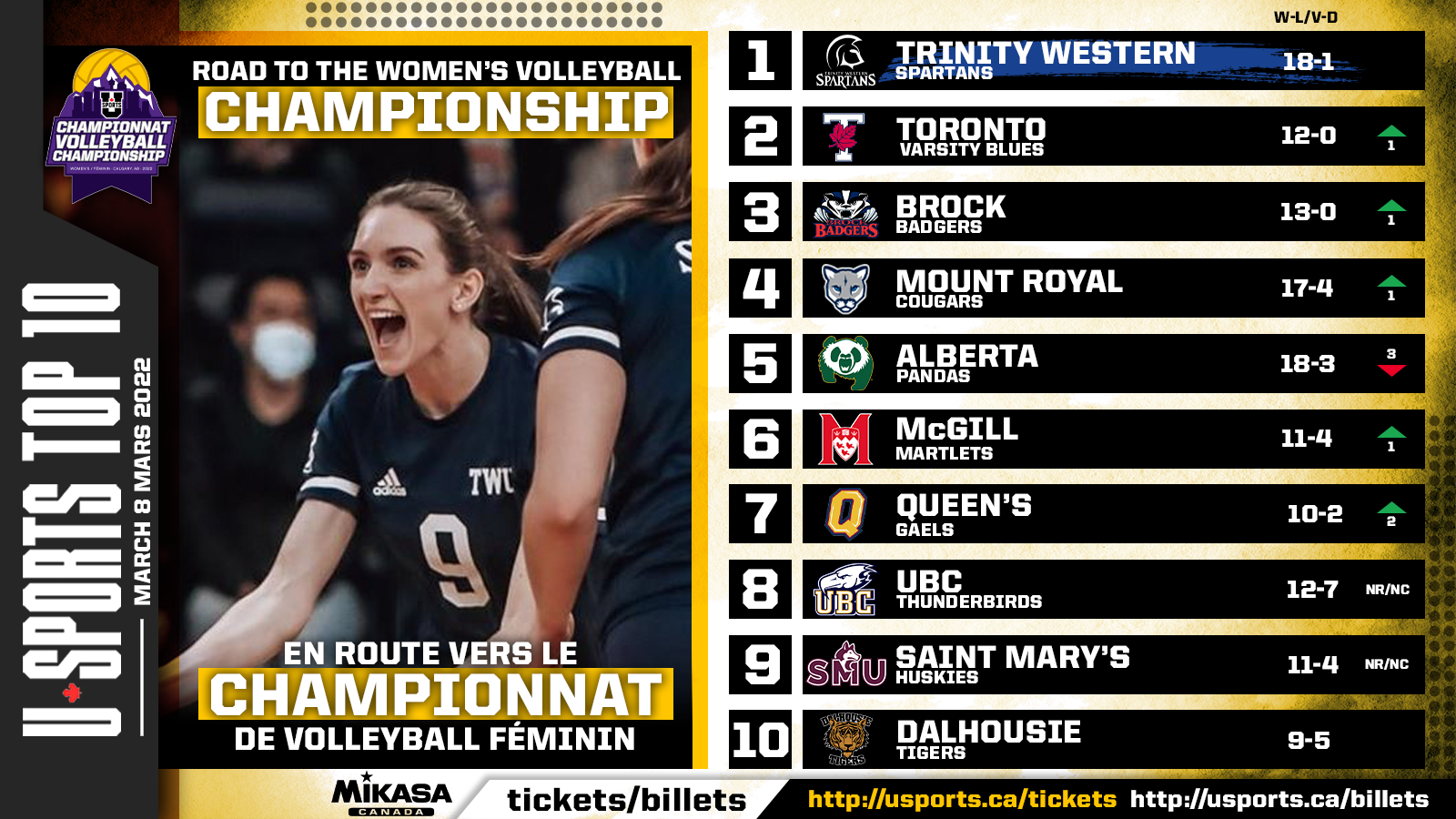 In men’s basketball, the No.1 Carleton Ravens (12-0) extended their perfect season with a win over the No.3 Ottawa Gee-Gees (12-2). The Bytown Battle proved to be a nail-biter as the Ravens were able to hold off the Gee-Gees down the stretch to win 64-59.

Cordell Veira played a pivotal role for the Ravens scoring 16 points while cleaning the glass for five offensive rebounds. 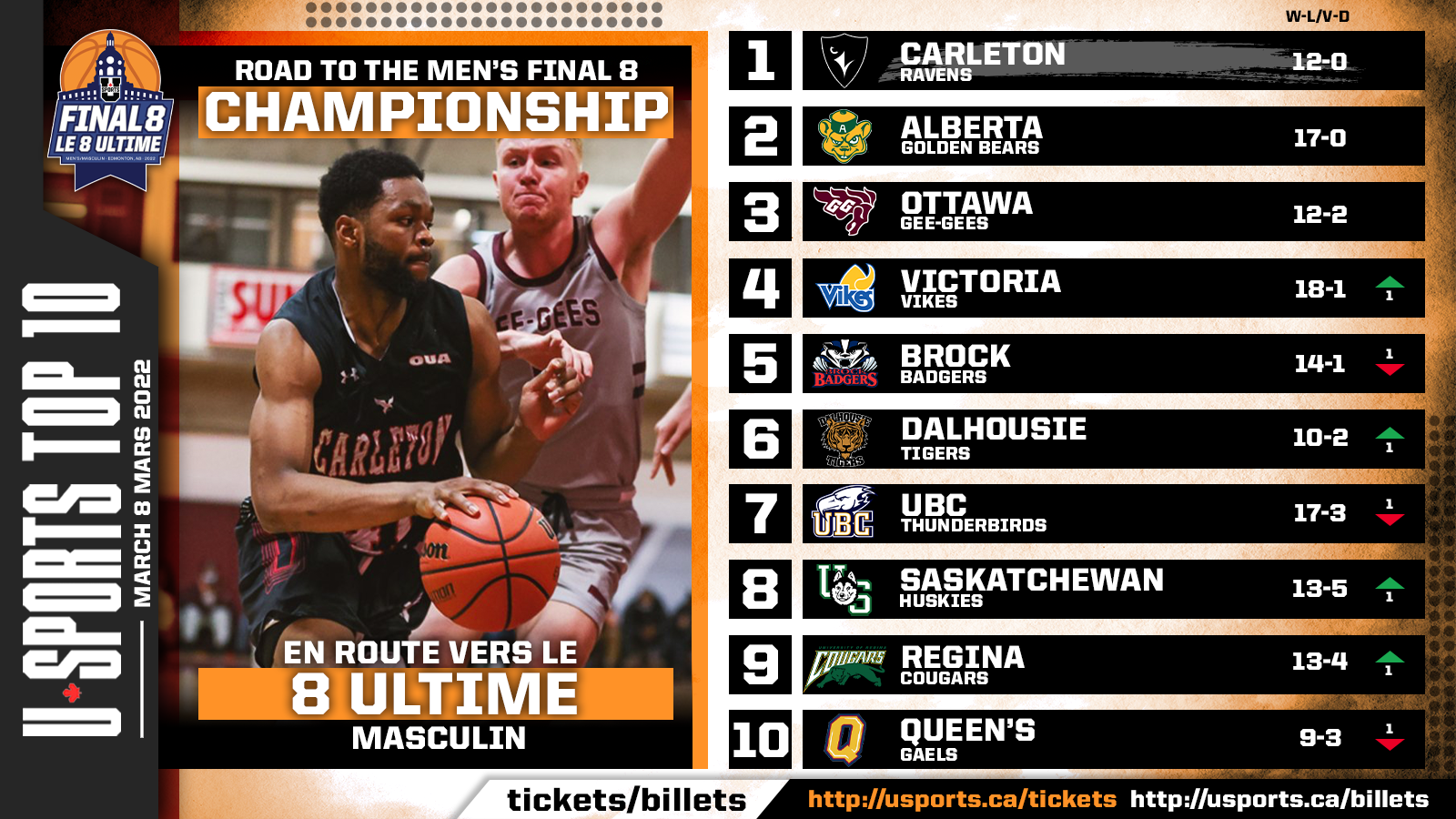 In women’s basketball, the No. 1 Brock Badgers remain atop the rankings heading into the postseason with a perfect 12-0 record.

In Canada West action, the No. 2 Saskatchewan Huskies (15-2) defeated the Calgary Dinos (8-10) 72-62, punching their ticket to the Canada West Final Four. Carly Ahlstrom’s offensive outpouring of 24 points hoisted the Huskies to another semi-final berth. 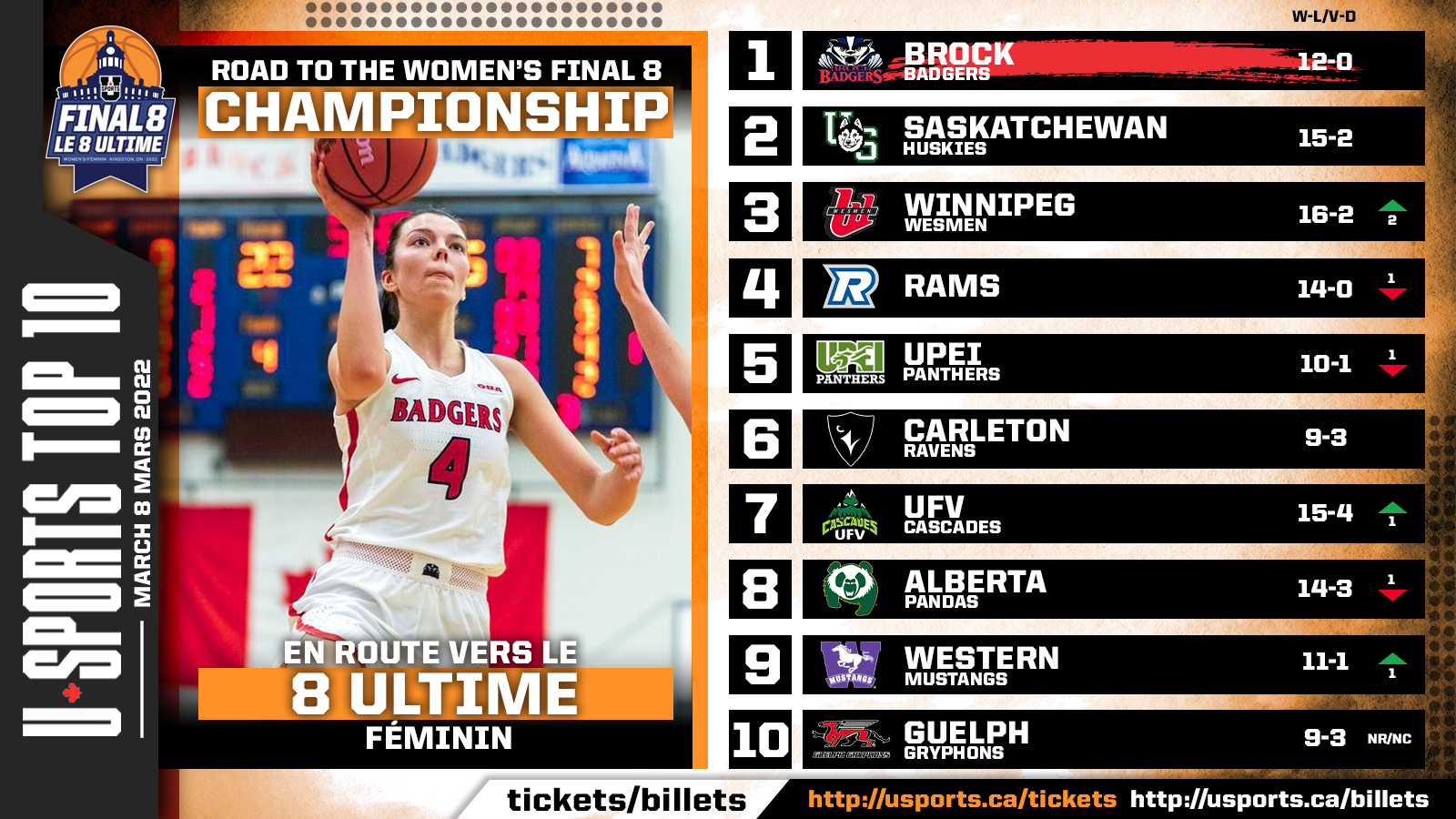 In men’s hockey, the perennial powerhouse UNB Reds (21-3-0) are once again the top team in the nation. The Reds beat the No.3 StFX X-Men (17-7) in a 3-2 shootout victory on Friday before blanking the Dalhousie Tigers (11-12) 4-0 on Saturday. The Reds have clinched a first-round bye in the AUS hockey championship. 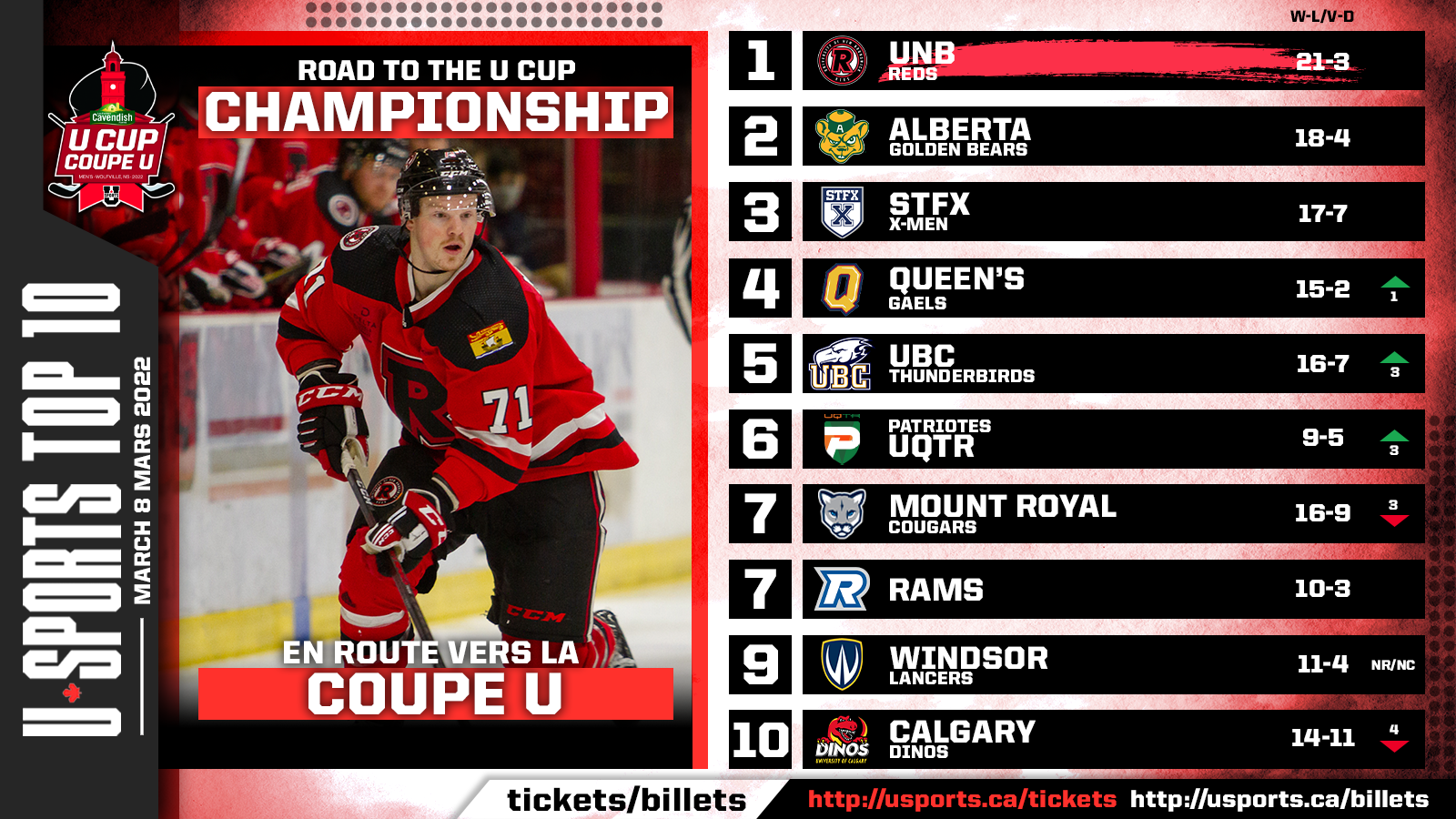 On the women’s side, the No. 1 Toronto Varsity Blues (14-2) are the top squad after being upset by the No. 9 Nipissing Lakers (10-4) in their final game of the regular season.

The Lakers defeated the Blues in thrilling fashion—clinching a 3-2 victory in overtime. Nipissing’s Madison Laberge completed a natural hat-trick, scoring the final three goals in the contest.

The biggest movers in the rankings are the No. 4 Saskatchewan Huskies (15-9) up from the tenth spot after sweeping the No. 7 Mount Royal Cougars (16-6) to advance to the Canada West Final. The Huskies will take on the UBC Thunderbirds (16-6) for a Canada West banner. 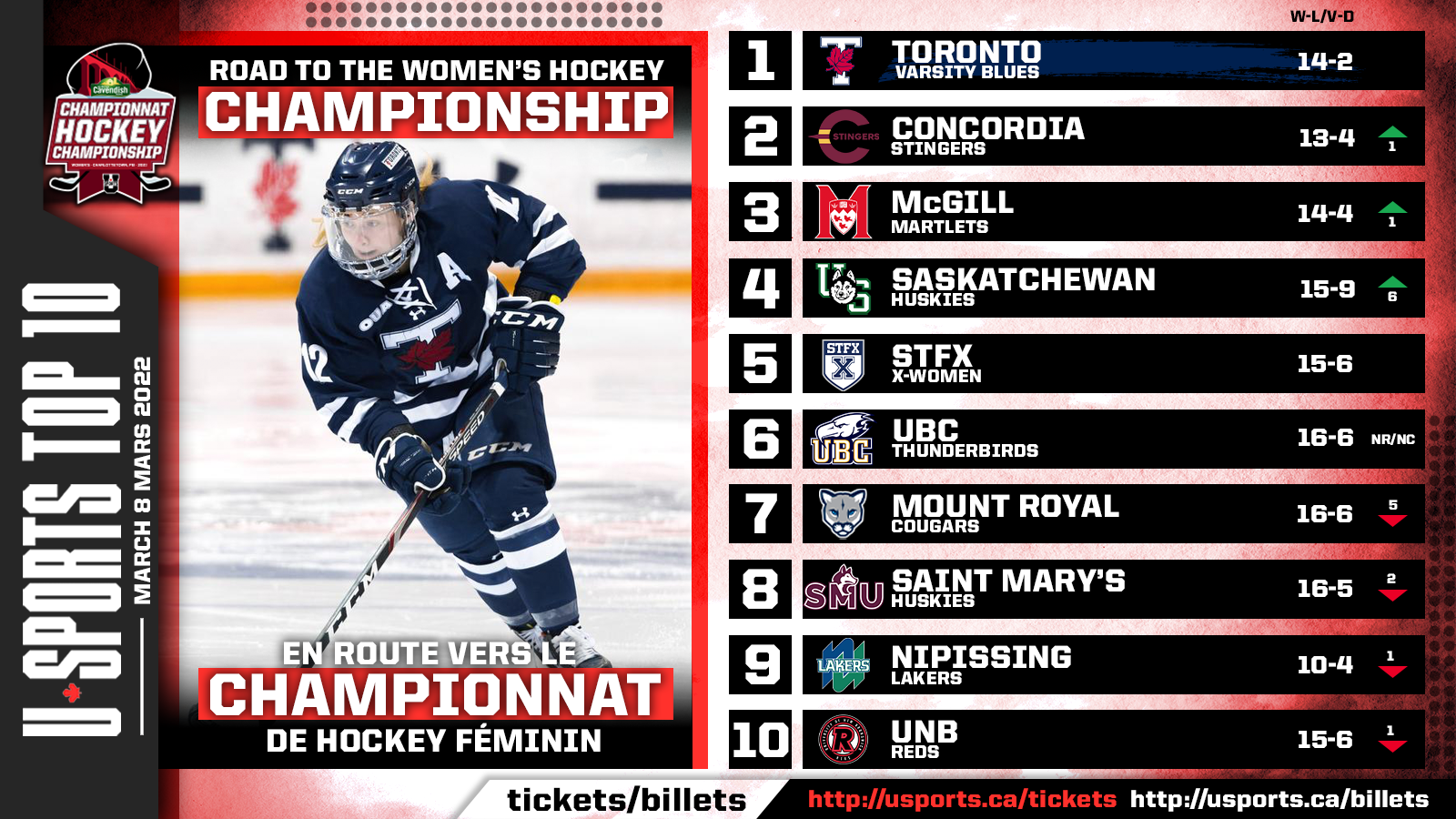 In men’s track and field, the No. Guelph Gryphons remain the top seed after a strong showing at the 31st Annual Windsor Team Challenge held last weekend.

Matthew MacNeill shone for the Gryphons taking the gold in long jump with a 7.08m jump, while the 4x200m relay team took gold for Guelph with a blistering time of 1:29.65. 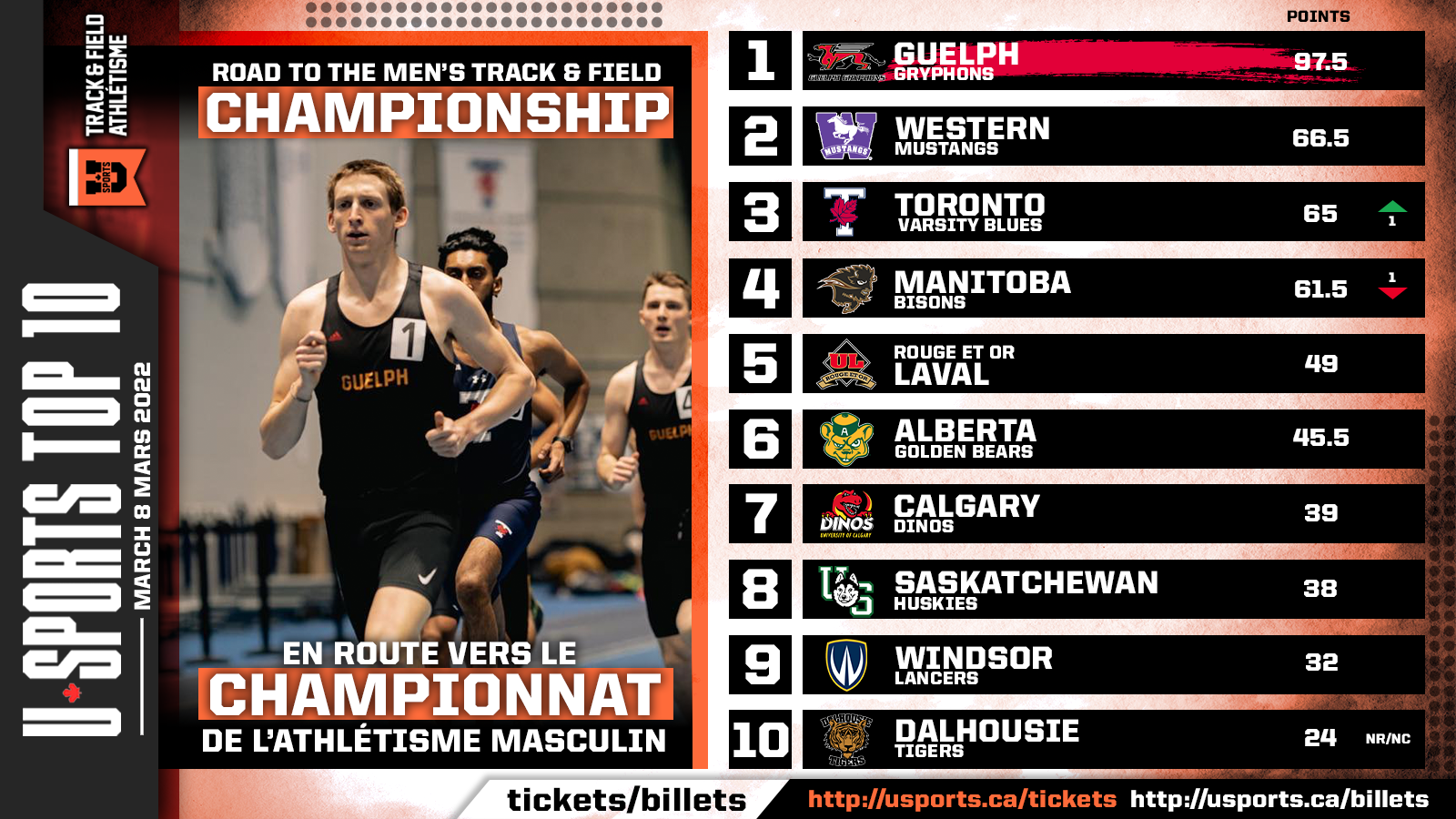 On the women’s side, the No. 1 Guelph Gryphons also showed their dominance at the Windsor Team Challenge.

Jacqueline Madogo took gold and Zoe Sherar took silver in the 60m dash, while Sherar also blew away the competition in the 300m race, taking gold with 2.7 seconds to spare. 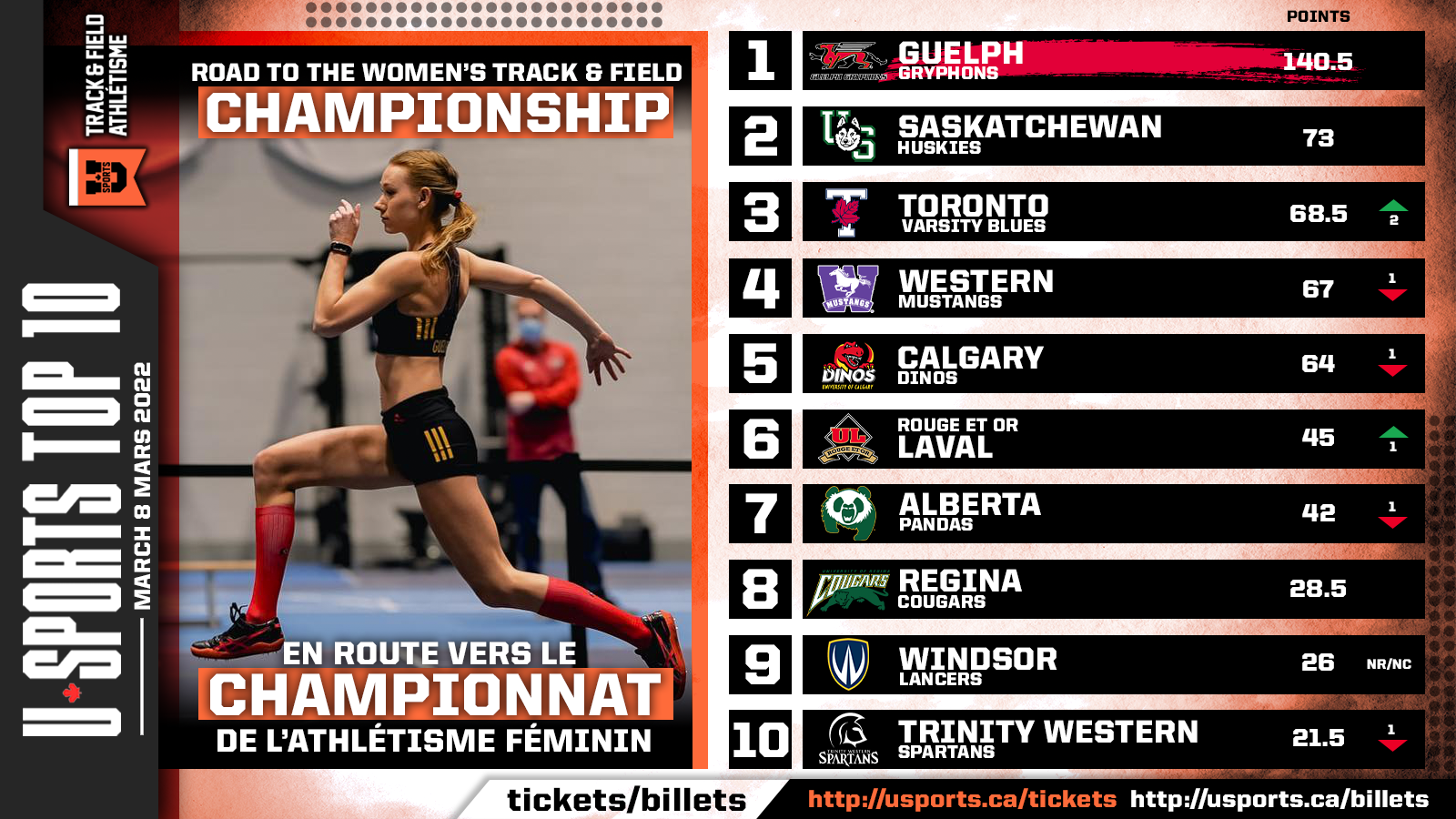 In men’s and women’s swimming, the No.1 UBC Thunderbirds remain the top seed heading into the U SPORTS Swimming Championships.

In the RSEQ conference championships, the McGill Redbirds and Martlets dominated on both the men’s (No.2) and women’s (No.4) side, sweeping the championship for a rare Triple Crown of conference banners. 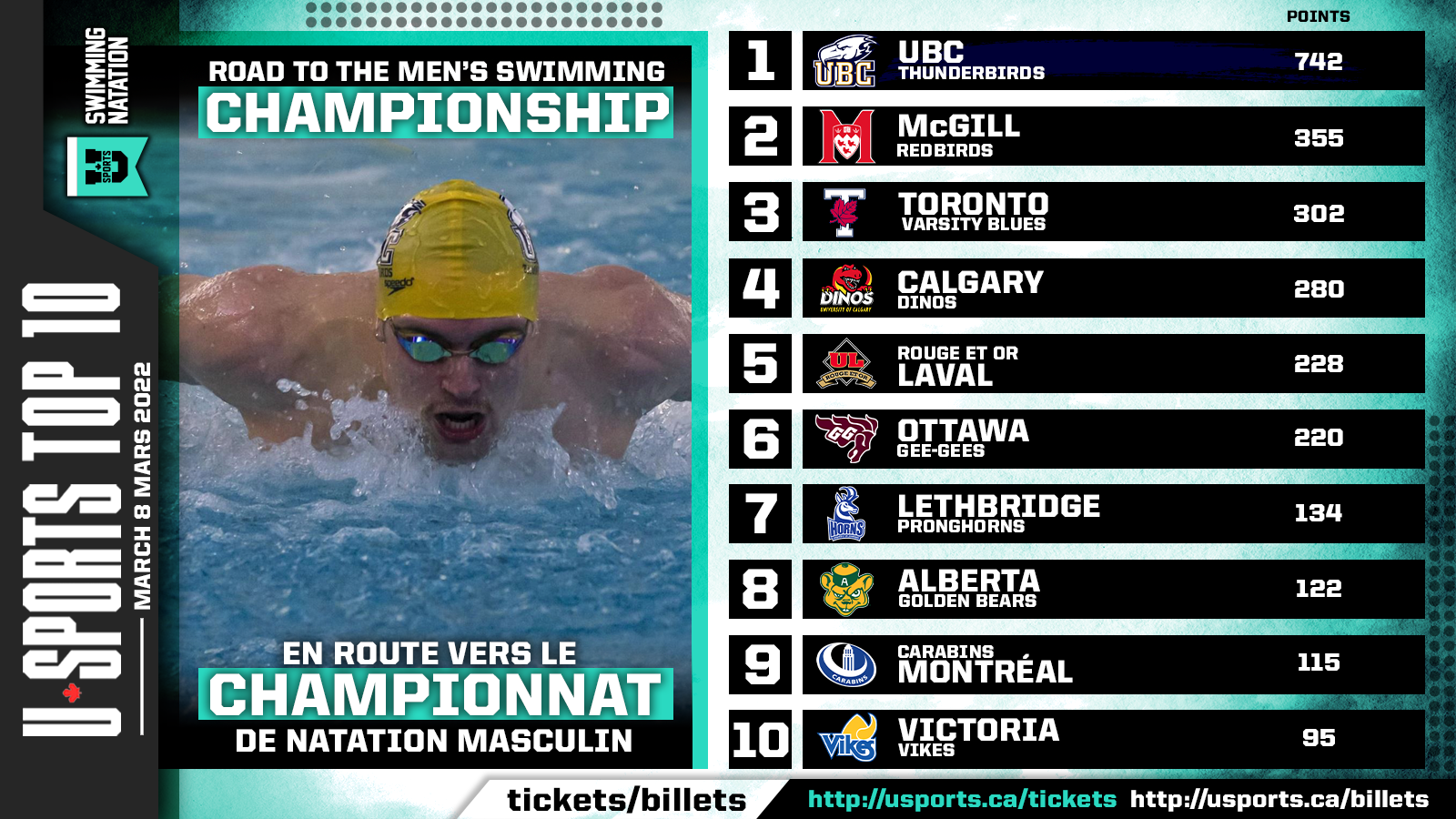 The Redbirds and Martlets each finished atop their respective men's and women's divisions, in addition to capturing the combined banner. 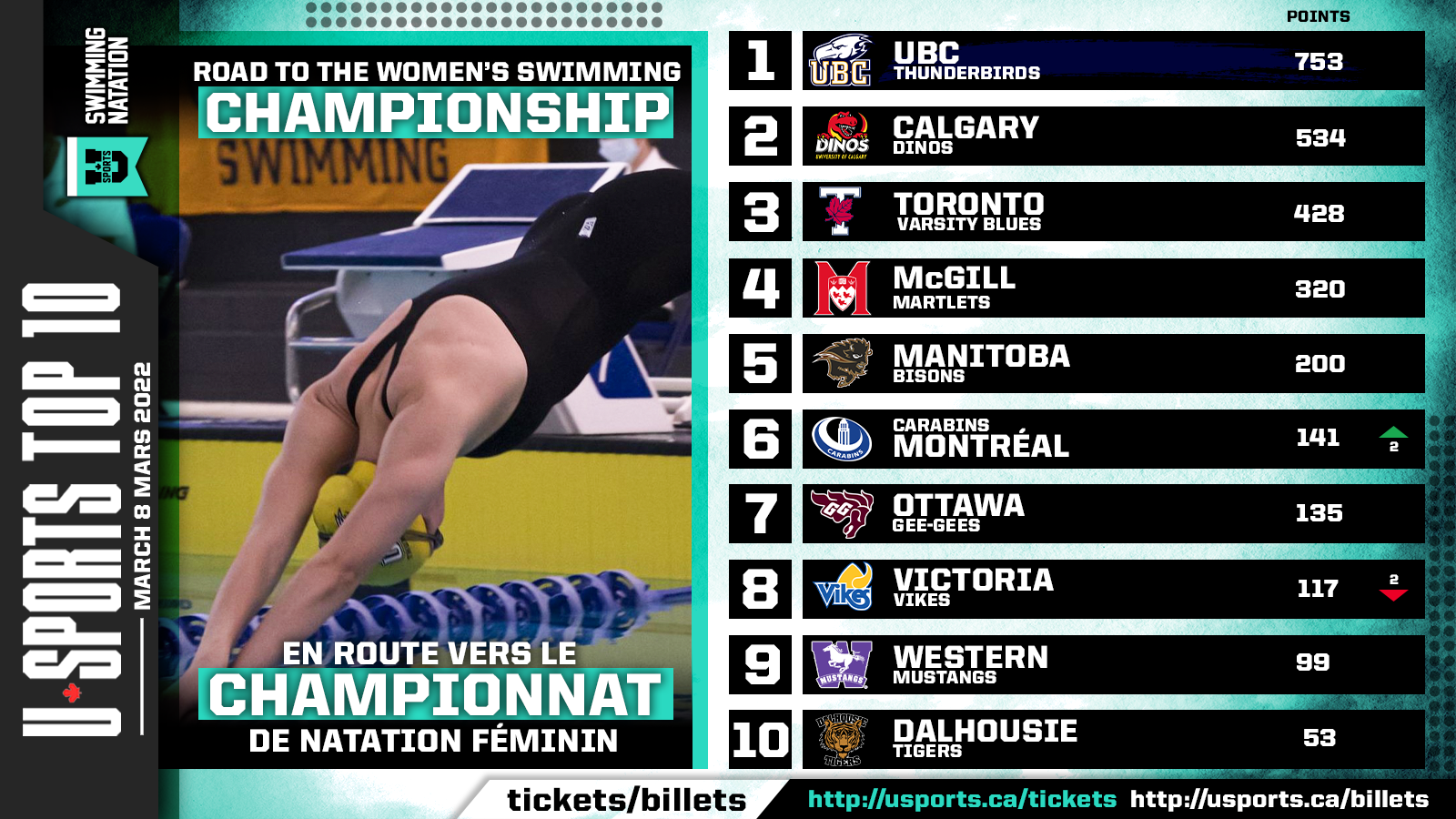