It was the early 1990s, and the University of Toronto was seriously considering pulling the plug on their football program. But then, Adam Zimmerman stepped in. As one of the founding members of the Friends of Football group, now known as the Blues Football Alumni Network (BFAN), Zimmerman used his business expertise and advocacy skills to keep U of T football alive.

The Varsity Blues, riding on the high of being able to continue on with the Friends of Football’s financial and moral support, proceeded to win the 1993 Vanier Cup – the same year the school scrapped the program’s closure plans. It’s for this reason, and for the plethora of his other accomplishments, that Zimmerman was posthumously awarded the L.B. “Mike” Pearson Award at the U SPORTS Awards Gala on June 7.

“I really appreciate that he was a recipient of this award. I think he’s very deserving of it,” says Greg Gary, the head coach and manager of football operations for the Varsity Blues football team. “I mean, I’m not sitting here, in this chair right now, (if it weren’t for him).” 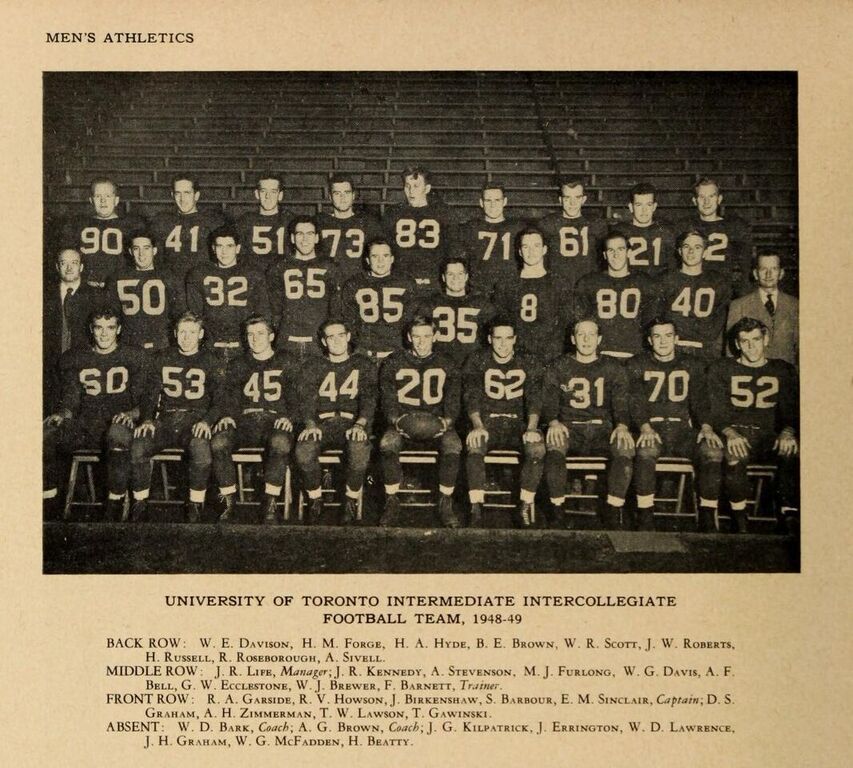 Prior to his work to save and help fund U of T football, Zimmerman was a player himself. He began his love for the game playing in high school and then for the Varsity Blues in the late 1940s. Off the field, Zimmerman earned a philosophy degree in 1949. He later became a chartered accountant before joining the team at Noranda Mines, a Canadian mining and forestry company. During his years with the organization, Zimmerman worked his way up the executive ladder, eventually becoming president and vice chairman.

While at Noranda, Zimmerman helped the company implement the takeover of MacMillan Bloedel, an ordeal dubbed the largest corporate acquisition in Canadian history at the time. Aside from his career leading Noranda where retired from in 1994, Zimmerman managed to create a diverse and impressive resume. He held 41 directorships throughout North America and Europe including the Hospital for Sick Children, was the founder of the University of Northern British Columbia (UNBC), and an Officer of the Order of Canada—to name a few of his great accomplishments.

Zimmerman was able to achieve so much in his 89 years because he “identified problems and set out to fix them,” according to his obituary. He was also described as a “courtly” yet “straight talker” with a “wonderful laugh.”

Regardless of the problems he was fixing or the work he was doing in the business world, one thing always remained: Zimmerman’s love for U of T football. He continuously supported the school and its athletics both financially and vocally, so much in fact, that he was honoured with the U of T Arbor Award for volunteerism and generosity as well as the school’s Loudon Award for the Advancement of Athletics. To top it off, the main alumni gathering space in the Varsity Centre pavilion, which overlooks the football field, was even officially named after him in 2013.

“We are reminded of him every time we walk into the Zimmerman Room and see his picture on the wall,” said Beth Ali, U of T executive director of athletics and physical activity, during the presentation of the L.B. “Mike” Pearson Award. “His spirit lives on in our hearts and minds.” Coach Gary adds that he hopes Zimmerman’s legacy will go even beyond memories and beyond the Adam Zimmerman Room. He hopes that Zimmerman’s reputation of serving the community that built him is something that his players will emulate.

“He’s been an incredible ambassador for the University of Toronto football program,” says Gary, emphasizing Zimmerman’s generosity, community involvement, and leadership. “I hope that (his work) will be paid forward by our players, that they will do the same and make sure that they give back to the program.

“The university has produced a lot of leaders,” Gary says reflecting on Zimmerman’s life. “But I’d say he is at the top of that list.”

Olga Hrycak, a leader among men