LONDON, Ont. (U SPORTS) – Laval Rouge et Or receiver Kevin Mital was named the winner of the Hec Crighton Trophy as the most outstanding player in U SPORTS football at the annual Vanier Cup All-Canadian awards banquet, held Thursday night in London. 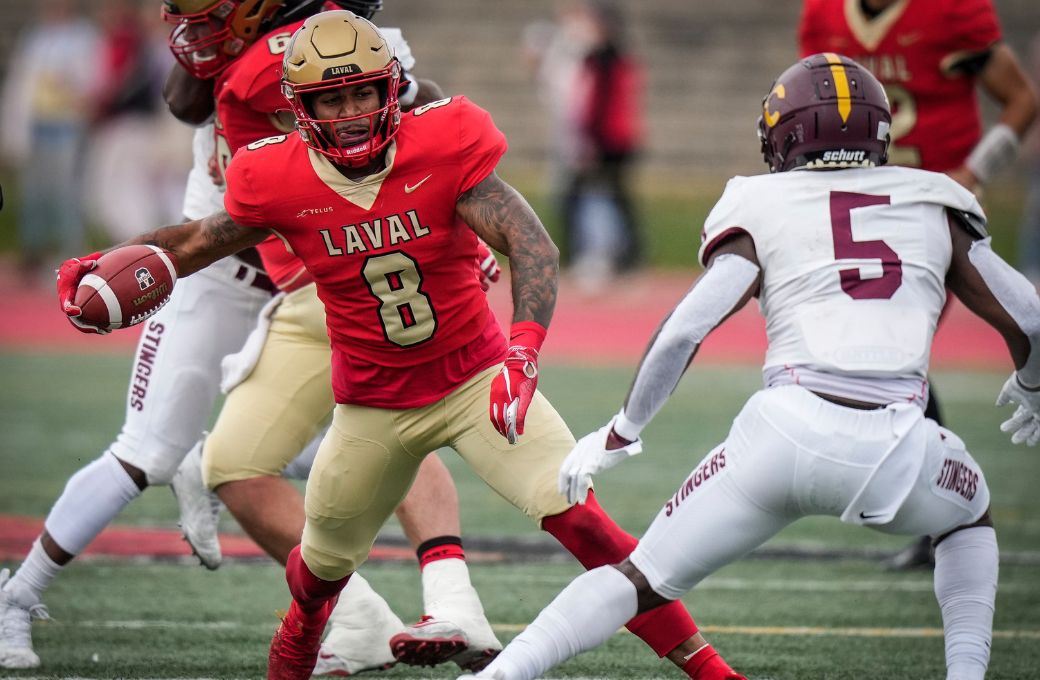 Kevin Mital led the country in both receptions and yards, with 58 catches for 751 yards in eight games for the Laval Rouge et Or. The 23-year-old from St-Hubert, Que., made 12 touchdown catches this year, which set a new program record, tied the OQIFC/RSEQ mark held by Rob Harrod of Ottawa (1998) and Alexander Fox of Bishop’s (2013), and tied for the sixth-highest single-season total in U SPORTS history.

His performance in 2022 played a huge role in Laval regaining the Dunsmore Cup and returning to the Vanier Cup stage. He started his spectacular season with a four-touchdown performance on Sept. 3 at McGill, which set a program record for touchdowns in a game. He also scored three majors on two other occasions year. Altogether, he scored 72 of Laval’s 274 this season.

“He is a generational player. I hope the fans will enjoy seeing him play because I don't think he's going to play at this level for long. He dominated everywhere he went,” said Rouge et Or head coach Glen Constantin. “I knew he was going to dominate with us, but it's the ease with which he does it. Sometimes it’s almost disconcerting how easy it looks for him!

Mital is the first receiver to win the award since Western’s Andy Fantuz in 2005 and the first winner from the Laval Rouge et Or since Benoît Groulx in 2008. 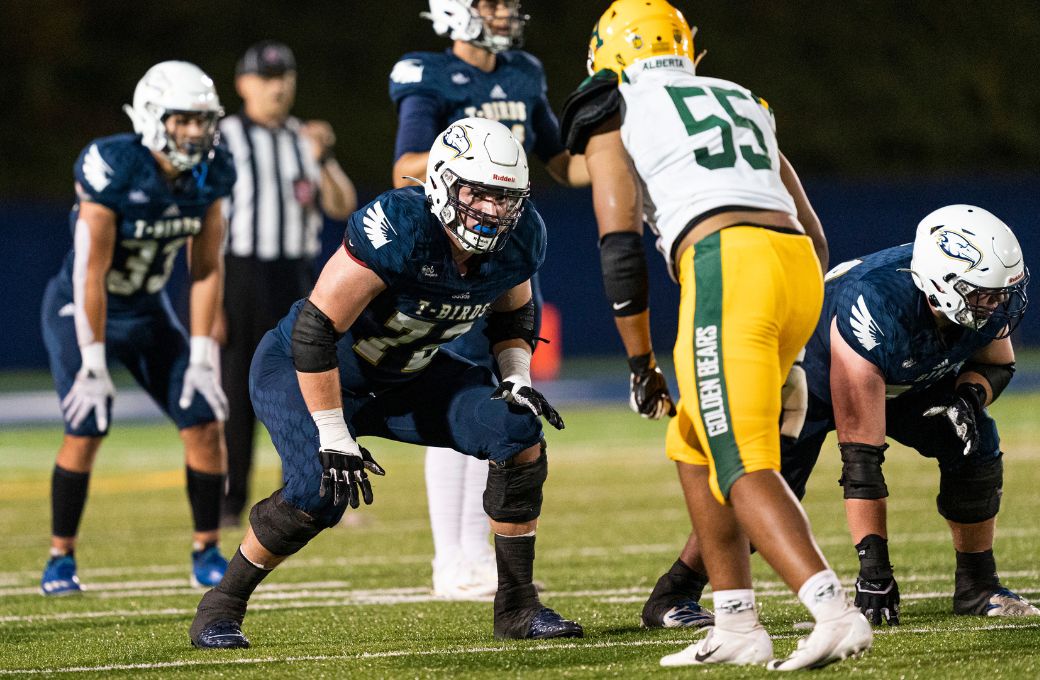 One of just two unanimous Canada West offensive All-Stars, Theo Benedet entered the 2022 season as the eighth-ranked CFL Draft prospect, tops among any U SPORTS athlete, and his performance on and off the field has proven him worthy of such high expectations. The 6-foot-7, 305-pound tackle has grown from a skilled athlete with loads of potential into a bona fide leader for a young T-Birds team that returned to the Hardy Cup final for the first time since 2017. A huge part of UBC’s conference-leading ground game, Benedet routinely provides lead blocks for his receivers and running backs. His intelligence on and off the field is equal, as the North Vancouver, B.C., product is a multiple-time Academic All-Canadian.

“Theo has had a tremendous year for us, he’s really starting to come into his own as a football player. There’s never been a question about his athleticism and his physical skillset, where it’s starting to become real exciting is he’s understanding the game better, and that means his ceiling is going to become substantially higher in the next year or two,” said T-Birds head coach Blake Nill. “Theo has become one of the leaders on the O-line and the offence in general. Again, this is something I think he still has room to be even better at. We’ve only just begun to scratch the surface of his potential.”

He is the first offensive lineman to take the Metras trophy since Laurent Duvernay-Tardif of McGill in 2013 and only the second Thunderbird, following Tyson St. James in 1999. 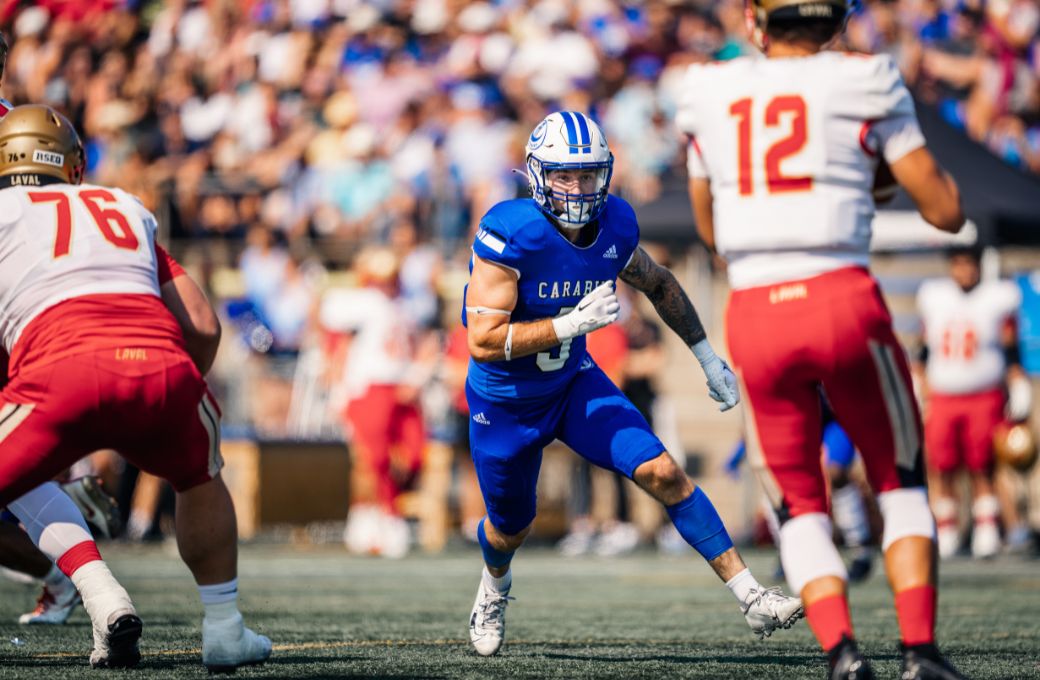 Nicky Farinaccio of the Montréal Carabins tormented quarterbacks over the RSEQ this season, as he made 10.5 sacks, the most in the country this season, and only 2.5 shy of the national record held by his coach, former Carabin Jean-Samuel Blanc. The second-year linebacker finished the season with 33.5 tackles – 12 of which were for losses - highlighted by an eight-tackle, two-sack performance in a win over Laval on Sept. 10. The former André-Grasset Phénix and St-Léonard Cougar and forced three fumbles this season as the Carabins led the RSEQ in pass defence.

“Nicky really has a contagious energy,” said Carabins’ head coach Marco Iadeluca. “He constantly has a smile on his face, and it shows! He has a very positive energy, and it’s contagious. Everybody wants to play with him. He works hard to reach his goals.”

Farinaccio is the first Carabin to take home the Presidents’ Trophy, and the second straight linebacker to do so. 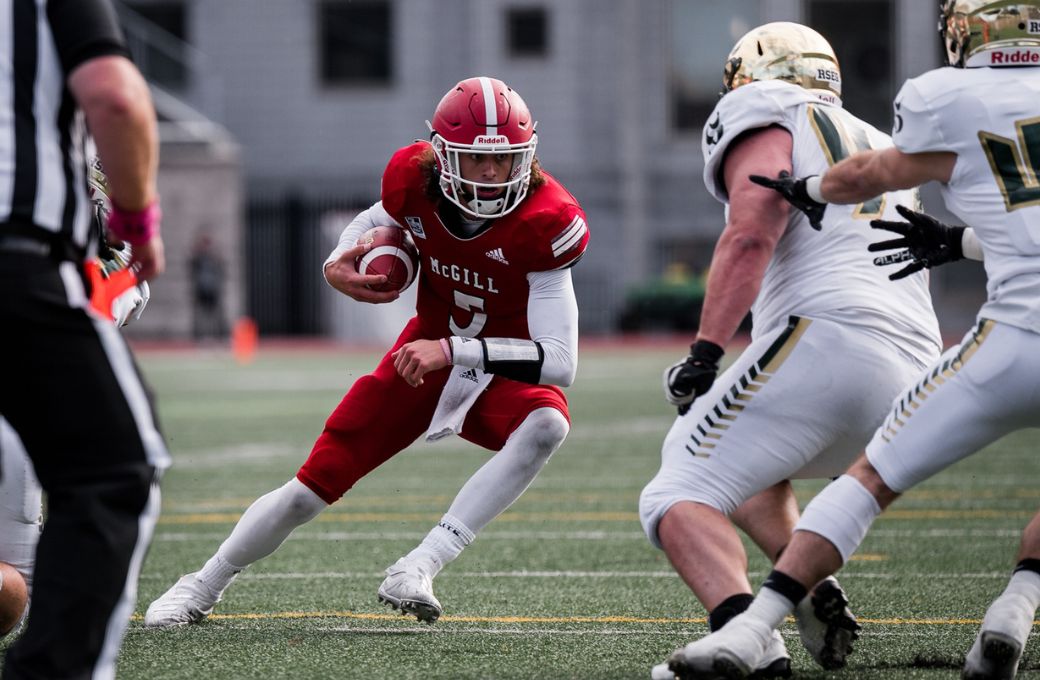 Eloa Latendresse-Regimbald was a dual threat for the McGill Redbirds this season. He led all rookie quarterbacks with 2004 passing yards, good for fifth overall in the country, and was 11th overall – tops among quarterbacks - in rushing yards nationally with 602. The Montrealer’s nine yards per carry led the nation, and he is the first McGill quarterback to be his conference’s rushing leader. He burst onto the scene on Sept. 3 against Laval, as he completed 21 passes for 391 yards and ran 11 times for 132 yards in his first U SPORTS game.

The 20-year-old physical education major Latendresse-Regimbald ranked second in the RSEQ in total offence with a combined rushing and passing average of 325.8 yards per game. He passed for 2,004 yards, completing 121 of 237 attempts for eight TDs, nine interceptions and a completion percentage of 51.1 per cent, passing for an average of 250.5 yards per game. A unanimous selection as the RSEQ rookie of the year, he had two 100-yard rushing games and two 300-yard passing games – both against eventual conference champions Laval.

“This young quarterback is very special and showed poise beyond his age,” said McGill head coach Ronald Hilaire. “A born leader, he adapted very quickly to the university level and improved every week. He has a good arm, is a fearless runner and has a very bright future.”

He is the first quarterback to win the award since Waterloo’s Tre Ford in 2017 and the third McGill player, following Michael Soles (1986) and Shaquille Johnson (2012). 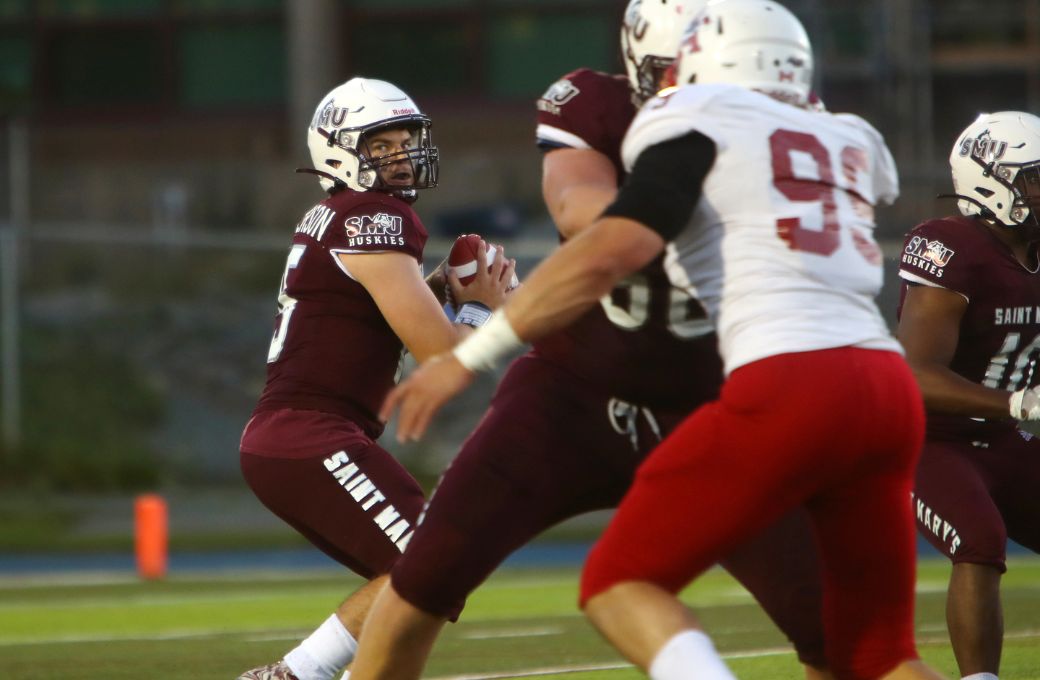 Duncan Patterson, a 6’0”, 200lb veteran quarterback, played in all seven games for the Huskies and finished the regular season with the second-most completions (86), passing yards (1143), yards-per-game (163.3) and passing touchdowns (8) in the AUS. He also had five interceptions and a 137.8 pass rating.

A fourth-year player and first-year MBA student from Bedford, N.S., Patterson was the recipient of the 2022 Sobey MBA Scholarship Award, the highest scholarship offered within the Saint Mary’s MBA program. A four-time Academic All-Canadian who graduated from Acadia in 2022 with a 4.0 GPA and honours, the veteran student-athlete is dedicated to his studies as well as giving back to the community around him.

Over the past year, Patterson has served as a volunteer offensive assistant coach and quarterback coach with the Nova Scotia U16 football team. He’s also a past coach with the Valley Bulldogs minor football program. In addition to his coaching, Patterson dedicates his time to Special Olympics Canada’s Marathon of Sport Motionball event, raising funds for the Special Olympics Canada Foundation. He’s also given his time to the CIBC Run for the Cure, Nova Scotia Alzheimer Society and Relay for Life events for the Canadian Cancer Society. At school, he's a study hall mentor, overseeing weekly team study sessions or tutoring younger teammates as they navigate their first year as student-athletes.

Patterson is the third Saint Mary's player to win the prestigious award, joining Ted MacLean (1995), and David Sykes (1992 & 1993). He becomes the first Russ Jackson Award winner from the AUS since Dan Parker of Mount Allison in 2005. 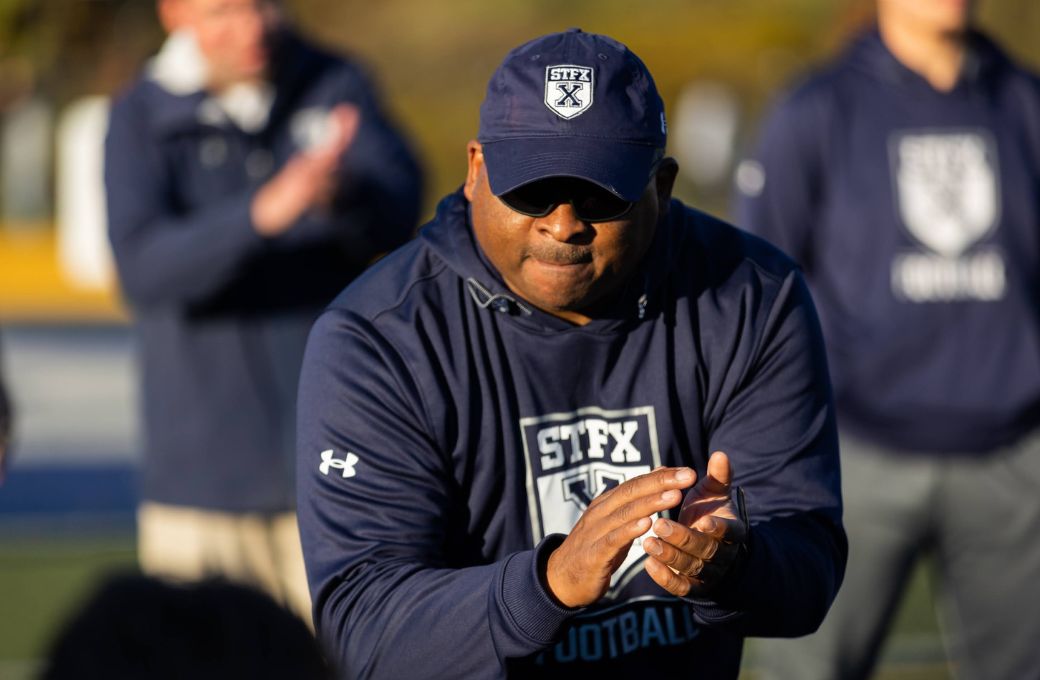 In his 14th year in charge at STFX, Gary Waterman led the X-Men to an undefeated 8-0 record and their second straight Loney Bowl championship – the fifth overall in his tenure. He is a first-time winner of the Frank Tindall Trophy after winning the award at the conference level five times (2015, 2016, 2018, 2021, 2022). His X-Men currently have the longest active regular-season winning streak in the country (15 games), a run that began on Oct. 26, 2019.

Waterman has a career coaching record of 66-55, including regular season and postseason play.

“Gary Waterman is, first and foremost, an outstanding person.  We are so proud of the work Gary has put into building our football program,” commented Leo MacPherson, the STFX athletic director. “He drives a successful team culture through deep connections, caring and core values; it all starts with him as the value-set leader for the program.”

The 2022 Canada Life Vanier Cup is on Saturday at 1 p.m. Eastern time on CBC TV and TVA Sports. Live streaming of the contest between the Saskatchewan Huskies and the Laval Rouge et Or is also available on CBC’s digital platforms (CBC Gem, CBCsports.ca and the CBC Sports app) and on TVASports.ca with a valid subscription.