The win gave the Vikes their second straight national title, the first back-to-back banners since 1994 and 1995. It was also the 13th championship in program history and first on home turf since 2008.

Anna Mollenhauer got the Vikes on the board in the sixth minute when she unleashed a tomahawk in front of the net to beat Amanda Hodgert on the near side.

The two-time All-Canadian wasn’t done there, as two minutes later off a penalty corner, Mollenhauer used another tomahawk to power one past Hodgert.

For her efforts, Mollenhauer was named the U SPORTS national championship MVP.

“The crowd was amazing tonight. We heard them throughout the entire game,” said Mollenhauer. “Last year at York, it was exciting to play in nationals, but it was nothing like playing here on home turf. It was really cool to have alumni come cheer us on.”

The Vikes kept piling on in the first quarter when after a great save by Hodgert on Leina Dueck in close, Ashton Aumen cracked a hot shot past the Woodham, Ont., native to put the Vikes up 3-0.

Katherine MacMillan, the reigning Liz Hoffman Award winner as U SPORTS Player of the Year, got going in the second quarter for the Gryphons. She got a blade on an exterior shot by Lauren Marcolini, but Vikes goalkeeper Robin Fleming punched it out of play.

In the third quarter, MacMillan got on the board when Judy Cristante blocked a shot on the Vikes goal line with her body. That save resulted in a penalty stroke for MacMillan and she ripped one past Fleming in the top left corner.

Shortly after, MacMillan was on a two-on-one and gave it up to her teammate Alexa Corrado, but Fleming pounced on the play and made the diving save.

“We don’t know what we would do without Robin,” said Mollenhauer. “She’s so good. She has our backs no matter what. It’s really exciting knowing someone is behind us if and when we make mistakes. She always cleans things up for us.”

Just before the end of the third quarter, Mollenhauer received a penalty stroke after a Gryphon defender made an intentional foul inside the shooting circle.

Looking for the hat-trick, Mollenhauer fired high on the blocker side, but Hodgert made the incredible diving stick save to preserve the score.

In the fourth quarter, OUA All-Star Kayla Magarelli was in on Fleming, but the keeper from Duncan, B.C., stacked the pads to shut her down.

Mackenzie Janzen appeared to add one for the Gryphons in the final minutes of regulation, but the umpires claimed she scored from the outside and disallowed the goal that would brought the Gryphons within one.

“As long as our players left it all on the field, we won’t have any regrets and I thought we played our hearts out today,” said Gryphons head coach Michelle Turley. “Even though we were down 3-0, it didn’t feel like a 3-0 game. It was a very competitive game and there was no quit in us.” 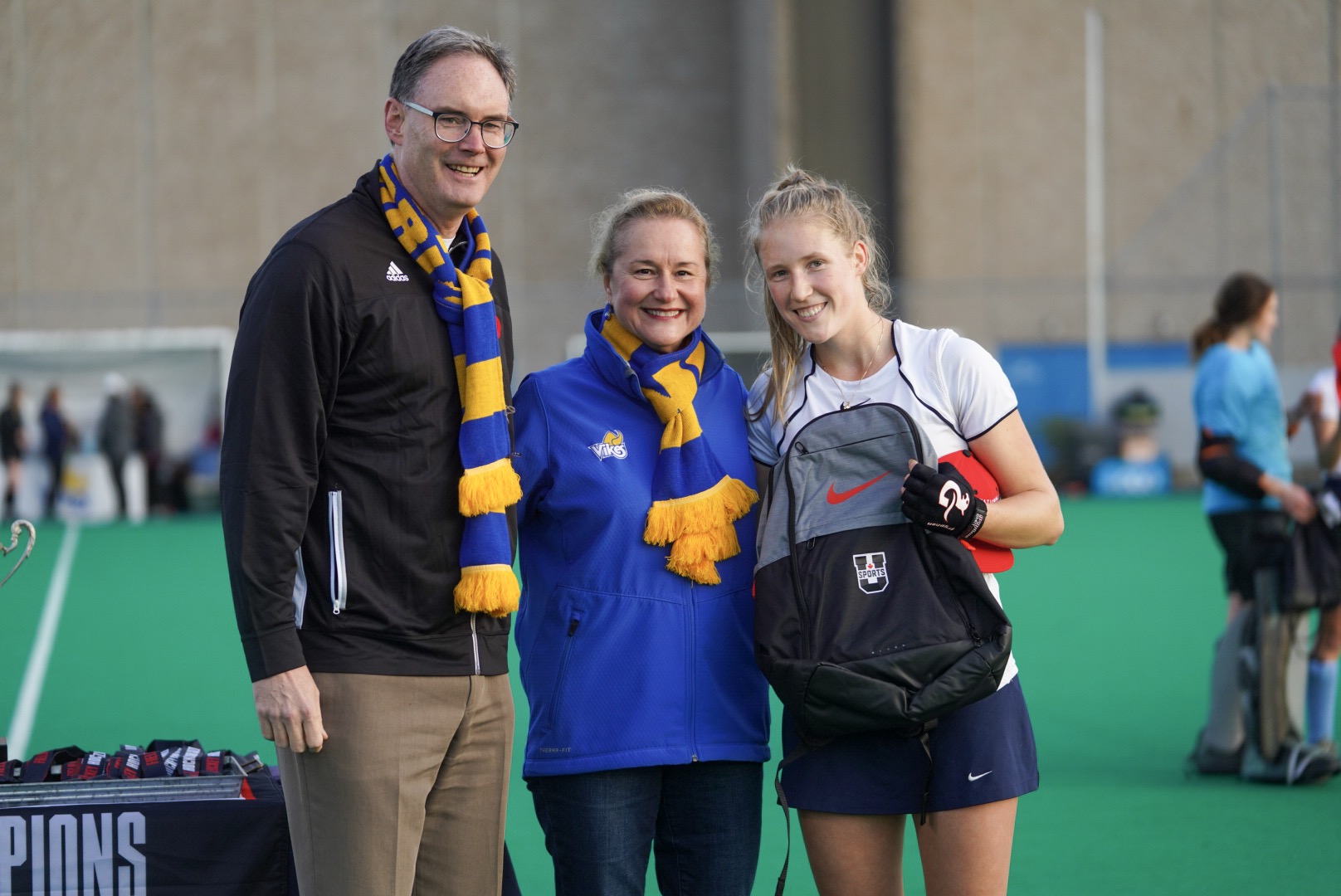 “We moved (Anna) up for hits from the outside to generate more offence and she create more chances for herself and she is also very good on the penalty corners,” said Beecroft. “We’re lucky to have her. She could have decided to go try out for the national team this year, but she wanted to get her studies done and play with this group.”