Laurentian guard Kadre Gray was honoured with the Mike Moser Memorial Trophy as U SPORTS men’s basketball Player of the Year for the second consecutive season Thursday night, as the national award winners were celebrated at the annual All-Canadian gala.

UQAM centre Alix Lochard captured the Dr. Peter Mullins Trophy as Rookie of the Year, while Queen’s forward Tanner Graham earned the Ken Shields Award for Student-Athlete Community Service for his outstanding contribution both on and off the court. Carleton guard Marcus Anderson took home Defensive Player of the Year honours and Calgary’s bench boss Dan Vanhooren received the Stuart W. Aberdeen Memorial Trophy as Fox 40 Coach of the Year. 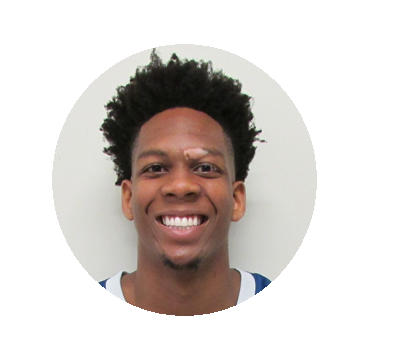 He started his university career with a splash three years ago, and after another standout year on the hardwood, Laurentian’s Kadre Gray (Toronto, Ont.) has added another piece of hardware to his growing trophy case – a second consecutive Player of the Year recognition.

Just when you thought he couldn’t find another gear, he did just that. The accolades go on and on for Gray, with the 2018-19 Player of the Year honour representing the latest on his ever-expanding resume. The third-year star was once again the standout for the Voyageurs en-route to their repeat trip to the postseason, but he was also a leading figure amidst the conference and country as a whole. Gray topped the nation in both scoring (31.0 PPG) and was third in assists (6.2 APG), while also pulling down an impressive 7.4 rebounds per contest. His production was something to behold, but he also provided it efficiently, as he managed his offensive output on 48.8 per cent shooting from the floor. 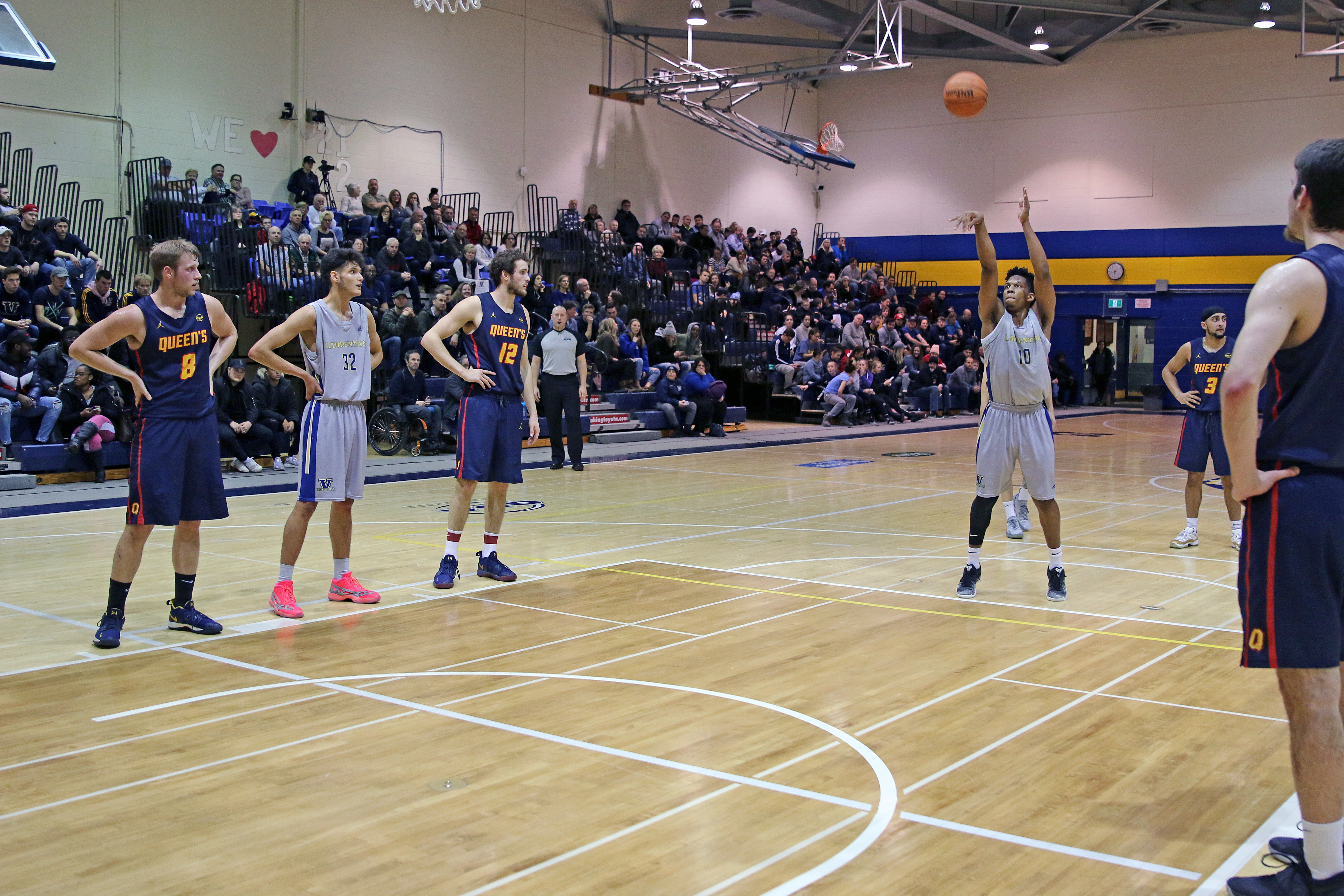 Gray, who is also a First Team All-Canadian, also took his talents beyond the university game this season as a member of Team Canada. The reigning OUA Male Athlete of the Year and U SPORTS BLG Award Winner was also given the opportunity to suit up for the red and white as part of their FIBA World Cup 2019 Americas Qualifiers against Venezuela and Brazil, and after putting a stamp on his award winning season with a 45-point performance against the then-No. 1 Ryerson Rams, he was also recognized as U SPORTS Athlete of the Week, which further epitomizes his elite-level talent and deserving recognition once again this year.

“Kadre's work ethic continues to shine bright.  Never satisfied with his skill set, he is always looking for ways to improve and refine all aspects of the game,” said Laurentian head coach Shawn Swords. “It's an amazing accomplishment to do it once and now, to be named MVP twice, is truly a testament to his willingness to learn and improve. The Kadre effect has spread throughout our community as well. It is great to see him support our local youth and realize the positive impact he has on everyone.”.” 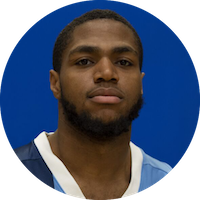 In his first season at the university level, Alix Lochard led the way and won Rookie of the Year honours. He was not only the Quebec Conference’s leading scorer with his 18 points per game average he also led the league in rebounding with 8.4 boards per game. The 6-foot-7 forward also led the RSEQ in blocks with 0.9 per game. A versatile player, Lochard was also ranked fourth with 1.9 steals per contest. The Citadins’ star also led the league with an 85 per cent free throw percentage and ranked fourth in field goal percentage (55 per cent). 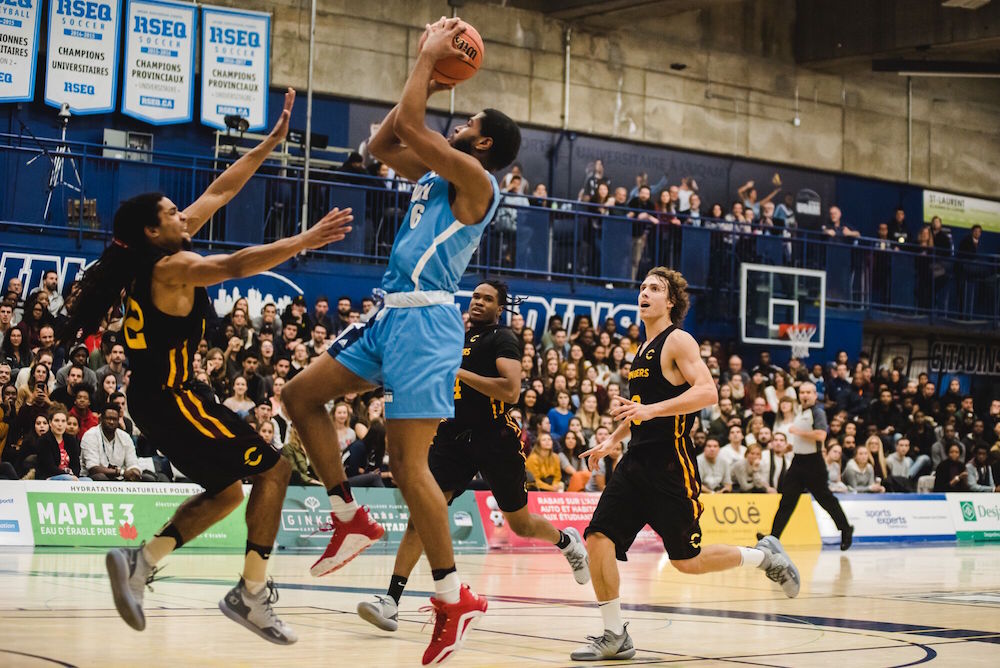 “In the 15 years of our young basketball program, Alix is the most touted recruit and came with a wealth of experience after being named the CCAA player of the year in his last season at Montmorency Cegep,” said Carabins head coach Mario Joseph. “He has a way of making people around him better and is always present when the game is on the line.” 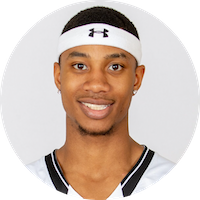 A standout on the defensive end was Marcus Anderson (Brampton, Ont.), who after another impressive campaign limiting the opposition, has earned back-to-back Defensive Player of the Year awards.

The fourth-year guard was a focal point for the team’s top-ranked mark in points against. His length and athleticism has caused teams headaches since he entered the league in 2015-16 – earning all-rookie honours that season – and his 1.7 steals per game average (T9 in OUA) is just one example of how the reigning OUA and U SPORTS Defensive Player of the Year can impact the game for the nation’s top-ranked squad. 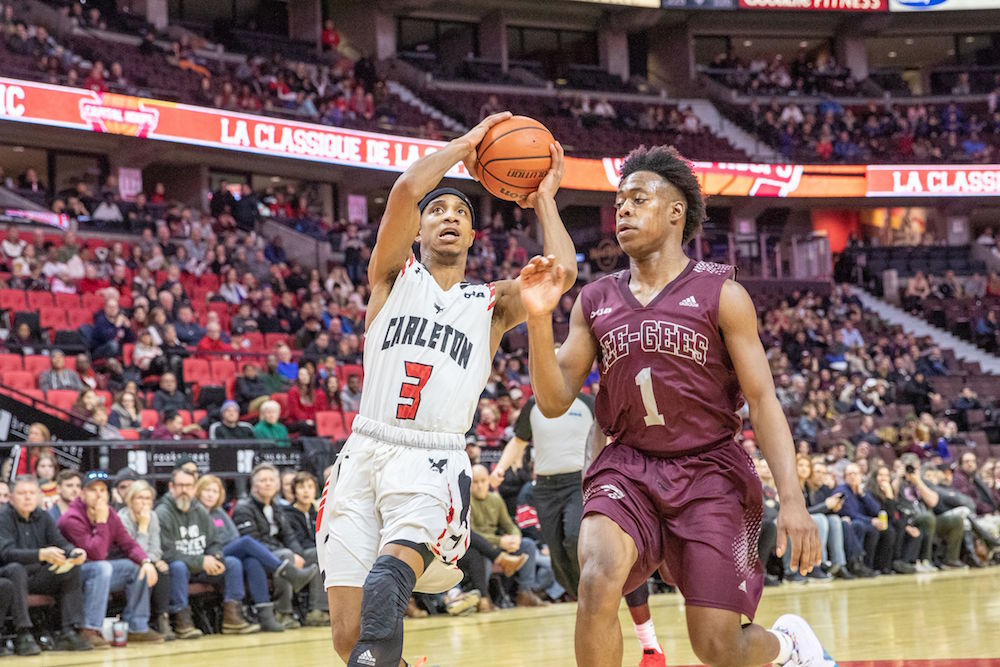 “Marcus is a great leader on and off the court,” said Carleton head coach Dave Smart. “He is a hard worker and a key part of our team defence. He’s very deserving of this award.” 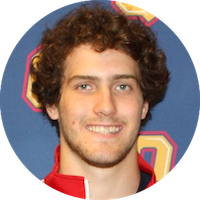 It has been a decorated five-year career for Queen's Gaels forward Tanner Graham (Kingston, Ont.), but he saved his best campaign for last with 15.6 PPG, 8.1 RPG, 3.1 APG. After picking up OUA all-rookie (2014-15) and third-team all-star (2017-18) honours along the way, Graham has turned his productive fifth season – both on and off the court – into this year's Ken Shields Award.

Graham, who finishes his career ranked third on the Gaels' all-time scoring list, has earned four Academic All-Canadian honours during his Queen's tenure. Aside from being one of the more versatile and productive players on the hardwood since his arrival, he has also earned a cumulative 4.0 GPA and is well on his way to a fifth Academic All-Canadian award. He has also contributed to the wider school and community as a whole, including: volunteering with Revved Up, a program that works with individuals with physical and/or mental disabilities; taking part in the student-athlete initiative Gaels Care to work with elementary school children in need of mentoring; and organizing the 500 Miles for Parkinson's Basketball Tournament, an event that Graham started and has raised over $6,000 for in support of former Gael Harry McMurty. 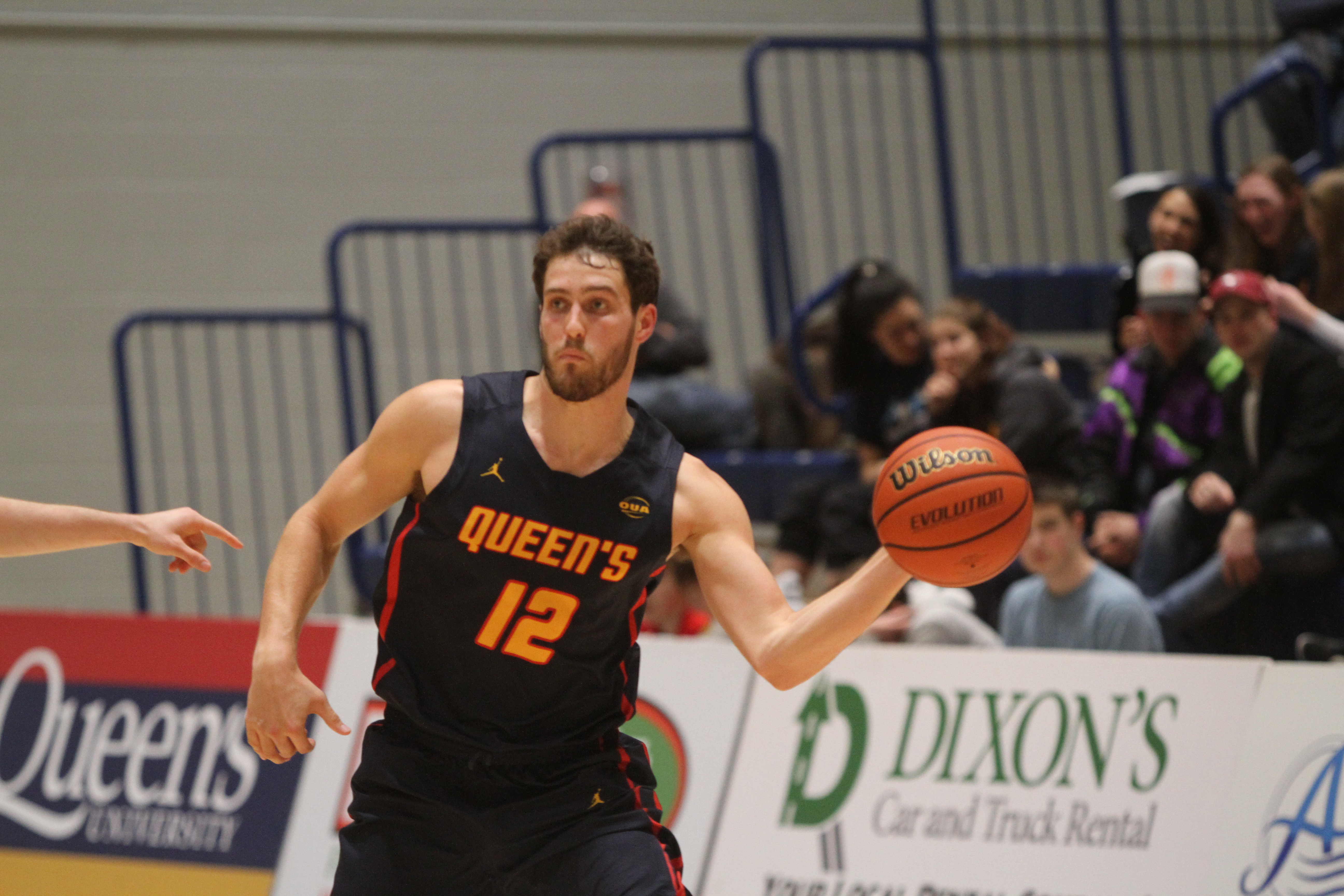 “Tanner is what being a student-athlete is all about.  He was all about seeing how good he could be as a person – on the court, in the classroom, and with helping others,” said Queen’s head coach Stephan Barrie.  “The U SPORTS experience is about someone like Tanner.  Playing for the love of the game, devoted to your education and growth, and doing what you can to be a good citizen in your community who seeks out opportunities to be a positive influence.  He will be the bar by which other players in our program will be measured.  His excellence in all aspects of the student-athlete experience made him a role model for teammates and staff alike.  Everyone in the Queen’s men’s basketball program is exceptionally proud that Tanner has been recognized with this honour.” 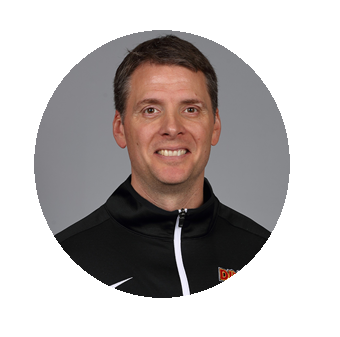 For the first time in his career, Dan Vanhooren is the Fox 40 U SPORTS Coach of the Year.

The Calgary Dinos head coach earns the win this season after guiding the Dinos to a perfect 20-0 regular season mark, just the fifth in Canada West history.

Calgary's spotless record was also the first in program history, as the Dinos dominated the competition during their CW and U SPORTS title defence. 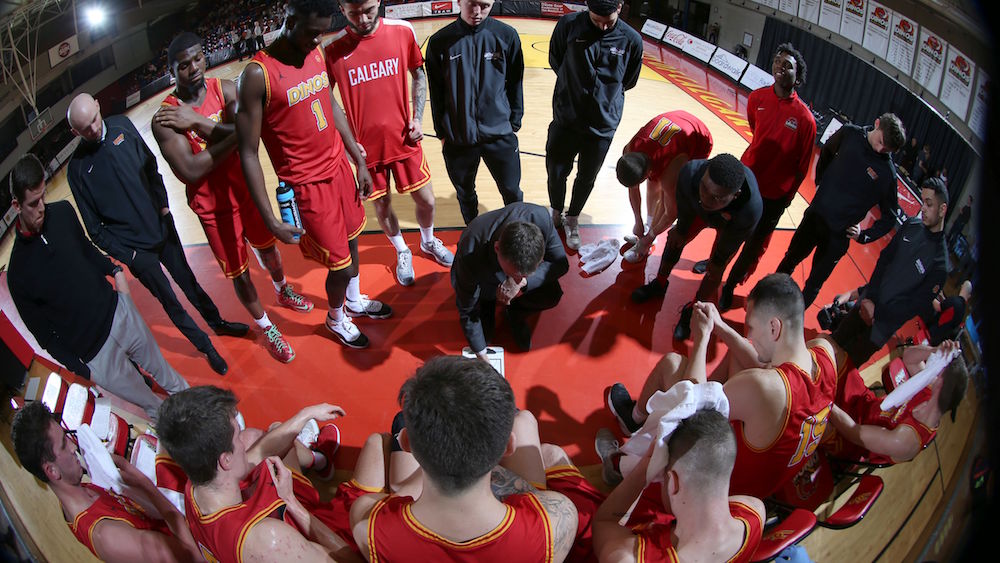 "Following up on a U SPORTS national championship with an undefeated season is no easy feat. Dan continues to lead a program that has become the hallmark of consistency over the past decade in Canada West,” said Dinos Director of Athletics Jason Kerswil. “His ability to bring out the best from his student-athletes on a daily basis is a testament to culture that he has developed within the Dinos. Fiercely passionate about student-athlete development, he has established levels of expectation that fuel performance on the court and in the classroom.”