The UBC Thunderbirds punched their ticket to the gold medal game with a 1-0 victory over the Acadia Axewomen on Saturday afternoon at Centennial Stadium.

Similar to most games this tournament, both teams exchanged scoring chances deep into the second half.

“That was a really close game. Both teams were going at it for the full 90 minutes,” said Thunderbirds keeper and Player of the Game Emily Moore. “They had a lot of good chances and we were lucky enough to put one away at the end. We have to give props to Acadia, they did a great job today.”

Axewomen keeper Sarah Charnock dangerously bobbled a high-arching shot from the Thunderbirds with Alyssa Hunt nearby waiting for a rebound. Charnock recovered quickly to get in position when the fourth-year forward one-timed the lost rebound.

With the play heading the opposite direction, Jacqueline Stevens tried to pick out the top right corner, but her volley curved just wide.

Both teams were fairly even in the first half, with corner attempts notted at three and Acadia leading 5-4 in shots on target. 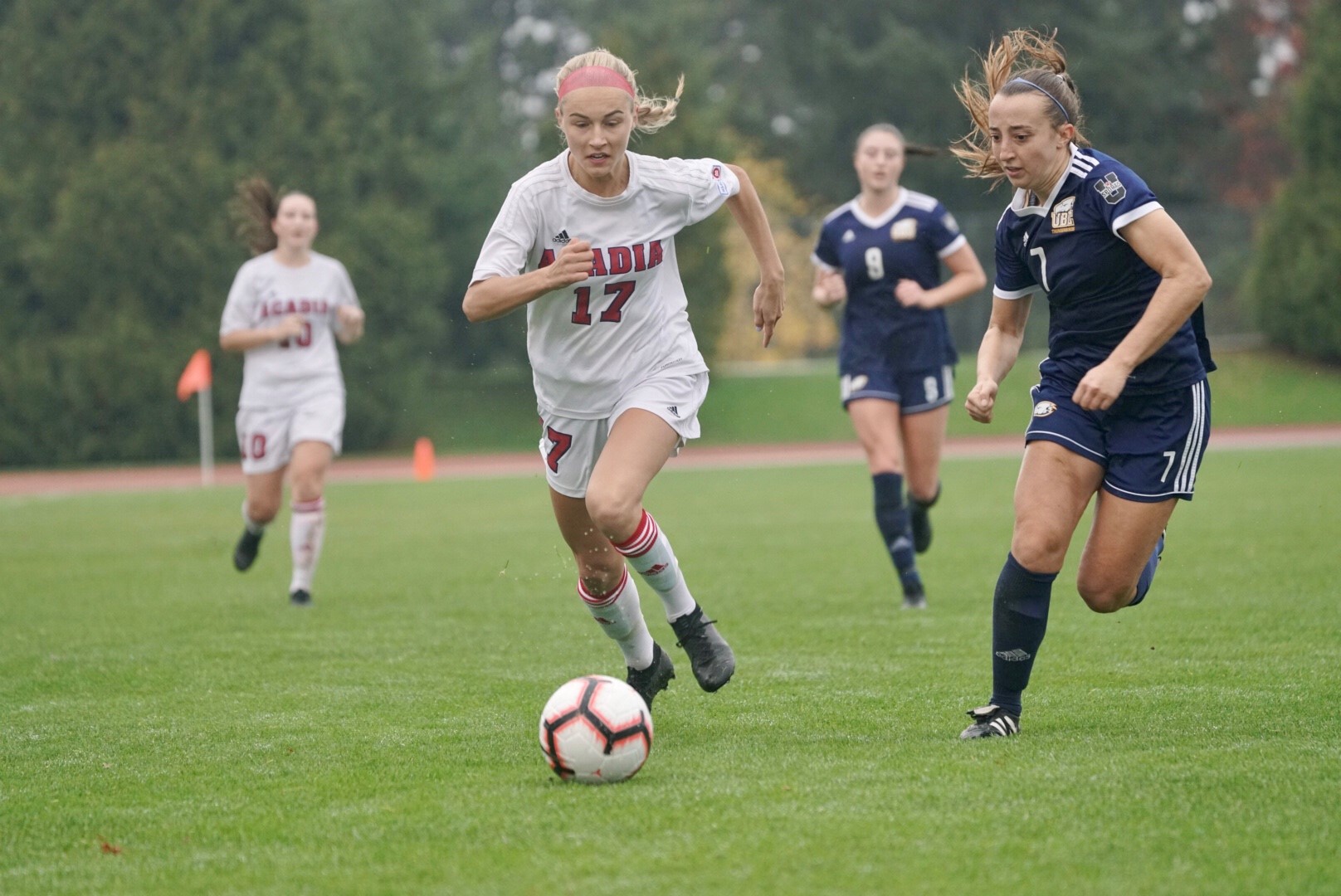 Off a free kick 12 minutes into the second half, Charnock got a few fingernails on a strike by Jacqueline Tyrer to swat it over the crossbar.

Down the other way, Emily Moore pulled off a similar save for the Thunderbirds when she punched a strike from Alexandra Scovil over the crossbar and out of play.

In the 76th minute, a Thunderbird corner by Tyrer bounced around in the box. Katalin Tolnai and Hunt both took whacks at it, but couldn’t squeeze it through the maze of bodies in front of the net.

One minute later, Charnock bobbled a strike by Natasha Klasios and found Danielle Steer, who was in the right spot at the right time on the doorstep. The third-year forward slammed home the rebound for the victory.

One minute later, Charnock bobbled a strike by Natasha Klasios and found Danielle Steer, who was in the right spot at the right time on the doorstep. The third-year forward slammed home the rebound for the victory.

The Thunderbirds will play the winner of the Calgary Dinos and Toronto Varsity Blues in the championship final tomorrow afternoon at 6 p.m. ET / 3 p.m. PT.

“These games are games of inches. We just kept a good mindset and stayed in the present moment,” said Moore. “Tonight we will watch video of U of T or Calgary and try and get the best idea about what they are going to do tomorrow.”

“That was a really intense game, but we kept going all the way to the end. We’re disappointed, but happy that we pushed through and kept competing,” said Harnish. “We’ve been in this situation before. We will just get together, forget today, play our game tomorrow and we will be fine.