This weekend’s football slate is headlined by a conference battle between the top two seeds in the RSEQ on Sunday. 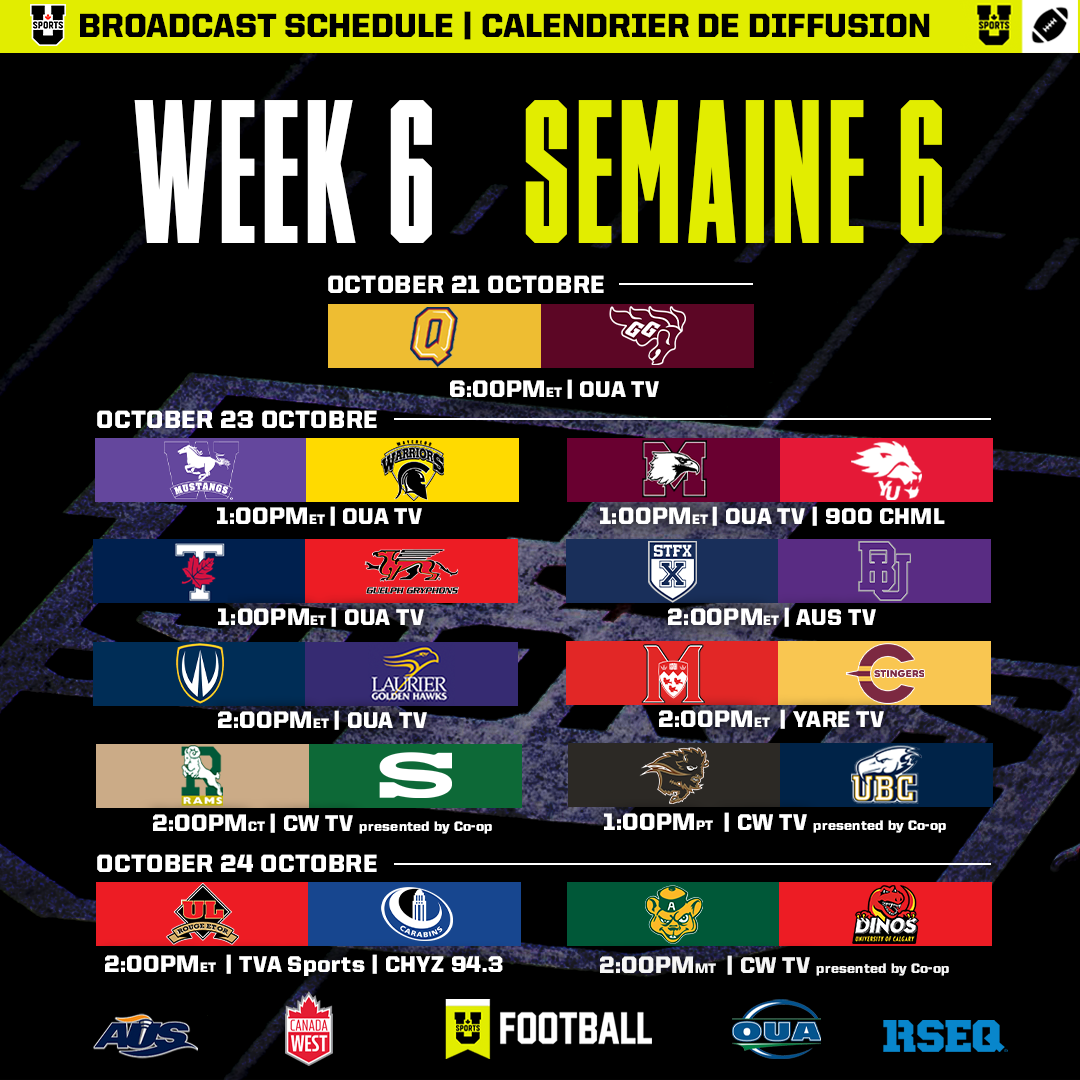 OUA action picked up on Thursday, with the No.5 Queen’s Gaels defeating Ottawa Gee-Gees 30-12.

Queen’s running back Rasheed Tucker led the way for the Gaels with 124 rushing yards and three touchdowns including a 12-yard fourth-quarter touchdown run to seal an undefeated season for the Gaels. Jean-Paul Cimankinda scored the lone touchdown for the Gee-Gees.

The Western Mustangs will travel to Waterloo to take on the Warriors in hopes of retaining the top spot in the OUA West.

The Mustangs are coming off a commanding 54-4 victory over the Windsor Lancers, where three players reached the endzone on the ground. Keon Edwards ran for 171 yards and two touchdowns.

Last week, Waterloo was defeated by the Guelph Gryphons 27-10, despite the Warriors leading in total yardage 354-217. Warriors quarterback Tre Ford threw for 159 yards and a score as well as 171 rushing yards before being sidelined in the third quarter with an injury. Waterloo will look to break above .500 with a victory but has a tough task ahead of them with Western’s stout defensive unit.

McMaster is looking to jump back into the win column after being upended by Laurier 22-0. To stay in the playoff picture, the Marauders will need a road victory over the York Lions as well as help from OUA West Division opponents.

Coming off a loss at the 51st Red & Blue Bowl at the hands of cross-town rival University of Toronto Blues, the York Lions will be searching for their first win of the season. Lions linebacker Kevin Musai will be the driving force behind York’s defense. The Cleveland, OH. native had six tackles against the Blues.

There are plenty of playoff implications on the line as the Varsity Blues (2-2) get set to visit the Guelph Gryphons (2-2) at Alumni Stadium.

Guelph, coming off a pivotal victory over Waterloo will look stay undefeated at home. Receiver and kick returner Clark Barnes earned U SPORTS player of the week honours after bringing a kickoff 108-yards to the house against Waterloo.

Toronto will look to stay rolling after an emphatic 25-2 victory over York in the 51st Red & Blue Bowl.

Playoff implications are on the line as the Windsor Lancers visit the Laurier Golden Hawks this Saturday.

Winsor will look to bounce back after 54-4 shellacking at the hands of Western, while Laurier will look to keep the momentum after topping McMaster 22-0.

Leading the AUS with a 3-0 record, the StFX X-Men will have to visit a surging Bishop’s Gaiters squad who are currently on a two-game winning streak after defeating Saint Mary’s and Acadia.

Bishop’s Keagan Hughes will be the focal point of the Gaiters defense after receiving USPORTS Player of the Week honours. In their victory over Acadia, Hughes led the Gaiters with 13 total tackles and three tackles for loss.

StFX’s Malcolm Bussey is looking to have another strong out after reaching the 100-yard plateau for the second time this season in the X-Men’s 21-19 victory over the Mount Allison Mounties.

The McGill Redbirds will look to turn things around when they visit the Concordia Stingers this Saturday.

McGill is coming off a devastating loss to the Sherbrooke Vert et Or, where four costly turnovers upended the Redbirds’ winning aspirations.

Concordia, who sits in the middle of the pack in the RSEQ conference will look to bounce back after facing two tough customers in Laval and Montreal in their previous outings.

In a Top-10 showdown, the Regina Rams will battle their provincial rivals Saskatchewan Huskies on Saturday.

Since 1999, the Huskies have a 28-11 record over the Rams. The Rams have to contend with Huskies running back Adam Machart, who ran for 221 scrimmage yards against the Alberta Golden Bears, receiving U SPORTS offensive Player of the Week honours in the process.

Regina, coming off a tough OT loss against the UBC Thunderbirds will have to contend with both Machart and standout quarterback Mason Nyhus to get back in the win column.

The Manitoba Bisons are heading West, where they’ll face the UBC Thunderbirds in hopes of keeping the unbeaten season alive.

The UBC Thunderbirds also have a taste for the dramatic, as they secured their first win of the season against the Regina Rams last week in overtime. The Thunderbirds house an explosive offensive unit that ranks fourth in the nation with 488.3 yards per game.

The top-ranked Montreal Carabins will play host to their conference rival, Laval Rouge et Or, this Sunday in what shapes up to be a highly-contested battle.

In their first meeting of the season, Montreal squeaked out an 18-17 victory over Laval, thanks in large part to quarterback Jonathan Sénécal, who went 26-40 through the air for 286 yards and a score. His chemistry with receiver Hassane Dosso was on full display in this one, with the first-year receiver hauling in 11 catches for 140 yards and a touchdown.

While Laval lost their first meeting to Montreal, their 220 points for and 73 points against both lead the conference. The combination of offensive firepower from quarterback Arnaud Desjardins and a rushing offense that leads the nation in total yards could lead to fireworks at CEPSUM.

Reeling from a tough loss to Manitoba, the defending Vanier Cup champions Calgary Dinos are set to host the Alberta Golden Bears this Sunday.

The Calgary Dinos, who fell to No.7 in the national rankings, will look to bounce back through a potent offense that leads the nation in total, rushing and passing yards per game.

Alberta, coming off a loss to Saskatchewan, will also look to get back into the win column as the Battle of Alberta is renewed on Sunday afternoon.