At the 53rd ArcelorMittal Dofasco Vanier Cup, two teams, each historically dominant and both oh-so-familiar with the nation’s top prize, will battle for the current title as the country’s best.

Representing Ontario University Athletics (OUA) is the Yates Cup champion Western Mustangs, who trounced the Acadia Axemen 81-3 in the Uteck Bowl for the right to challenge for the national title. The Mustangs have won the Vanier Cup six times, the second most in history. They’ll contest for their seventh in their record 13th appearance in the game. The team won the title for the first time in 1971 and would win a Vanier Cup in each consecutive decade before that streak was halted in their only appearance of the 2000s: the 2008 contest against the same team they’ll face in 2017 – the Laval Rouge et Or. 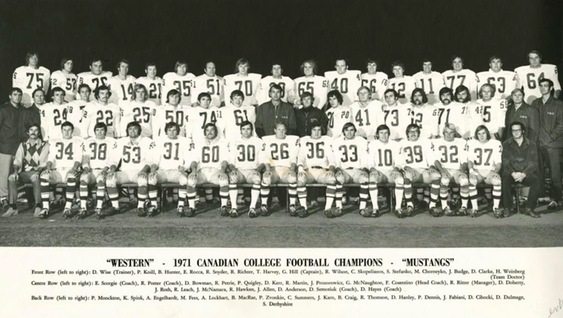 The best of the Réseau du sport étudiant du Quebec (RSEQ), the Dunsmore Cup champion Rouge et Or have won nine Vanier Cup championships, the most of any team. Their first appearance and victory was in 1999 and since they’ve made a total of 10 appearances. Last weekend they defeated the Calgary Dinos 35-23 in the Mitchell Bowl in a rematch of last year’s Vanier Cup for the right to challenge for this year’s U SPORTS football national championship. On Saturday they’ll take on the Mustangs in familiar territory at Tim Hortons Field in Hamilton, where they hoisted the Cup last year. The site is also where Ivor Wynne Stadium once stood, where Laval triumphed over 44-21 Western in the 2008 game. 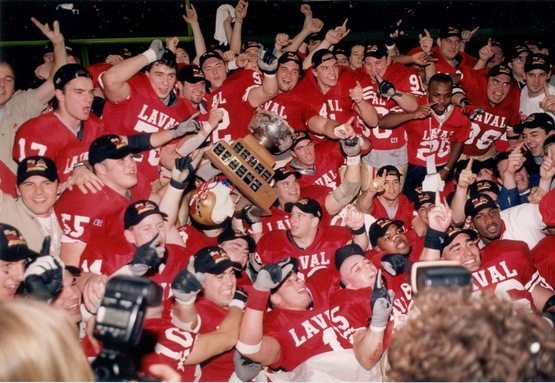 Combined, Western and Laval’s championships make up almost a third of the Vanier Cup’s 52 champions. This year, one of the game’s most winningest teams will add another tally to their total. In their second meeting on the grandest stage of U SPORTS, both teams will continue to shape the game’s legacy. Here are some of the ways so far that the teams have left their mark in Vanier Cup history:

1.    The Yates Cup was an early precursor to the Vanier Cup.  The Maritimes did not have regular intercollegiate football until after the Second World War (and included non-university teams until 1965), while the Hardy Trophy competition in Western Canada began in 1922, with a hiatus between 1948 and 1958.  Therefore, the Yates Cup, although representing Central Canada (Ontario and Quebec), was considered the de facto national title game for the first sixty years of intercollegiate play (1898 to 1958). Western holds the most Yates Cup championships, with 31.

2.    Upon the revival of the Western Intercollegiate Football League in 1959, the Churchill Bowl, which was already in existence as an east-west exhibition game since 1953, transitioned to become the first unofficial national championship game, pitting the winners of the Yates and Hardy Cup games. The Churchill Bowl only lasted two years – 1959 and 1960 – because both games were “blowouts,” resulting in little public interest.  The first game saw Western University defeat the University of British Columbia 34-7; while the second game ended in a 46-7 defeat of the University of Alberta at the hands of McGill University.

3.    Mike Labadie changed the course of Canadian university football history with his vision of an elite francophone program.  Interest in Quebec high school football began to swell in the 1980s; before this the sport was purely an Anglophone pursuit.  A physical education teacher and football coach at Champlain College, Labadie envisioned a university program that could cater to francophone athletes that would not otherwise pursue the sport after the college/CEGEP level in Quebec.  Labadie approached former coach and general manager of the NHL’s Québec Nordiques Maurice Filion, who in turn sold the idea to Québec City businessman and Laval alumnus Jacques Tanguay, part-owner of several minor-league sports franchises.  Without this initial idea, and Labadie’s persistence, the most successful program in Canadian university football history would not have been established in 1996.

The Saint Mary’s Huskies almost completed a “three-peat,” losing to Laval in 2003, while Laval was denied a “four-peat” by McMaster in the double-overtime 2011 Vanier Cup (it would have been their second of potentially four championships in a row). A championship by Laval in 2017 would make them repeat champions for a third time.

6.   The rematch between Western and Laval comes nine years after the first time they met in the Vanier Cup. The teams were involved in the only two instances in history that two teams have had a Vanier Cup rematch in subsequent years:

7.   Laval and Western also each played in the only two games in Vanier Cup history that required overtime to decide the champions. Both games incidentally also required double-overtime.