UBC outside hitter Kiera Van Ryk was honoured with the Mary Lyons Award as U SPORTS women’s volleyball Player of the Year Thursday night, as the national award winners were celebrated at the annual All-Canadian gala.

Waterloo outside hitter Sarah Glynn captured the Mark Tennant Award as Rookie of the Year, while her bench boss Richard Eddy took home the Thérèse Quigley Award as Fox 40 Coach of the Year. Saint Mary’s libero Hannah Stienburg earned the Marilyn Pomfret Award for Student-Athlete Community Service for her outstanding contribution both on and off the court.

For the second year in a row, UBC Thunderbird Kiera Van Ryk has landed a U SPORTS major award.

After being named the nation’s top rookie a year ago, Van Ryk has now been the U SPORTS Player of the Year.

The Canadian national team member was dominant yet again for UBC, topping the country in kills with 398, points with 489 and service aces with 68, while also ranking eighth in Canada West in hitting percentage at .263. Her 68 aces also stands as the second-highest single-season total in conference history. 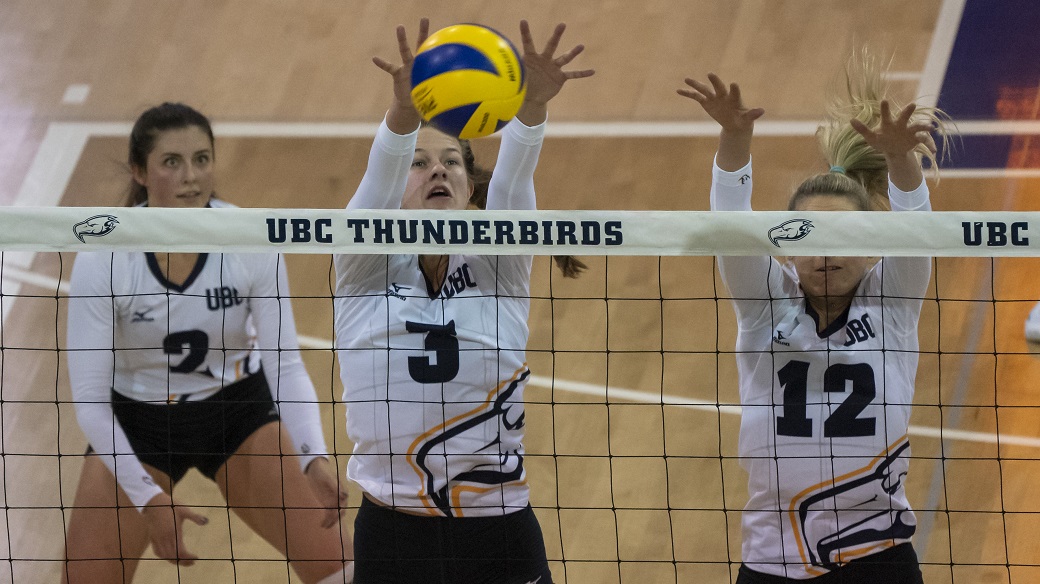 The second-year Surrey, B.C. product was named the Canada West Female Athlete of the Month twice this season, taking home the honour in both November and January.

“I’m very happy for Kiera. Without question she’s a very impressive player and has carried a heavy load for us this season,” said UBC head coach Doug Reimer. “For her to accomplish what she has as a second-year player is so impressive. Her high-end is incredible and I’ve been impressed with her development over the season in terms of her consistency of play. Beyond her velocity and skill in attacking and serving, she works so hard and contributes so much defensively and in her passing as well.”

After a dominating rookie season as a member of the Waterloo Warriors, Sarah Glynn has been named the 2018-19 U SPORTS Rookie of the Year.

A native of Fredericton, N.B., the 6-foot-2 left side finished the regular season with 3.34 kills per set, the seventh most in the OUA and tops among rookies. Glynn put down 234 kills in 70 sets of action for a hitting percentage of .230. She also added 26 service aces, 23 blocks and 152 digs for a remarkable rookie campaign. 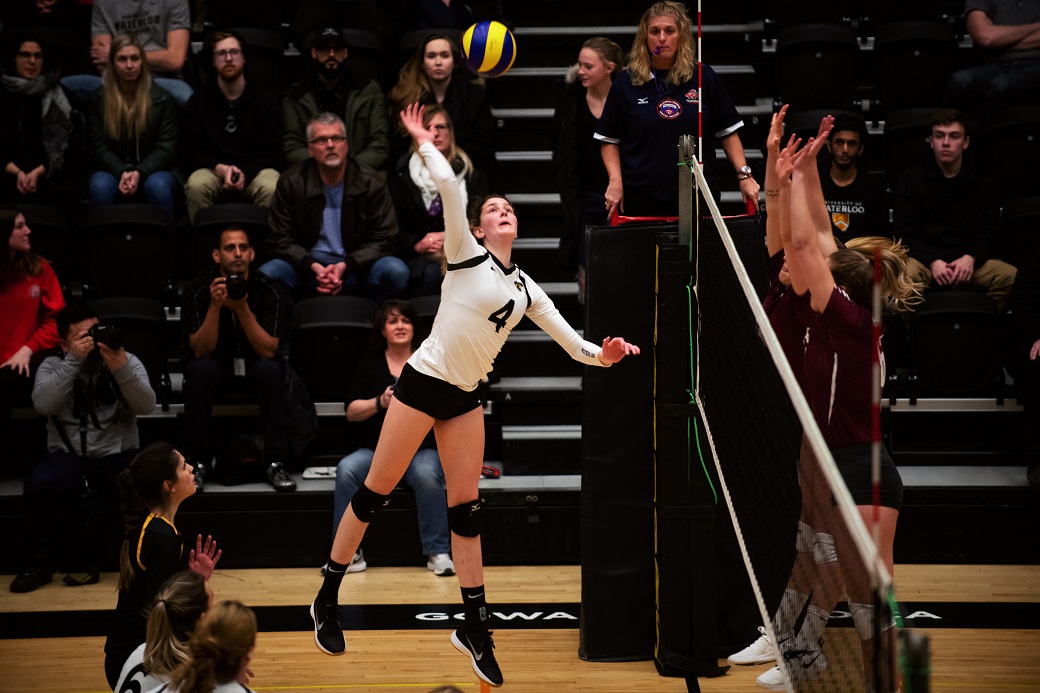 Glynn came into Waterloo as a highly sought-after athlete and a perennial all-star and member of New Brunswick’s provincial team from 2015-18. In 2016, Glynn was named to the Team Canada Youth National program, as one of the nation’s top 40 volleyball players in her age group.

“Sarah is a smart player that sees the game exceptionally well. She has great vision of the court and can pick apart a defence with a variety of powerful and crafty attacks. Her attack percentage of .230 was in the top 3 for left-sides in the OUA, which is an incredible achievement for a first-year player.”

“Sarah is a worthy recipient of this award, amongst an excellent crop of U SPORTS rookies,” said Waterloo head coach Richard Eddy. “Our team is very proud of her accomplishment, and this is an incredible start to what will no doubt be a decorated U SPORTS career.”

A year after being a finalist for the honour, Saint Mary's Huskies fourth-year libero Hannah Stienburg is the 2018-19 recipient of the Thérèse Quigley award given to the women's volleyball student-athlete who best exhibits outstanding achievements in three areas: volleyball, academics and community involvement.

Stienburg, a commerce student from Halifax, N.S., played in 19 matches and 56 sets for the Huskies this season, finishing with 114 digs (2.04 digs per set).

In the classroom, she has maintained a cumulative GPA of 4.0 for the past three years and is on pace to be named an Academic All-Canadian for the fourth time.

Her passion has allowed her to pursue many volunteering and fundraising opportunities throughout the course of her years at Saint Mary's University; while inspiring her surrounding community, students, and teammates. 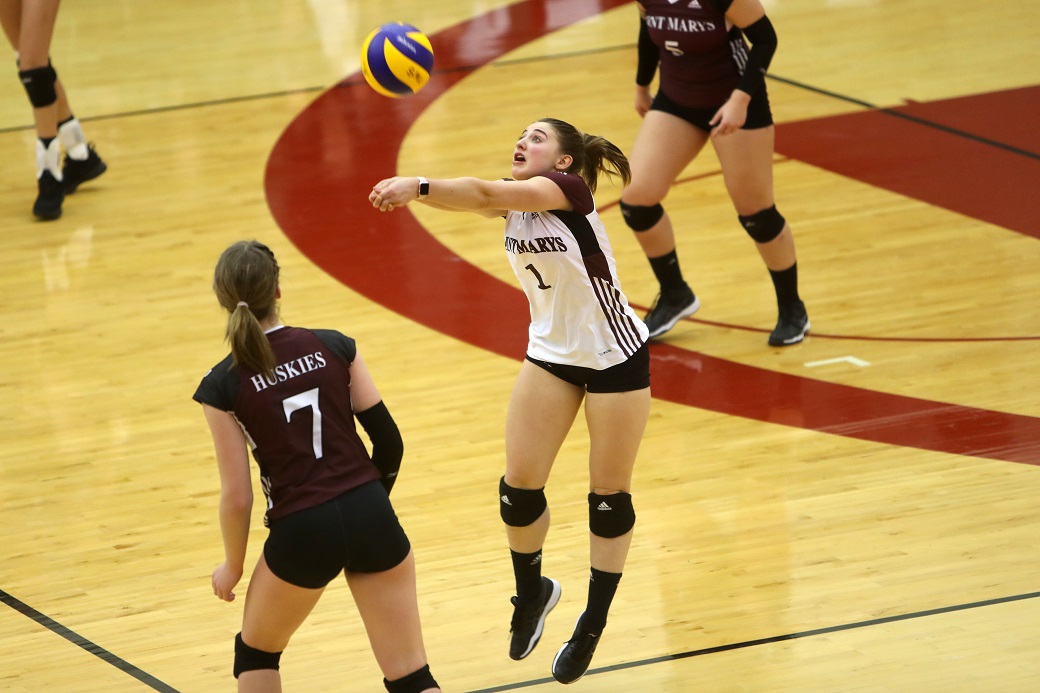 She continues to head the Huskies Move for Inclusion program, a sports program which she created for youth in the community with intellectual and physical exceptionalities. This year, she has over 40 student-athlete volunteers and 25 kids who together create relationships through activities and sport during events planned throughout the year.

Last year, she organized Saint Mary's first MotionballU fundraiser, a fundraiser for Special Olympics Canada. It was a huge success raising $12,500 with 120 Huskies athletes participating, and was the most successful inaugural Motionball event at any Canadian university. She is currently organizing this years' MotionballU event planned for Mar. 21, with the goal of raising $14,000. Her main objective is to create more relationships between Special Olympic athletes and Saint Mary's athletics.

For the third year in a row, Stienburg organized The Coldest Night of the Year walk, raising money and awareness for the homeless, walking 5 km within the Halifax community.

Stienburg has built a relationship with the Ronald McDonald House, organizing multiple fundraisers, and in particular raising $950.00 to donate to the House this year.

As a member of SAMHI (Student Athlete Mental Health Initiative) she, along with the other members, raise awareness for mental illness in addition to raising money through school events.

As Athletic Council President, she has been involved in many initiatives such as the Saint Mary's Community Room Food Bank and Start2Finish.

In 2017-18, Stienburg won the SMUSA Miguel Emillien Memorial Award, which is awarded to an outstanding student-athlete who makes major contributions to the area of student affairs.

In addition to this, she is organizing a fundraiser for Cystic Fibrosis in March, and is the head coach of both the Central Junior High boys' volleyball team and the under 12 girls Halifax Hurricanes team.

“Hannah is what being a U SPORTS student-athlete is all about.  She excels in the classroom, on the court and in the community,” said Huskies head coach Darren Russell. “She inspires all those around her daily with her hard work ethic and exceptional desire to be the best person she can be.  Her kindness, generosity and desire to give back has touched multiple people at Saint Mary’s University and the surrounding community.  Everyone is so proud of what Hannah has done and will continue to do in the future!”

Leading the Waterloo Warriors to their most successful season in program history, Richard Eddy has been named the U SPORTS Fox 40 Coach of the Year, taking home the Marilyn Pomfret Award. Eddy is the first coach in program history to win the award.

Eddy led the Warriors to an incredible 17-2 regular season record while his squad reached as high as No. 3 in the U SPORTS Top 10. His Warriors then went on to finish 2-1 in the postseason, defeating Western in a thrilling come from behind five-set victory, to claim OUA bronze.

Eddy guided Waterloo to one of their best statistical seasons in sometime with the Warriors being among the elite in many offensive categories, including fifth in nation in service aces pet set (2.37), and eighth in hitting percentage (.219), while ranking fourth in the OUA in both kills per set (11.79), and in assists per set (11.01).

Along with Eddy’s Coach of the Year honours, four different Warriors players were named conference major award winners or All-Stars/rookies to go along with Glynn’s U SPORTS Rookie of the Year and All-Rooie Team honour - speaking to the depth he has been able to secure on the roster.

“As the cliché goes, I am sure Richard would say that this is a team award. This however does not happen without Richard’s vision and leadership, under which this program has evolved,” said Waterloo Director of Athletics and Recreation Roly Webster. “I am thrilled for the individual recognition Coach Eddy and some of our student-athletes have received, however I am most proud of the direct reflection this has on our program, and the pride our graduating student-athletes should have in knowing that they were instrumental in capturing the OUA bronze medal.

Preview: Trinity Western earns No.1 seed ahead of national tournament