Leading up to the 2017 Summer Universiade taking place in Taipei City Aug.19-30, U SPORTS profiles the athletes set to don the Maple Leaf in our weekly feature series "Meet Team Canada."

After playing for Christian Faith Academy in North Carolina, NCAA Division I programs Illinois State and Cleveland State University, Kaza Kajami-Keane’s trials and errors led him to the guiding light of success - the Carleton Ravens men’s basketball team. “Looking back I wish I could have excelled at the rate I wanted to at the Division I level. But honestly, I’m a guy who really believes God has a plan and everything works out for a reason, says Kajami-Keane. “Coming to U SPORTS and playing for (Ravens head coach) Dave (Smart) is something that I feel is a great accomplishment and that is what I wanted to accomplish the most.”

Besides accomplishing his university goals, another accomplishment Kajami-Keane has long wished for is to be the best basketball player in his family. That aspiration came from growing up watching his two older sisters dominate on the court. Today, the debate remains open, as his sisters are now watching their little brother dominate like they used to.

As Kajami-Keane enjoys his busy offseason, he and his family recently took some time during the Nike Crown League finale held at Ryerson University to share their story about a rare Canadian basketball family that saw all three siblings enjoy successful basketball careers. “I was the kid that was always in the gym watching my sisters play and running around,” says Kajami-Keane, when asked about growing up as the youngest of three. “As I got to an age where playing became competitive, our natural instincts were to compete against each other. I wanted more than them but it was never out of spite, we knew we were in this together and continue to have each other’s back no matter what.”

Kajami-Keane, who will soon be representing Canada at the 2017 FISU Summer Universiade in Taipei City, will become the second member of his family to accomplish that feat, following in the footsteps of his eldest sister, Kalisha, who played for the Canadian women’s basketball team at the FISU Games in 2009. Kalisha, who currently plays in Australia’s WNBL for the Melbourne Boomers, starred for the Michigan State Spartans from 2007 to 2011, winning the Big 10 Player of the Year in her senior year. Kalisha was also named a consensus First Team All-Big 10 selection, a WBCA All-American honourable mention and won many more awards throughout her university career. The Keane’s middle child, Tamika, also served as a mentor for her little brother, having enjoyed a successful four-year career at Cleveland State University.

However, it was Kalisha who asserted herself as the best basketball player in their family years ago, with the family’s patriarch, Hugh, recalling Kalisha being the first of his children to beat him in a game of one-on-one. “They’re good kids, they’ve learned to compete fair and the right way,” says Hugh. “The game of basketball brings rules, regulations, and the opportunity of providing teaching moments to kids. There is a referee, there are rules. It is a good disciplinary tool.”

Today, Kaza and Kalisha have each other’s back more than ever as they stand together as one of the few Canadian brother and sister duos to participate in the FISU Summer Universiade. “As a Canadian, I love the fact that my kids have all performed and represented the country on some level,” says Hugh Keane. “They’ve had an opportunity to travel and meet people from other countries and experience different cultures, which has certainly expanded their horizons.”

The right opportunity is what Kaza had long searched for before arriving at Carleton University in the nation’s capital during the summer of 2015. While Kaza, like many Canadians, dreamed of going to the U.S. to play Division I basketball, his experience of competing at the NCAA level was an arduous one. “I didn’t feel like I was at the place I wanted to be at because I just wasn’t developing. I thought I came in and was leaving the same way,” Kaza reflects. “That is not the way I wanted to go out playing basketball.” 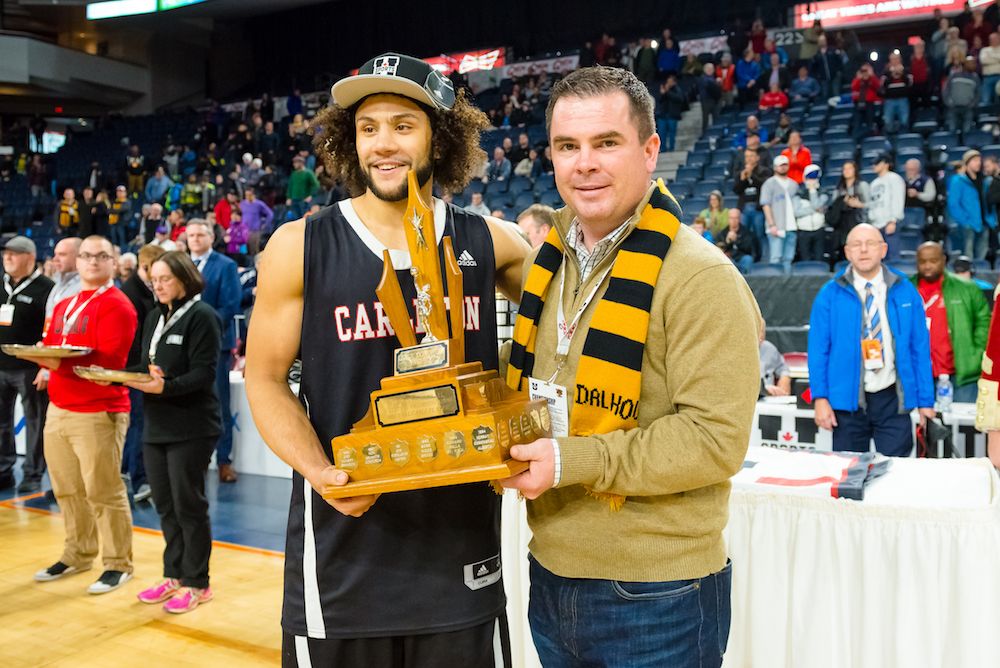 He decided to make a decision that forever changed his life; he called Carleton’s head coach Dave Smart and the rest is history. “I had known Dave since the time I played for Canada’s U17 team,” says Kaza. “The way he understands the game, his success as a basketball coach and how he transforms his players into men while getting the best effort from everyone was the major reason I chose to attend Carleton.”

Two years and two national championships later, Kaza is now finished his university career and battled the best basketball players in Canada at the 2017 Nike Crown League. “I don’t believe I was at this level two or three years ago,” says Kaza when asked about his basketball development. “But obviously transferring to Carleton and getting the information that I have from my coaches and playing under a great coach like Dave allows me to be at this level now, which I’m grateful for.”

Kaza put in the work that was required of him during his experience at Carleton, and it paid off in the end. The Ajax, Ont., native left the school with a pair of U SPORTS titles, two U SPORTS Second-Team All-Canadian selections, two OUA First Team All-Star nods, and one Jack Donohue Trophy as U SPORTS Men’s Final 8 MVP, which he collected in March. He also led the OUA in assists last season with 99 and won Carleton’s Male Athlete of the Year. Although Kaza has an impressive collection of honours and accolades, the debate over which Keane sibling has enjoyed the better career remains a hot topic.

“As a competitor, I can never really say (Kaza) surpassed me. But as a fan of the game, I’m a huge fan of his,” says proud sister Kalisha. “I think he plays the game at a high level. He’s come a long way.” With a successful finish to his university career, Kaza feels as though he has officially become the top baller in the family, but not without the help of his two sisters.

“I do believe I’m the best Keane,” he says, before paying respect to his siblings. “Kalisha’s passing skills and Tamika’s shooting and defensive abilities are the areas that I incorporate into my own game. By watching them and copying their games, it has helped me become the player I am today.”

Watch Kaza and Canada’s men’s basketball team in action from August 19-30 at the 29th Summer Universiade in Taipei City.