In an unexpected result, Mitton heaved 18.31 metres on her third attempt in the final, winning the competition by nearly 50 centimetres over her nearest competitor at San Paolo Stadium.

After qualifying fifth in the morning preliminaries with a top throw of 17.08, Mitton bettered that by 50 centimeters on her first attempt in the final, getting better with each attempt until her 18.31 measurement on the third. That set a standard none of the other competitors were able to match.

“It was overwhelming,” Mitton said of her experience atop the podium, watching the Maple Leaf raised. “It’s my first international medal, let alone to come out on top. It was a really proud moment – my coach and I have been working so hard, and it has been very up and down. It’s nice to finally have that moment. 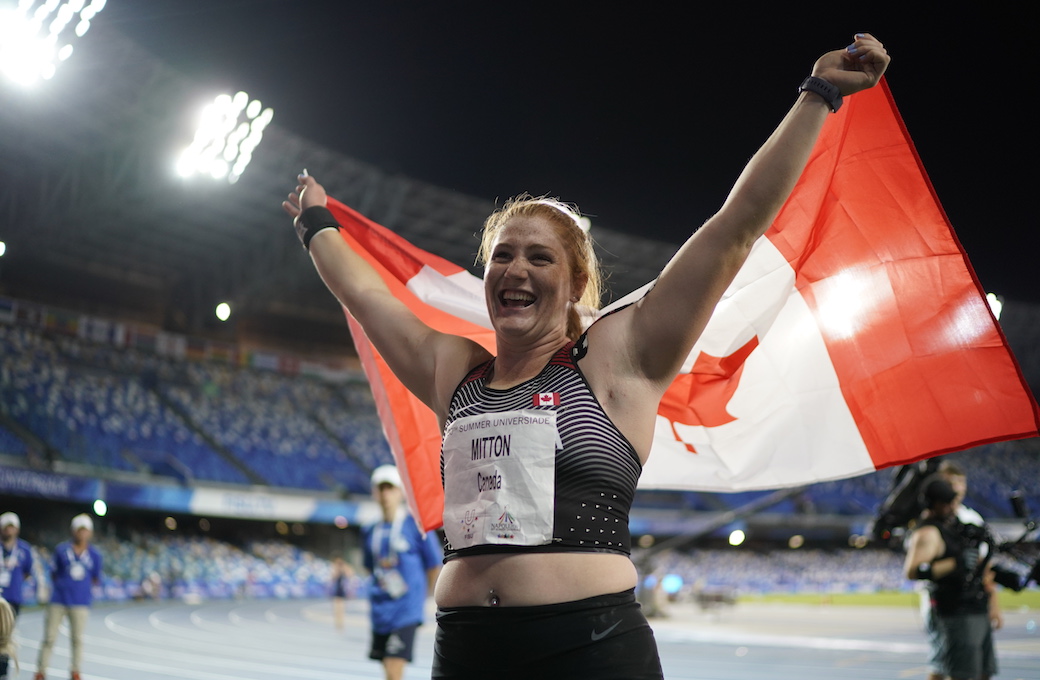 “I felt extremely prepared. It’s a long day – my first throw I was very nervous, it’s a big stadium and very overwhelming. After the prelims I went home, took a nap, and I felt a lot more ready to go tonight than I did this morning. I had more confidence, my warmup was good, and a lot of confidence heading into the final.”

“She had a great day, throwing bombs out there on every throw,” said Bob Westman, head coach of the Canadian track and field team in Naples. “She was ready, and she had an awesome night. We thought she was definitely a medal contender, and we couldn’t be happier for her.”

Canada was expected to win gold in the shot put, but the favourite was defending Universiade champion Brittany Crew, the Canadian record holder. Crew was the leader after the preliminaries with a top throw of 17.54 metres, but unexpectedly was not able to record a result better than 17.07 in the final, finishing a disappointing seventh.

“I’m physically exhausted,” said Crew after the event, which featured preliminaries and finals on the same day. “It’s like a double, so I’ve never done that before. We tried to practice it but you can’t really simulate. I didn’t handle it well.

“She just felt flat,” said Westman. “But to her credit, she gave it everything she had and she handled the whole situation with so much class. She put the flag around Sarah, it was a great moment, and Britt has such amazing things ahead of her. This is just a small dip in the road.”

Crew was quick to praise her teammate Mitton on her major international title.

“She’s my teammate. She’s worked really hard and I think she deserves it. I’m super proud of her. I’m happy if I couldn’t take home the gold, that she could get the job done and bring it home for Canada." 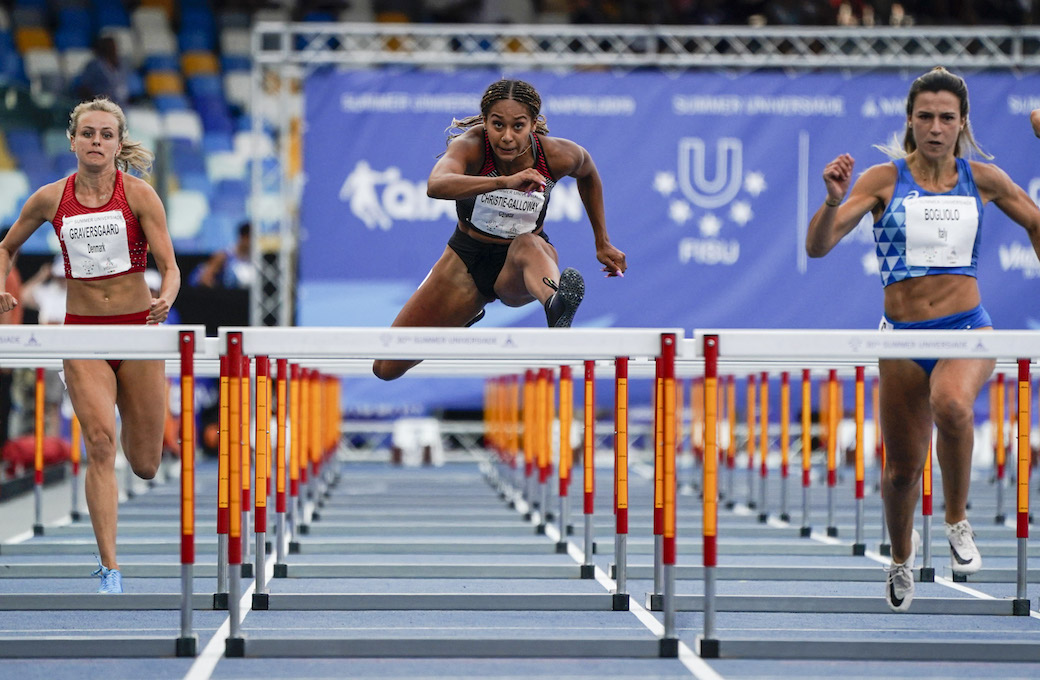 “I gave it my all,” said SpearChief-Morris. “I don’t think I could have done anything more or less. I obviously would have liked to come away with a medal for Canada but you know what, it will come when it comes and I’ll take it. I’ve been dreaming about this meet for four years, so I finally got to do it and made it to the final. I’m just really excited and happy, so times will come when they’re ready.”

Teammate Keira Christie-Galloway was also a semifinalist in the 100m hurdles but failed to qualify for the final by a whisker.

Elsewhere around track and field, Rachel Wolfs finished 12th in the women’s pole vault final with a top height of 3.91 metres. And in the women’s 3,000-metre steeplechase, Catherine Beauchemin found another gear on the final straightaway to finish sixth in a time of 10:02.92, while Jessy Lacourse crossed the line 11th in 10:18.67.

In the final event of the night, Kieran Lumb and Mike Tate both qualified for the final in the men’s 5,000 metres on Saturday. Lumb finished third in the first of two heats, finishing in 14:21.25, while Tate crossed the line in 14:12.20, good enough to finish fifth in the second heat. 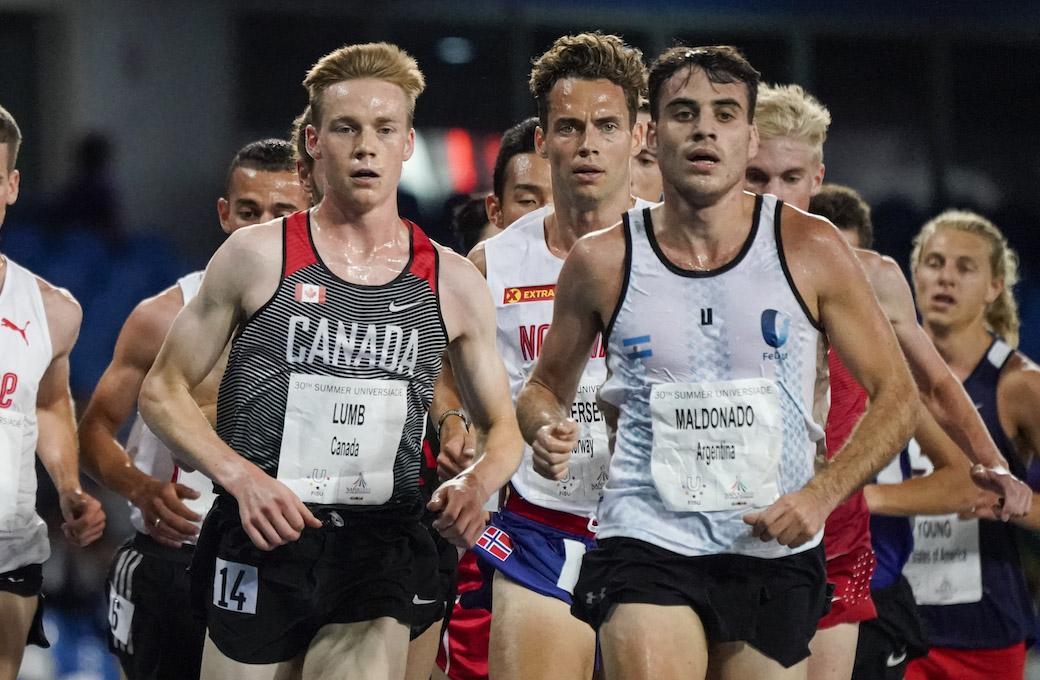 The women’s heptathlon also got underway Thursday, with a pair of Canadians in the field. Through four events, Skylar Sieben sits 13th with 2,976 points, while Bridget Deveau is 17th with 2,716 points.

Despite just the single medal after four days of competition, Westman likes the trajectory his team is on.

“There’s a lot of things you look at, and medals is one of them – that’s certainly what you’re always striving toward – but we’re converting a lot of athletes from the semis into the finals, and those are all a sign of what’s to come. As a track and field nation, we’re having a great meet, and a lot of those people who are making those finals but not medaling weren’t necessarily coming in ranked fourth or fifth, they were ranked a little bit behind.”

At Naples, Canada fell behind early thanks to a strong effort off the glass by Germany, falling 88-74 in the fifth-place game.

Canada finishes the Universiade with a 4-2 record and a sixth-place finish, a four-spot improvement over the 10th-place finish two years ago in Taipei City, Chinese Taipei.

Germany jumped out to a 16-4 lead in the first five minutes and maintained that advantage throughout the contest. They out-rebounded Canada by a hefty 47-22 margin, shooting 50 per cent from the field to avenge a 19-point loss in the preliminary round.

“They dominated us on the boards,” said Canadian head coach Shawn Swords. “We were expecting a different team, a more physical team, and we definitely saw it.”

Ali Sow and Brody Clarke each paced the Canadians with 12 points, with Munis Tutu adding 11. Tutu and Clarke were the Canadian leaders off the glass with six and five, respectively.

“I’m a little emotional right now, but getting an opportunity to represent Canada is the best experience you could ever have. It was awesome getting to compete with all these guys and put it all on the floor. Obviously we wanted a gold medal, but just the fact that we represented and came out here hard, we did a lot of good things in the past week. The experience was once in a lifetime.”

“I’m not sure U SPORTS gets a fair shake across the basketball world, but we have some great players, some great athletes,” said Swords. “For us to come together and play against basically professional players, our guys were able to match them and come together quickly. Moving forward, I hope to see a lot of these guys represent Canada again.”

At Nocera, the women's volleyball team finished eighth in the Universiade tournament following a 3-0 loss (16-25, 16-25, 16-25) to the Czech Republic at PalaCoscioni.

Despite four consecutive losses, the Canadians still improved their 2017 result in Taipei, when they finished 13th.

"We had a tough match with the Czech Republic," said Canadian head coach Laurie Eisler. "They are a very strong, seasoned team. They played consistently at a very high level. We played really well at times just not long enough to get the outcome we wanted. But I’m super proud of the team. They really fought hard to finish as high as we did. Just not quite good enough against these top teams but there were lots of learnings and there’s a really bright future for all of these athletes.”

Canada only took 65 minutes to defeat Ukraine, who took third place in Group A. Dylan Mortensen had an excellent match with 12 kills and a hitting percentage of .688. The Saskatchewan Huskies outside hitter added three blocks and two service aces. 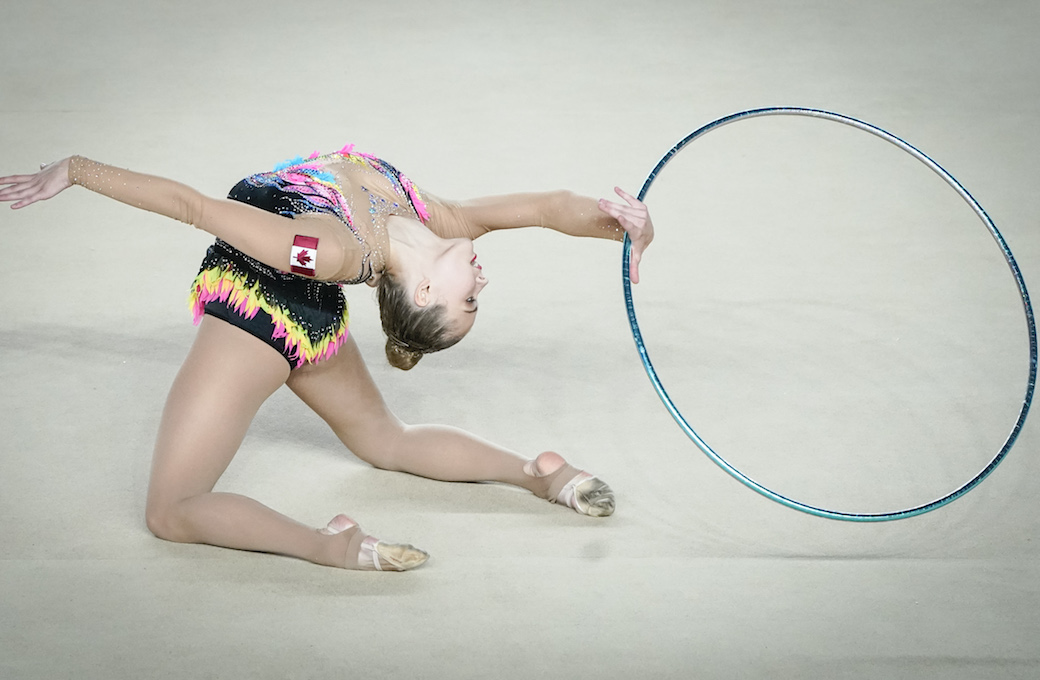 At Naples, Alexandra Chtrevenskii kicked off the individual all-around competition by placing 22nd in the hoop with a score of 14.400 points and 29th in the ball routine with 12.400 points.

The Concordia University student continues the competition with the clubs and ribbon Friday at 9 a.m. EDT / 6 a.m. PDT (3 p.m. local)

Canada wraps up competition Friday with Viviane Tranquille competing in the women’s 52kg event, as well as Jackson Carroll and Jordan Stewart in the men’s 63kg and 87kg classes, respectively.

From Fredericton to FISU: Kristian D'Amore’s journey to Naples