Canada added three more medals on Friday, on Day 8 of the 2023 FISU Winter World University Games, bringing the total to 11.

Two more podiums in long track speed skating, and a narrow victory for the men in curling in the bronze medal game, helped Canada secure the second-highest medal count of the country at a Winter Games. The best Canadian harvest is 18 medals at the Belluno Games in 1985.

Another medal is already secured, since the women's hockey team will play for gold on Saturday night after another convincing win. 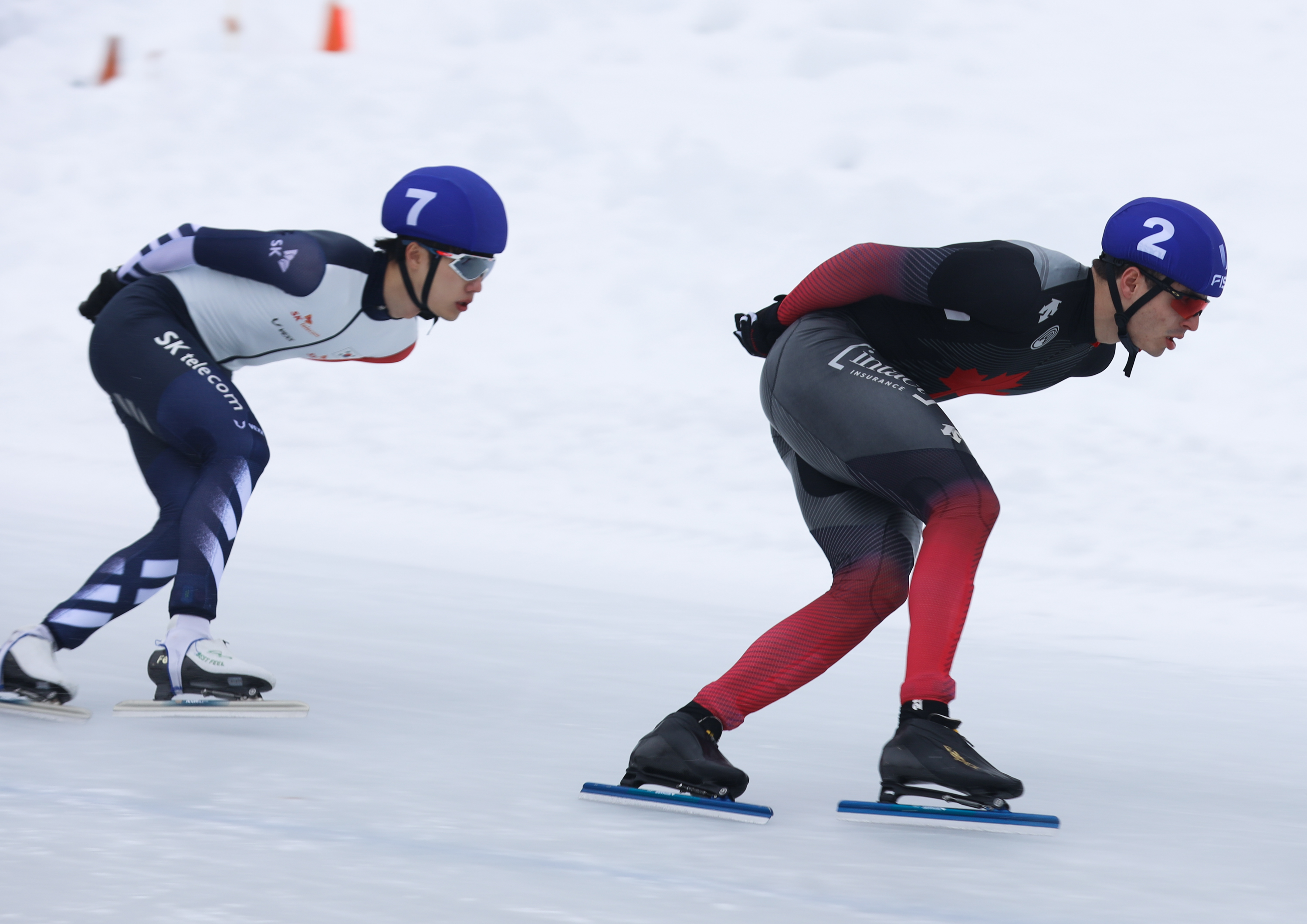 At the end of a crazy 16-lap race, La Rue was the first to cross the finish line, capturing his third medal at these FISU Games. The Finance student from Laval University previously won the bronze medal in the men’s 1,000m and pursuit events.

This was a second podium for Marcotte (also from Laval), who also placed third with the Canadian men’s pursuit team earlier this week.

On the women’s side, Rose-Anne Grenier took the 12th spot. Laura Hall had a good race until she fell in the 13th lap. She finished 22nd.

Canadian skaters were tremendously successful at the Olympic Oval this week with a medal haul of six. On top of La Rue and Marcotte, University of Calgary’s Laura Hall (gold at women’s 3,000m) and Laval’s Rose-Anne Grenier (bronze at women’s 3,000m) also stepped on the podium. 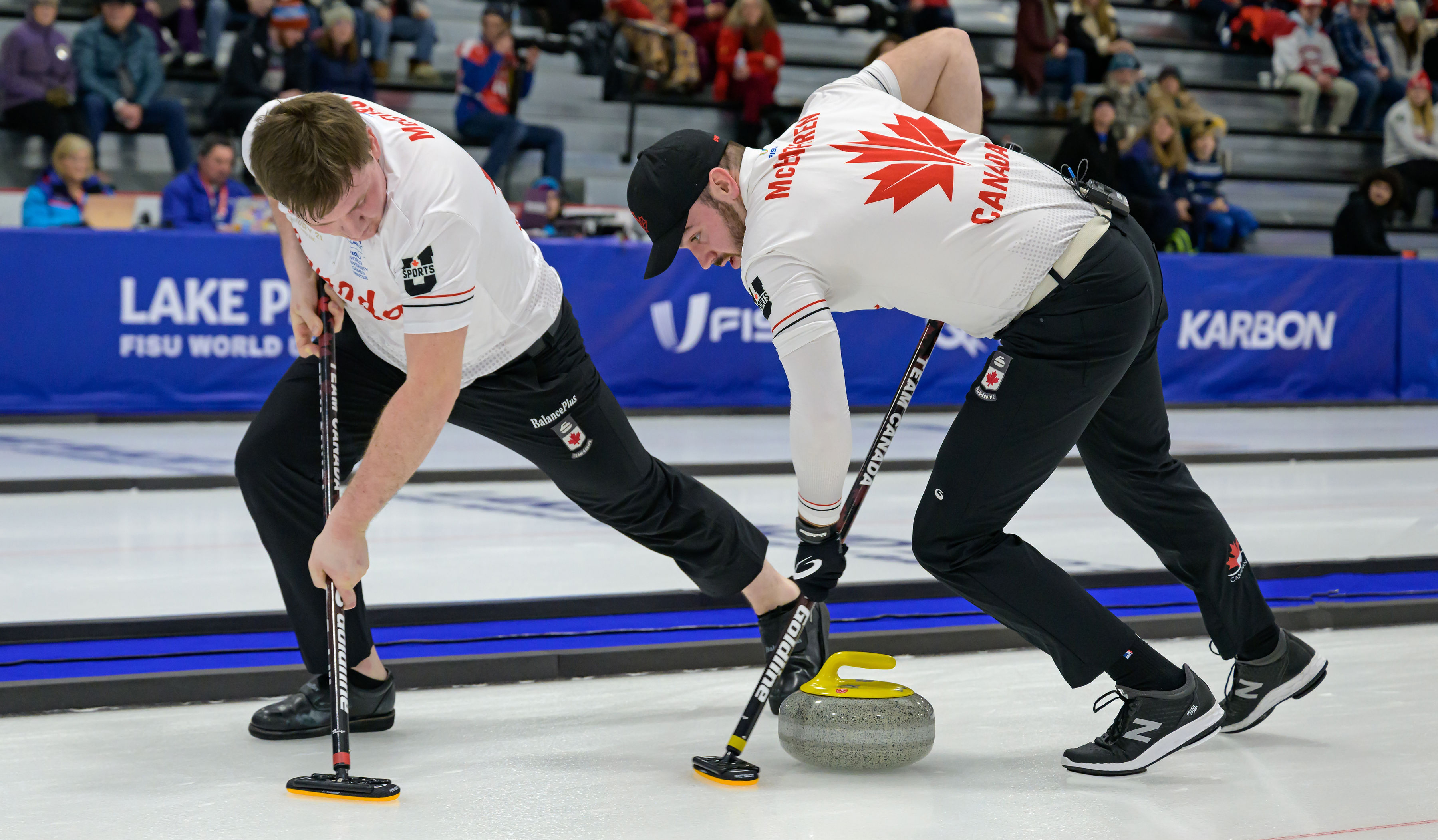 Canada skip Purcell, vice-skip Jeffrey Meagher, second Adam McEachren, lead David McCurdy, alternate Caelan McPherson, coach Anthony Purcell and team lead Helen Radford had their backs against the wall late in the game. Switzerland had all the momentum after blanking the seventh end and taking the last rock advantage into the eighth. Canada had to steal to find its way onto the podium. And they did just that, with a triple takeout.

Switzerland missed their last chance, and bronze was awarded to Canada after a hard-fought game. It became Canada’s 11th medal at these FISU Games. 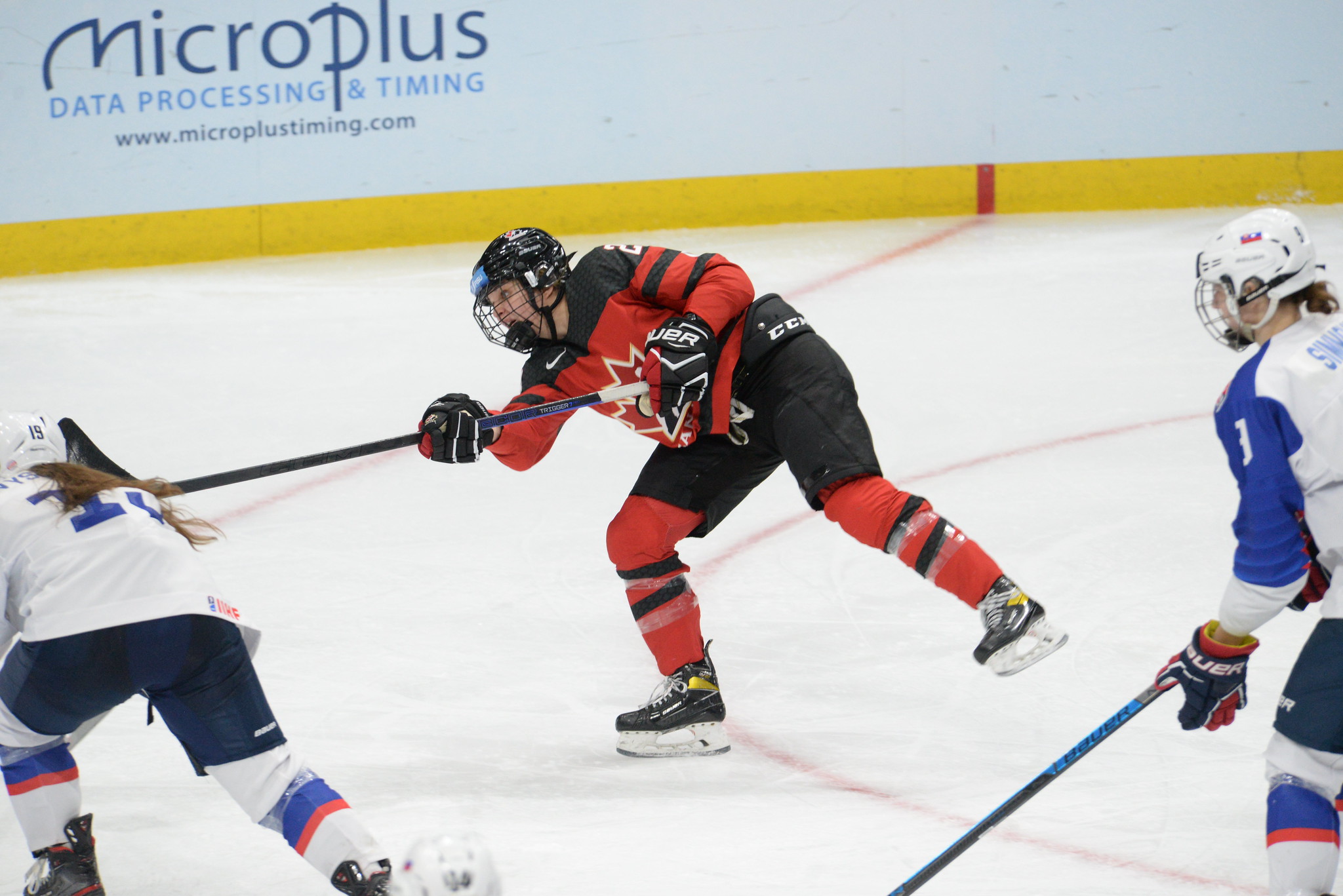 The win books Canada’s berth in the gold medal game, set for 8:30 p.m. EST on Saturday against Japan. 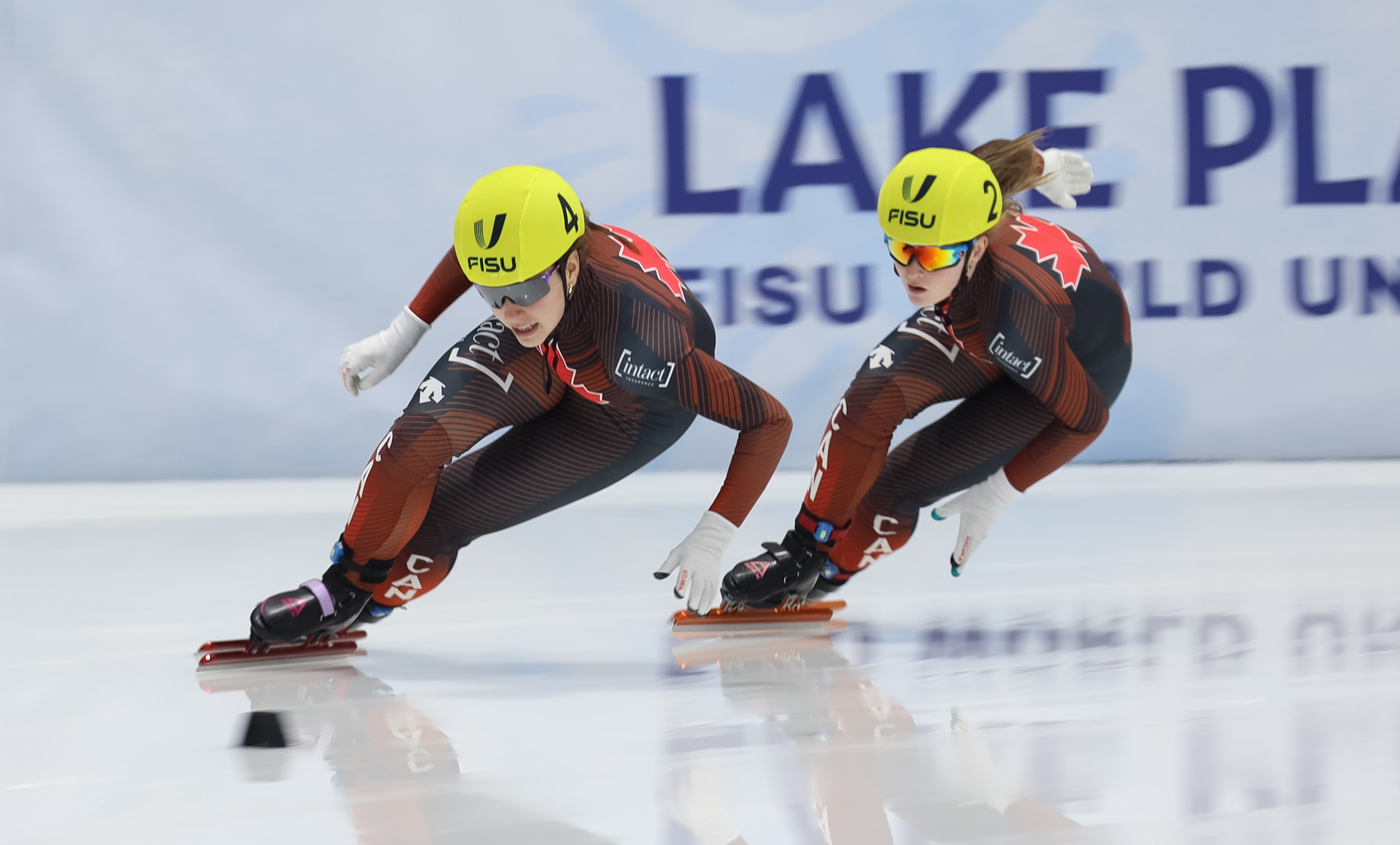 On the second day of short track competition, Canada had six skaters entered in the 500m – three men and three women.

The two Canadian teams also qualified for the A finals of the women's (3000m) and men's (5000m) relays. The women finished second in their semifinal, behind the United States and just ahead of Kazakhstan. The men's relay qualified despite a fall caused by a Chinese skater. After review by the officials, the Chinese were disqualified, thus propelling Canada to the A final.

Finally, the mixed relay raced in the B final. Once again involved in a fall, the Canadians finished in third place, but since three of the four countries participating in the A final were disqualified, Canada found themselves fourth in the final rankings.

Short track competition wraps up Saturday afternoon with the 1,000 meters as well as the women's and men's relay finals.

It was the last day of competition for the women at Whiteface Mountain, with the presentation of the two slalom runs.

On Saturday, it will be the men's turn to complete their FISU Games, with the presentation of the slalom. 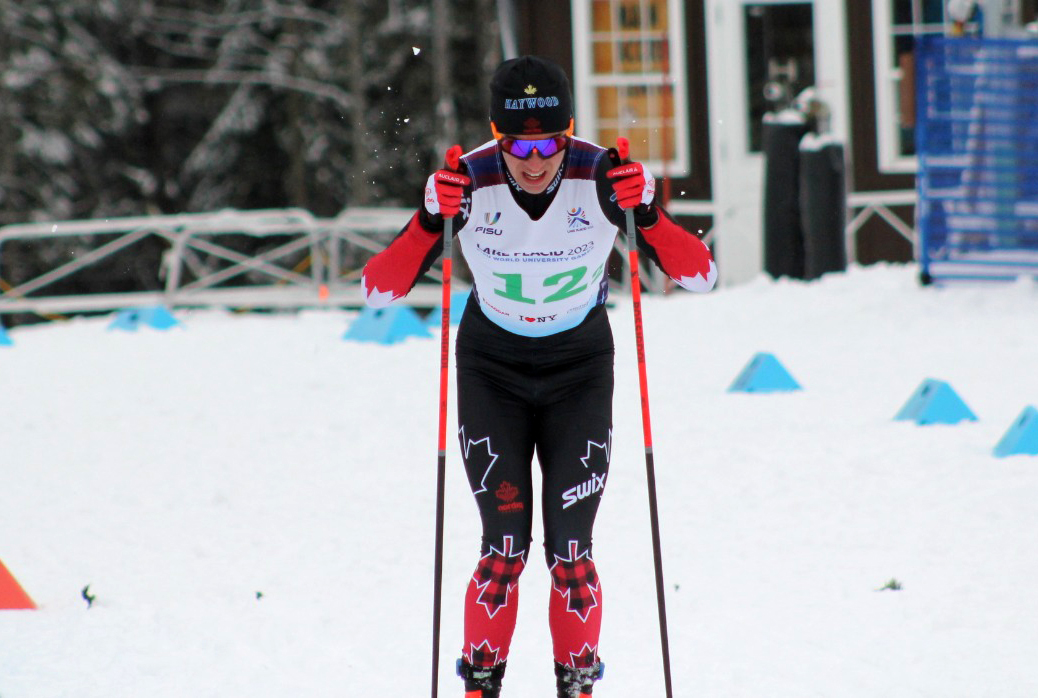 Lots of snow overnight in Lake Placid made for interesting conditions Friday morning at Mount van Hoevenberg for the women’s and men’s relays.

The women raced 5km each; Natalie Thain (Calgary) skied the classic leg for the Canadians and Emmanuelle Simard (Laval) and Bronwyn Williams (Carleton) each did a leg of free.

The men secured the 9th position with a time of 1:22:23.9. Robin Mason (Calgary) started off with three laps of classic. Antoine Nicol (Cégep de Saint-Jérôme) followed up with another three laps of classic. Alex Maycock (Nipissing), one of Canada’s flag bearers at the opening ceremony, took on the first leg of free, pulling the Canadians from 12th place to ninth. Aidan Kirkham (Ottawa) was the anchor skier, holding onto the ninth spot for his teammates.

The results of the FISU Winter Games 2023 are available here. Catch all the action on TSN.ca or the TSN app.