At the U SPORTS Swimming Championships this weekend in Sherbrooke, Que., the Montreal Carabins will be looking to build on their RSEQ title from two weeks ago. They will have two Olympic medalists, Katerine Savard and Sandrine Mainville in their corner helping them fight for a national title.

Savard and Mainville helped kick-start what has been a great run for Canadian women's swimming the last six months, dating back to their appearance in Rio at the 2016 Olympic Games and the pair will be bringing that momentum to Sherbrooke.

"I am really happy to be part of this," said Savard, a pre-school and primary education major at the University of Montreal. "What we did this summer, we have to use (it) to get better in the next few years."

For Savard, the push for Rio didn't start the way she was hoping. She missed making the team in her main event, the 100-metre butterfly. The native of Pont-Rouge, Que., was able to refocus and make the team in the 200-metre freestyle, finishing 15th at the Games and was a member of the bronze medal-winning 4x200-metre freestyle relay.

"I trained freestyle more and got better and that made me more confident. That's why I was more confident at the Olympics," Savard said. "This year I know I can be good in both, so I can maybe make the (national) team in both butterfly and freestyle."

Since Rio, Savard has rebounded in the butterfly. She won multiple medals in the 50, 100, and 200-metre races at World Cup events in Tokyo, Hong Kong, and Singapore in October, and set a new Canadian record in the 50 metres at the world short course championships in Windsor, Ont., in December. 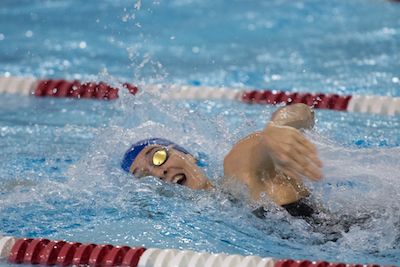 Despite this success, the increasingly fast speed of Canada's women meant Mainville knew she had her work cut out for her to get a spot in Rio.

"In September of 2015, I was like 'Wow those girls swam really fast at junior worlds. (National team member) Taylor Ruck swam 53.8 (seconds in the 100 freestyle) and that was the time I had swam that summer,'" said the law major. "I was like 'Wow, she's new, she's fast.' I think that helped me during the year to step up my game."

When it came time to compete on the first night of the Olympic swim meet, with her wealth of international experience behind her, Mainville was ready.

Savard and Mainville reduced their studies to focus on the push to Rio. Savard took just two classes last year, but is back to a full course load. Her international competition schedule, school, and training have kept the 23-year-old busy.

"I think I should be proud that I can do both," Savard said. "I have six or seven classes per semester, (and) it's really hard. It has helped me to focus and get better and it is really important for me to keep at school and keep doing well."

Mainville spent her pre-Olympic training in Toronto in preparation for Rio. After the Games, she wanted a change of scenery, to keep her swim career fresh.

"Going back to school was, yes, a challenge, but it gives me a rhythm to just not think about swimming," Mainville said. "It helps me get up in the morning because I know I have things to do. So yes, it's hard but I don't feel like it's a burden on me to swim fast."

The RSEQ Championships were the first university meet for Mainville and Savard in some time, but both are decorated athletes in varsity swimming. Savard was named the 2015 U SPORTS Women's Swimming Rookie of the Year, while Mainville won the Sprinter's Cup at the 2014 national championship.

The conference meet two weeks ago reminded both swimmers how unique the team-centric style of U SPORTS swimming is. While their international experiences have been valuable, both agreed there is something special about swimming as part of a team.

"(In Sherbrooke), I will swim the 400 freestyle, which I am not really used to doing, but I am doing it for the team and everything," said Savard. "I am excited to do it for the team."

"There are so many people in a small space and they cheer so much because it is all about the team," added Mainville. "I feel this motivation to swim fast because you realise you don't swim for yourself – you swim for the team."

Mainville and Savard are happy to share their experiences with their fellow Montreal teammates, and helping make the group as successful as possible. They know their teammates can benefit from seeing how they prepare and handle themselves at a big meet. However, both stress that they are just another member of the Carabins.

Off the bench and into the booth: How basketball has shaped Jaime Hills’ career