Student-journalists Lucy Fox and Declan Riley were recognized by U SPORTS and The Globe and Mail for their dedication to Canadian university sport and exceptional work over the course of the 2017-18 season.

Both student-journalists are part of the U SPORTS Correspondent Program, which launched during the 2016-17 campaign. The Correspondent Program aims to give student-journalists from across the country the opportunity to write a variety of human interest stories and profiles on U SPORTS student-athletes and programs, promote university sports in Canada, as well as build their portfolio - a true “by students, for students” initiative.

At the end of each season, U SPORTS awards the Story of the Year to the correspondent with the best article that is engaging, and has a strong storytelling narrative, while also recognizing one outstanding writer with the Correspondent of the Year award. For the 2017-18 season, The Globe and Mail – U SPORTS’ official media partner – expanded their partnership with the national office by serving as the presenting sponsoring of the awards, supporting grassroots journalism and celebrating student sports journalism in Canada

Fox, a Bachelor of Media Studies student at the University of British Columbia (UBC) and sports editor of the campus newspaper The Ubyssey, took home the U SPORTS Story of the Year Presented by The Globe and Mail for 2018. Her piece on UBC’s Abbey MacLellan – a member of Thunderbird women’s field hockey team who returned to action in September 2017 after a shattering facial injury – earned her the honour as part of a U SPORTS social media campaign. 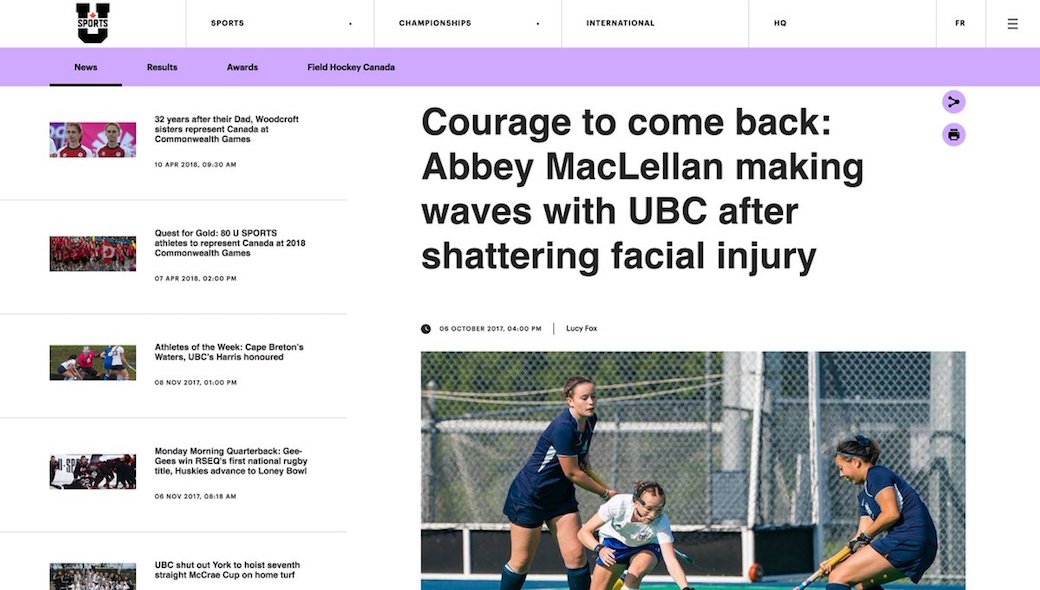 The campaign began on July 5 and for the next 48 hours, U SPORTS fans were encouraged to retweet their favourite story, with the Story of the Year award presented to the writer whose story had the most shares. At the conclusion of the campaign, over 300 votes were cast and 100,000 impressions were tallied amongst the top four stories, chosen by the 15 U SPORTS Correspondents.

Meanwhile, Declan Riley was selected as the 2017-18 recipient of the Correspondent of the Year Award Presented by The Globe and Mail. The second-year journalism student at MacEwan University was chosen for the honour based on the overall quantity and quality of his work, the diversity of his written portfolio, his punctuality and ability to find and pitch interesting stories, as determined by the U SPORTS Communications Department. Riley’s piece on Jennifer Oakes, a volleyball player from the University of British Columbia Okanagan Heat and Rio 2016 Paralympian was also one of the four stories up for the U SPORTS Story of the Year Presented by The Globe and Mail, highlighting his strong storytelling skills. 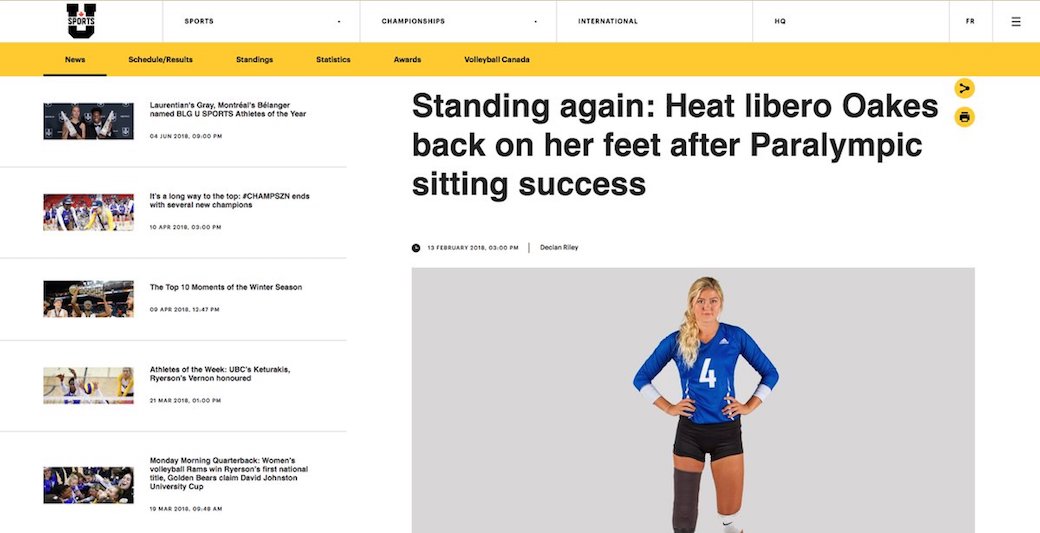 U SPORTS and The Globe and Mail would like to congratulate both winners, as well as all members of U SPORTS Correspondent Program during the 2017-2018 season.

To see the full roster of U SPORTS Correspondents and read their stories click here!

If you are an aspiring student-journalist with a passion for U SPORTS and would like to join the U SPORTS Correspondent Program for the 2018-19 season, click here to download the application.

Where are they now: When dreams come true - Ryan Sclater’s year in Germany