U SPORTS held its 42nd Conference and Annual Meeting from June 3-6 at the Hilton Markham / Toronto Suites and Conference Centre.

During Thursday’s Annual Meeting, U SPORTS thanked three outgoing members of the Board of Directors in Beth Ali (Toronto), Dr. Kent MacDonald (StFX) and Dr. Pierre Zundel (Laurentian), and elected their replacements. The new members are University of Prince Edward Island President and Vice-Chancellor Dr. Alaa Abd-El-Aziz, Carleton University President and Vice-Chancellor Dr. Benoit-Antoine Bacon and Western University Director of Sport and Recreation Services Christine Stapleton. Full biographies of each new Board Member are available below. 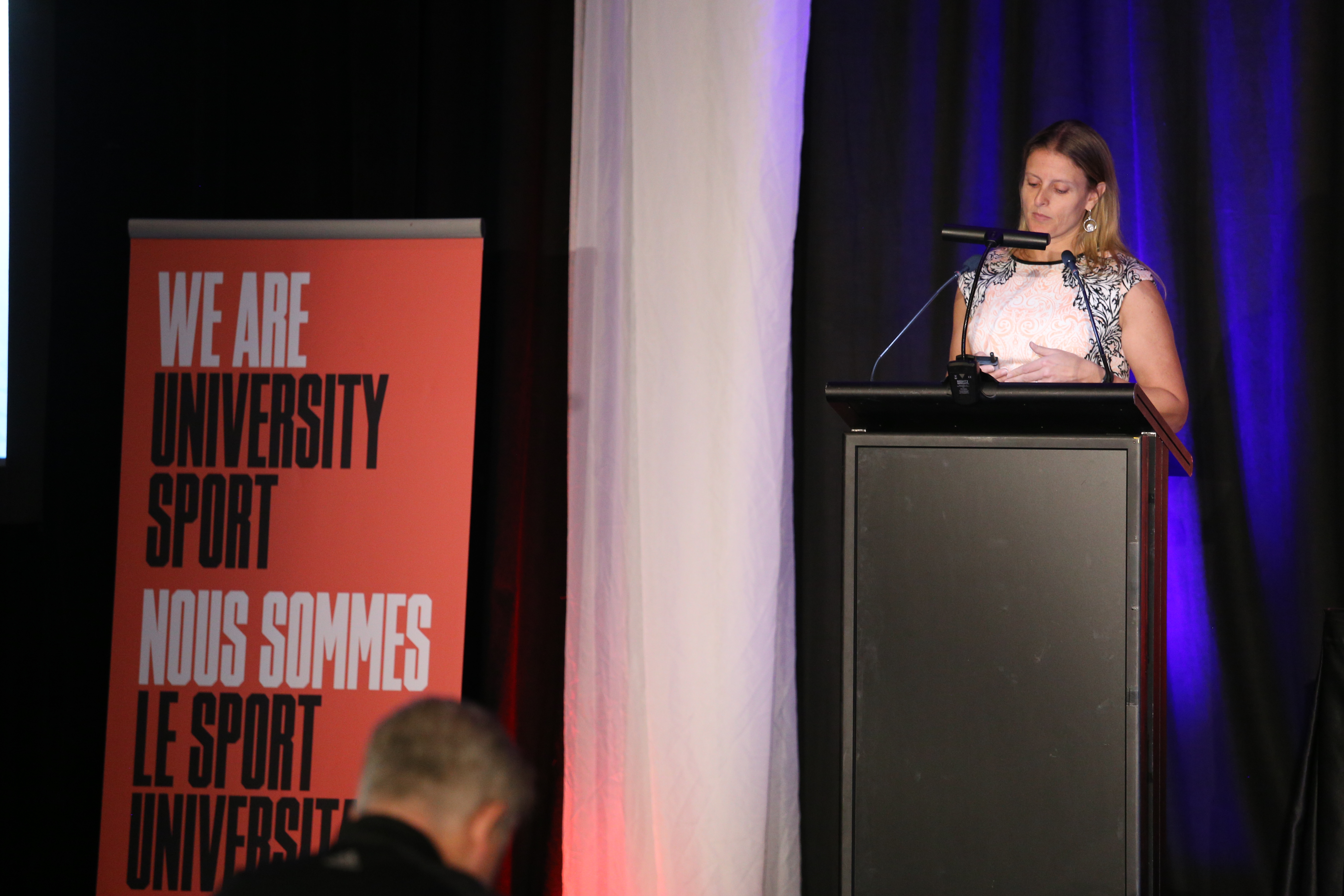 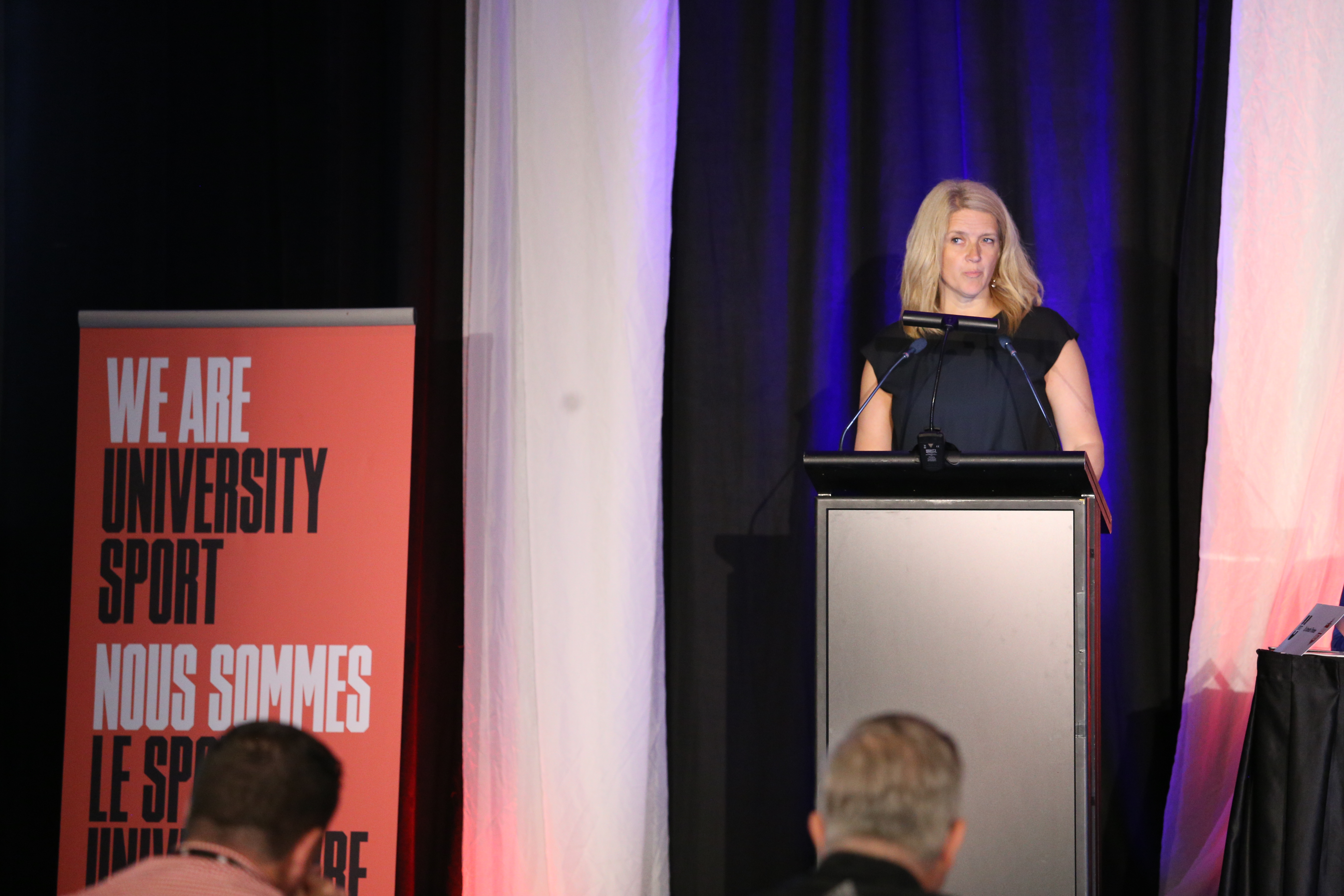 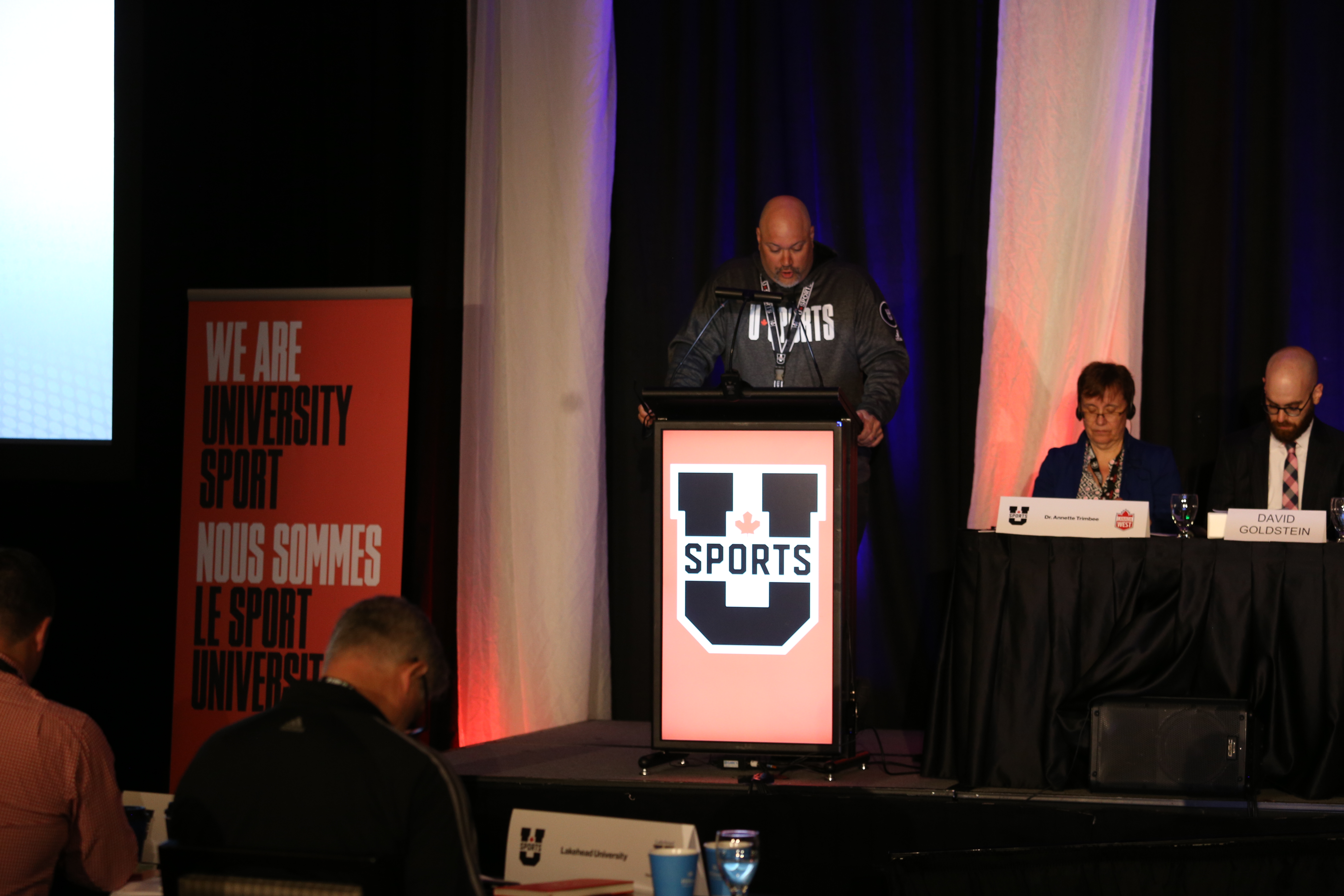 On top of this, the membership heard from pair of keynote speakers in Dr. Greg Wells and Alberto Ruiz Luca de Tena, followed by a presentation from U SPORTS President and CEO Graham Brown discussing the national office’s broadcast strategy and The Future of Televised Canadian University Sports. 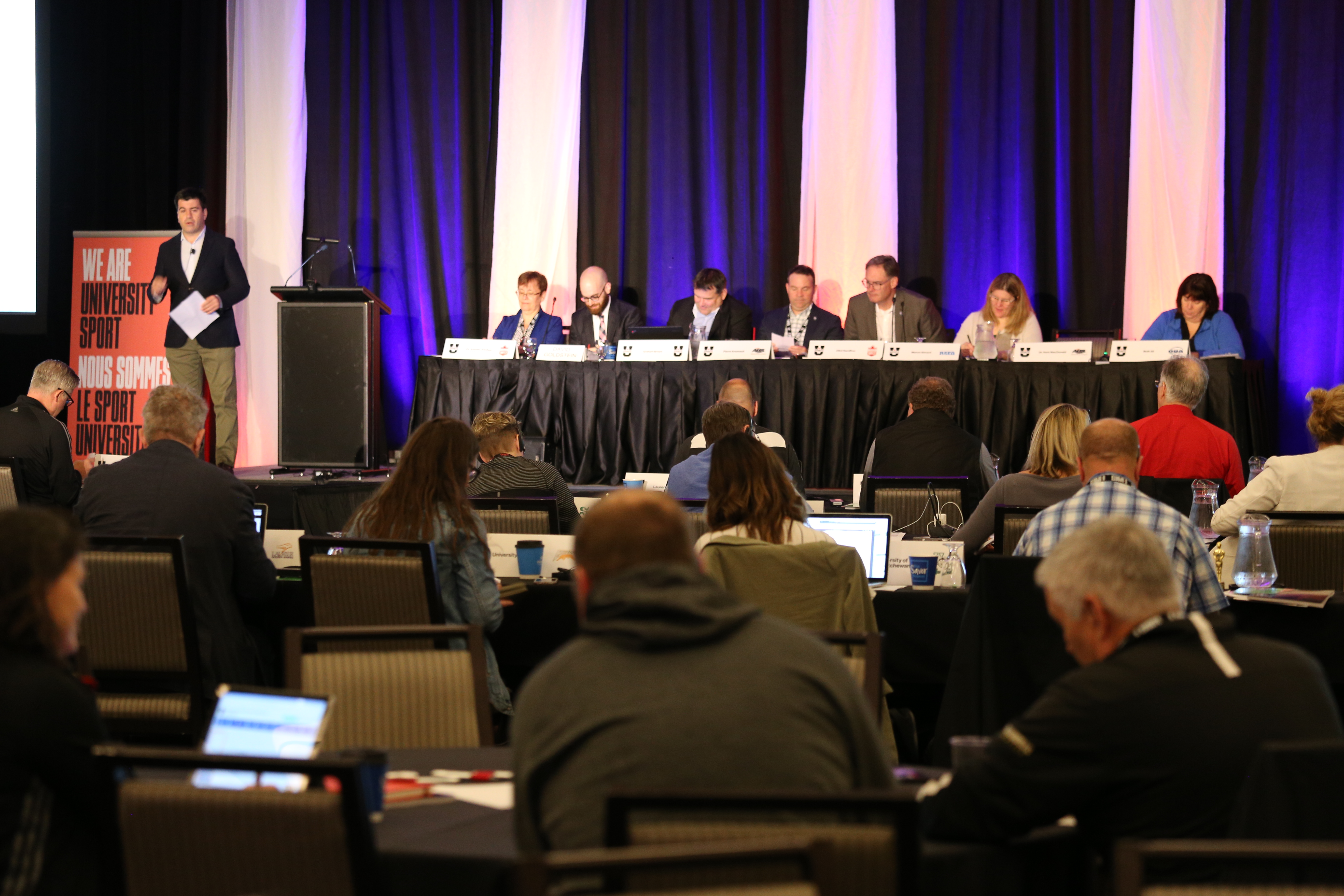 Following the Annual Meeting, the new Board of Directors assembled. At the meeting, Winnipeg’s Dr. Annette Trimbee was appointed as Chair, Montreal’s Manon Simard as secretary and Mount Allison’s Pierre Arsenault as the newly-created officer position of Vice-Chair. The Vice-Chair will provide ongoing support to the Chair, act as a primary liaison between the members and the Chief Executive Officer, serve as a member of the Human Resources Committee and perform all other duties as may from time to time be delegated by the Board of Directors.

In addition, the Board discussed the following items:

The 2020 U SPORTS Conference and Annual Meeting is slated for June 1-4 in Halifax.

U SPORTS BOARD OF DIRECTOR ELECTEES 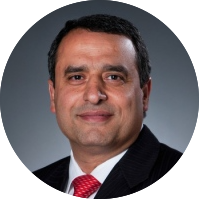 Dr. Abd-El-Aziz assumed his responsibilities as the sixth president and vice-chancellor of the University of Prince Edward Island on July 1, 2011. Prior to joining UPEI, he was provost of the University of British Columbia's Okanagan campus where he provided leadership and in the areas of planning, policy development, and resource management. His responsibilities also encompassed the academic and research mandates. Throughout his administrative career, Dr. Abd-El-Aziz has remained actively involved in chemistry, making significant contributions to research and teaching in his field of inorganic and organometallic polymers and materials. He has authored over 150 peer-reviewed articles in prestigious academic journals, one book, and ten book chapters; and edited 16 books. He is the editor of the Journal of Inorganic and Organometallic Polymers and Materials and is on the editorial board of six other journals related to his field of expertise. 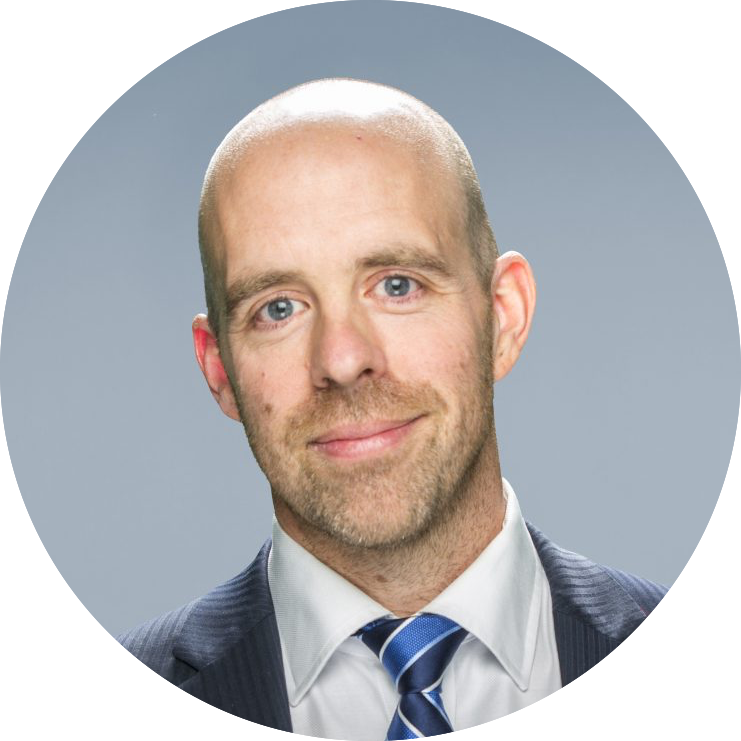 Dr. Bacon started his five-year mandate as President of Carleton University on July 1, 2018. He previous served as Provost and Vice-Principal at Queen’s University, Provost and Vice-President (Academic Affairs) at Concordia University, as well various leadership roles at Bishop’s University, including Dean of Arts and Science, Associate Vice-Principal for Research, chair of the psychology department and chief negotiator for the association of professor. He has been honoured with an award as Concordia University’s Sustainability Champion and is a three-time recipient of the Bishop’s Merit Award for exceptional performance in teaching and research. His research in the field of cognitive neuroscience focuses on the links between brain activity and perception in the visual and auditory systems, as well as on multisensory integration. He remains associated with the Montreal-based Neuropsychology and Cognition Research Center (CERNEC), which is funded by the Fonds de recherche du Québec. 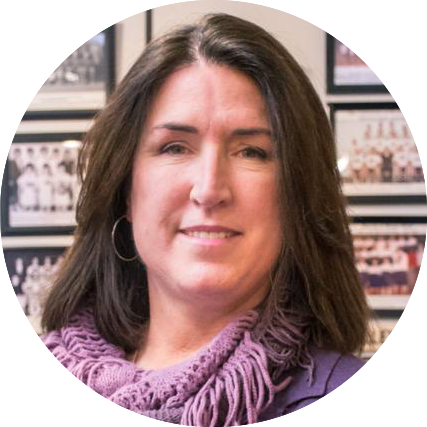 Stapleton began as Western University's new Director of Sport and Recreation Services on July 3, 2017. Stapleton came to Western with more than 30 years of experience in university sports, serving as an administrator, coach, and competing as a student-athlete. From 2015-17, she served as the Director of Athletics at the University of Calgary, leading all elements of strategic planning and program development, as well as the day-to-day operations of the Dinos program. Prior to this, Stapleton served as Associate Director – Athletics, at the University of Waterloo. As a coach, Stapleton had a successful run with the University of Regina's women's basketball program from 1993-2002, winning three conference coach of the year awards, CIAU Coach of the Year in 1996, and a 3M Canadian High Performance Coach of the Year in 2001. Stapleton also served Canada Basketball in various capacities from 1998 to 2009, including as a national team head coach and as National Development Coach.