A fourth-quarter rally fell short for the Canadian women in their opening game of the 2019 Summer Universiade in Italy as they dropped an 84-69 decision to China at Palacercola.

Trailing by 26 after the third quarter, Canada held China to just five points through the majority of the fourth as they slowly chipped away at the lead, bringing the score as close as nine points at 78-69 with less than three minutes to play. But that was as close as they would get, with the Chinese scoring the final six points of the contest to take a 15-point win in Group D.

“We had a really slow start,” said Canadian head coach Michèle Bélanger. “We had some great shots that just didn’t drop early in the game and then it was a little bit of a runaway train in the third quarter.

“I thought we had an outstanding fourth quarter. We narrowed it down and the girls felt a little more relaxed. We started to run and keep the pace up. We had some really good moments. I think that it was a great team to play in our first game. It’s too bad that the score doesn’t dictate how we finished but overall I was pleased with the effort.”

The Canadians scored on their first possession and controlled the pace early on. But they ran into foul trouble, and midway through the opening quarter the offence dried up as China took the initiative and led by as many as nine. A late Canadian run cut the deficit, including a spin-and-shoot triple from the corner as the shot clock wound down by Calgary’s Erin McIntosh, but China took a 28-22 lead into the second quarter.

China held Canada to just 11 points in the second quarter, with Canada unable to score until more than four minutes into the frame as the Chinese took a 52-33 lead into half time. Out of the half, China scored the first nine points in the third to extend the lead, sitting on top 73-47 heading into the final frame. 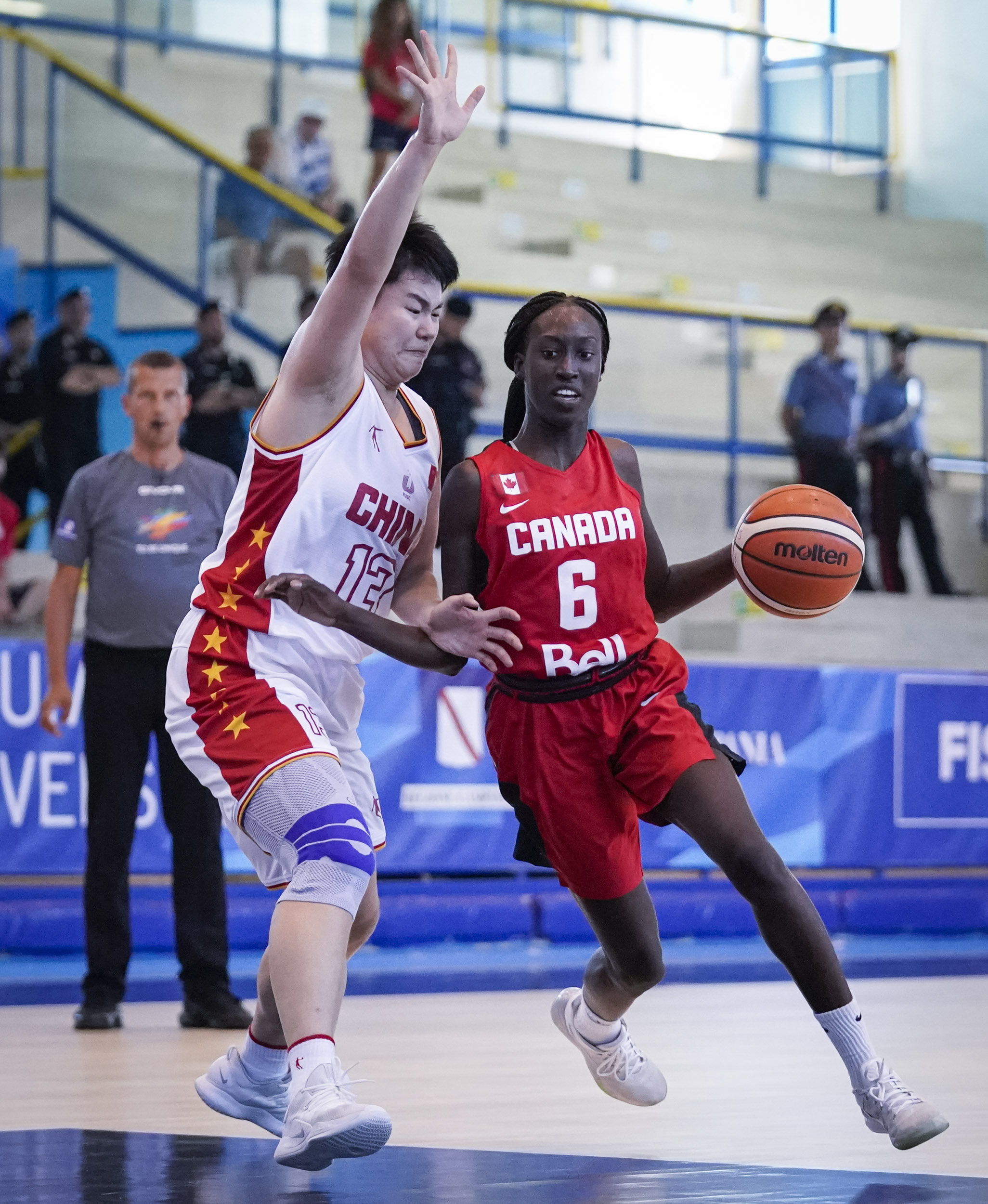 That set the stage for Canada’s big fourth-quarter effort led by Megan Ahlstrom, who scored nine of her 12 points in the final frame.

“We came out a little flat and they came out really fast,” said the Saskatchewan Huskies guard. “They’re a fast team and a really good shooting team. They can all shoot the three, which is hard to defend. We got better in the fourth quarter and we need to have that energy all game to be successful.

“It’s an awesome experience and a true honour. I have never played for Team Canada before so I was really nervous but super excited and I’m really honoured to be here.”

Reigning U SPORTS player of the year Sarah-Jane Marois of Laval led Canada offensively with 15 points, with Hannah Brown of Cape Breton joining Marois and Ahlstrom in double digits with 10. Canada won the rebounding battle with 37 against China’s 32, including 11 offensive boards – three of which came from Marois.

"I think we let them shoot too easily,” said Marois. “In the second half, we did a much better job to put pressure on them and that's why we managed to get back in the game. They had too many easy shots.

“In the second half, we did a much better job to put pressure on them and that's why we managed to get back in the game. They had too many easy shots."

"We are still confident, we think we can play with other teams. We came here to win, so we will work hard and we will go for a win." 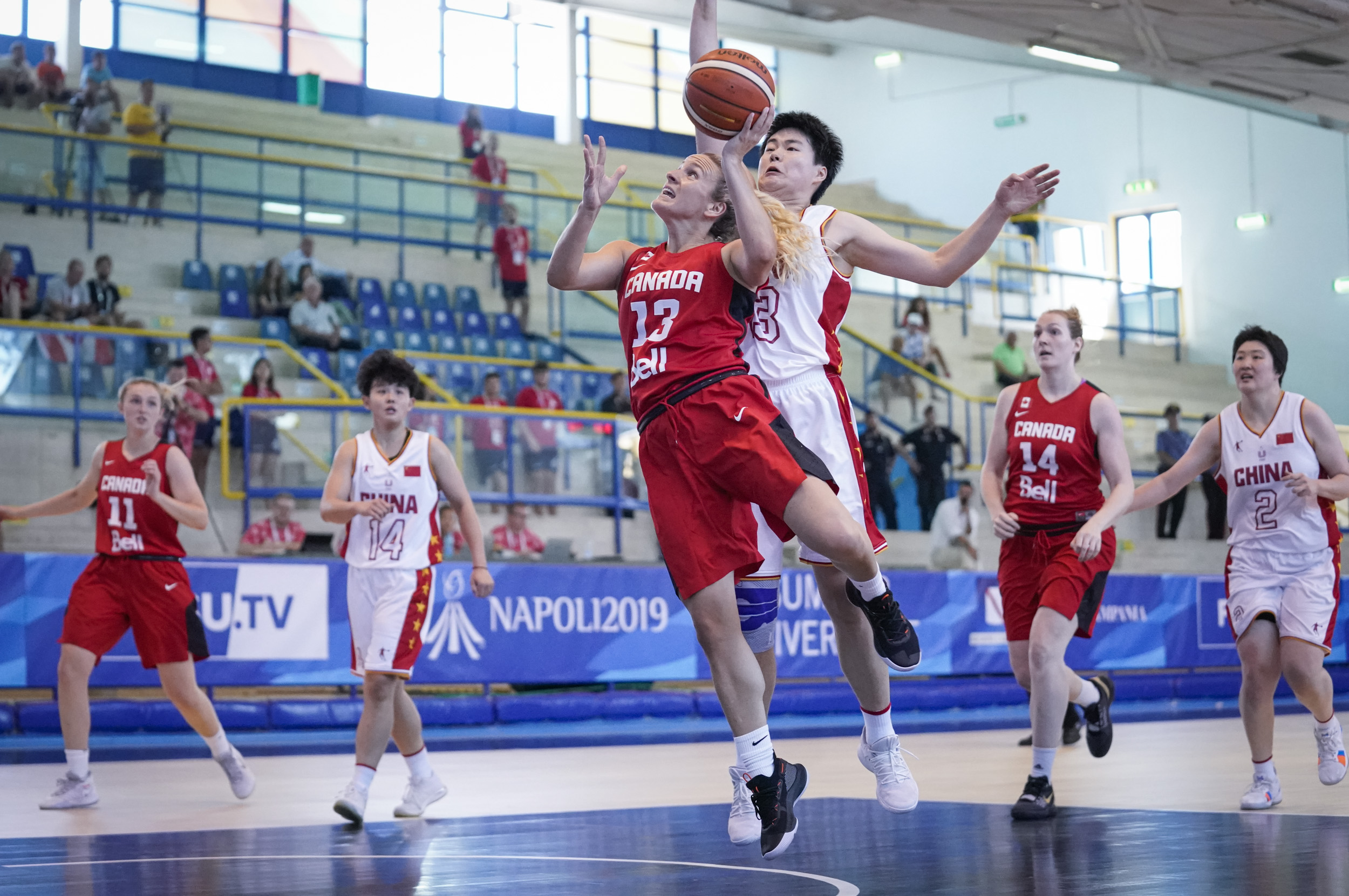 “We have to be a little bit more confident in our style of game,” Bélanger said. “We have to be able to find our scorers and try to get them early shots. We have to continually play with effort. The girls coming off the bench have to play with a little more energy and more effort. If we can get that done, good things are going to happen.”

Getting to know your U SPORTS athletics staff: Skye Angus, Guelph Gryphons