The StFX X-Women (6-2-0) begin the season as the team to beat in women’s hockey. 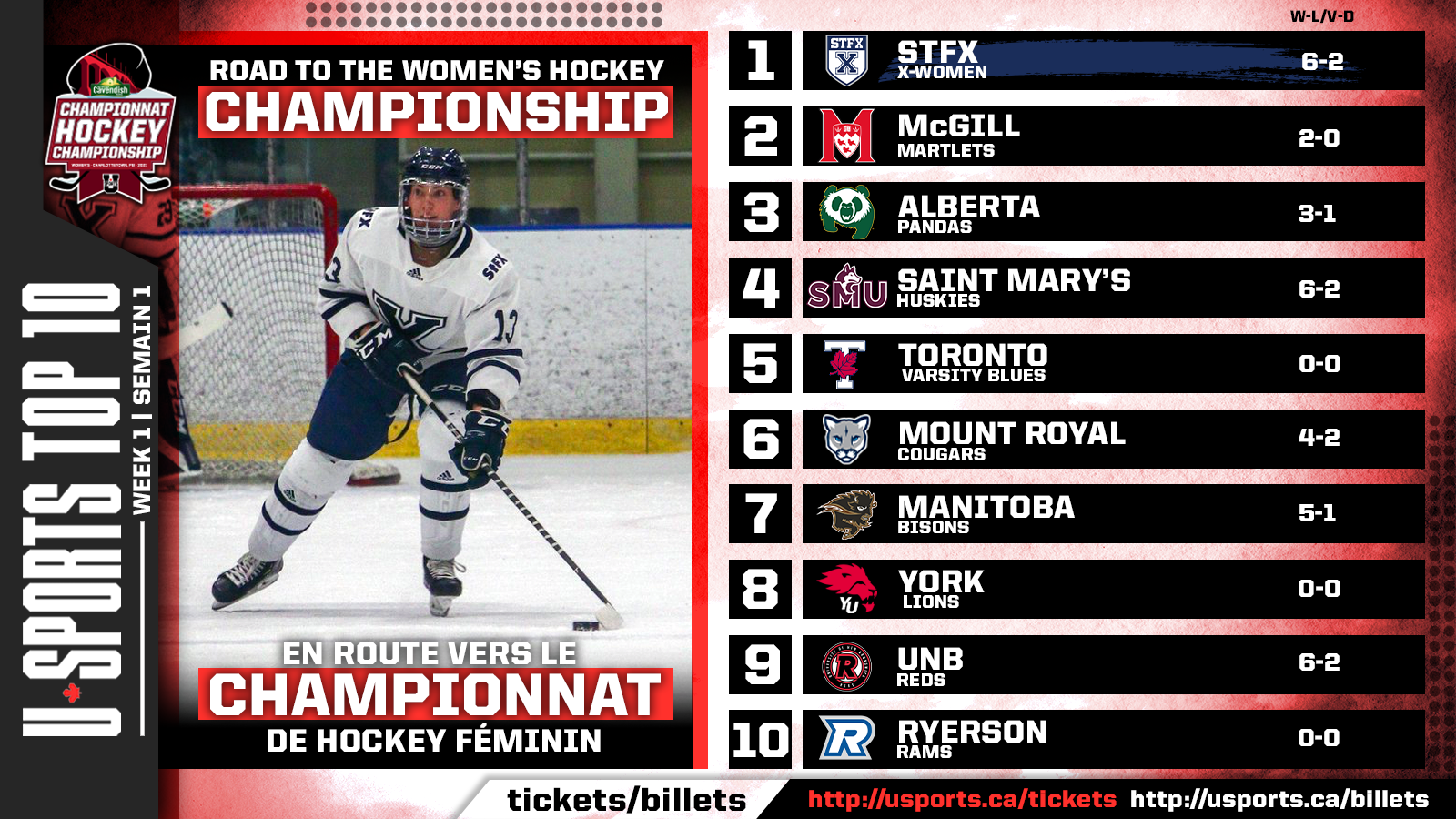 Lea MacLeod leads the X-Women in points with 12 assists, while teammates Maggy Burbidge and Emerson Elliott lead the team in goals with five apiece.

Through eight games, the X-Women have the most goals in the AUS with 39 while their 15 goals against is an AUS-low. Goaltender Amaya Giraudier has stood out between the pipes for the X-Women posting a 1.47 goals-against average and .949 save percentage through four games this season.

In men’s hockey, the UNB Reds (7-1-0) remain the top-ranked squad on the heels of their first regular-season loss to the No. 4 StFX X-Men (6-2-1). The X-Men snapped a seven-game win streak for the Reds, who have only allowed 12 goals through eight games this season. 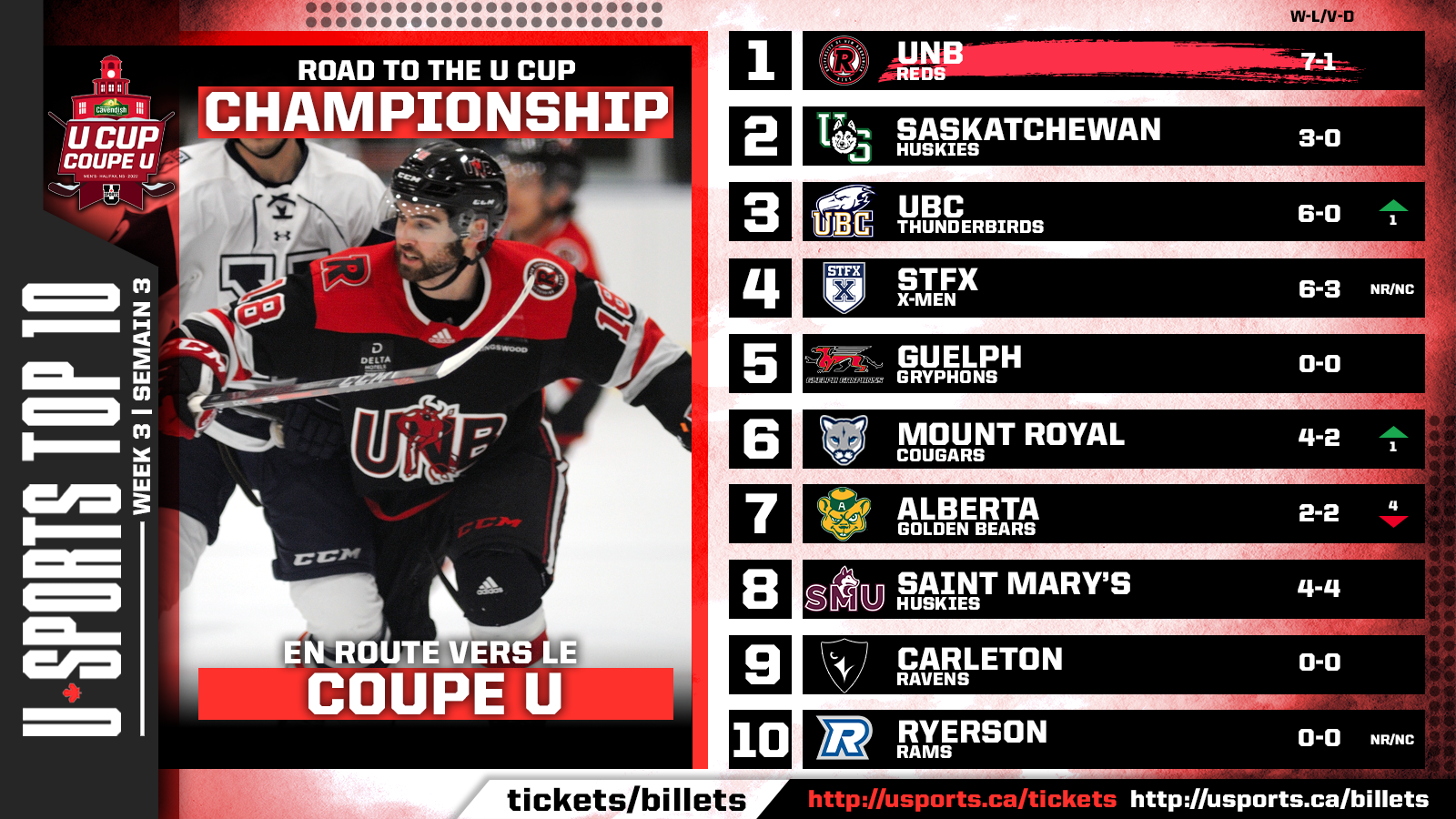 In football, the Montreal Carabins (7-1) remain atop the U SPORTS rankings closing out the RSEQ regular season with a 14-9 victory over the McGill Redbirds (1-7). The Carabins will host the Sherbrooke Vert et Or in an RSEQ semi-final matchup on Saturday. 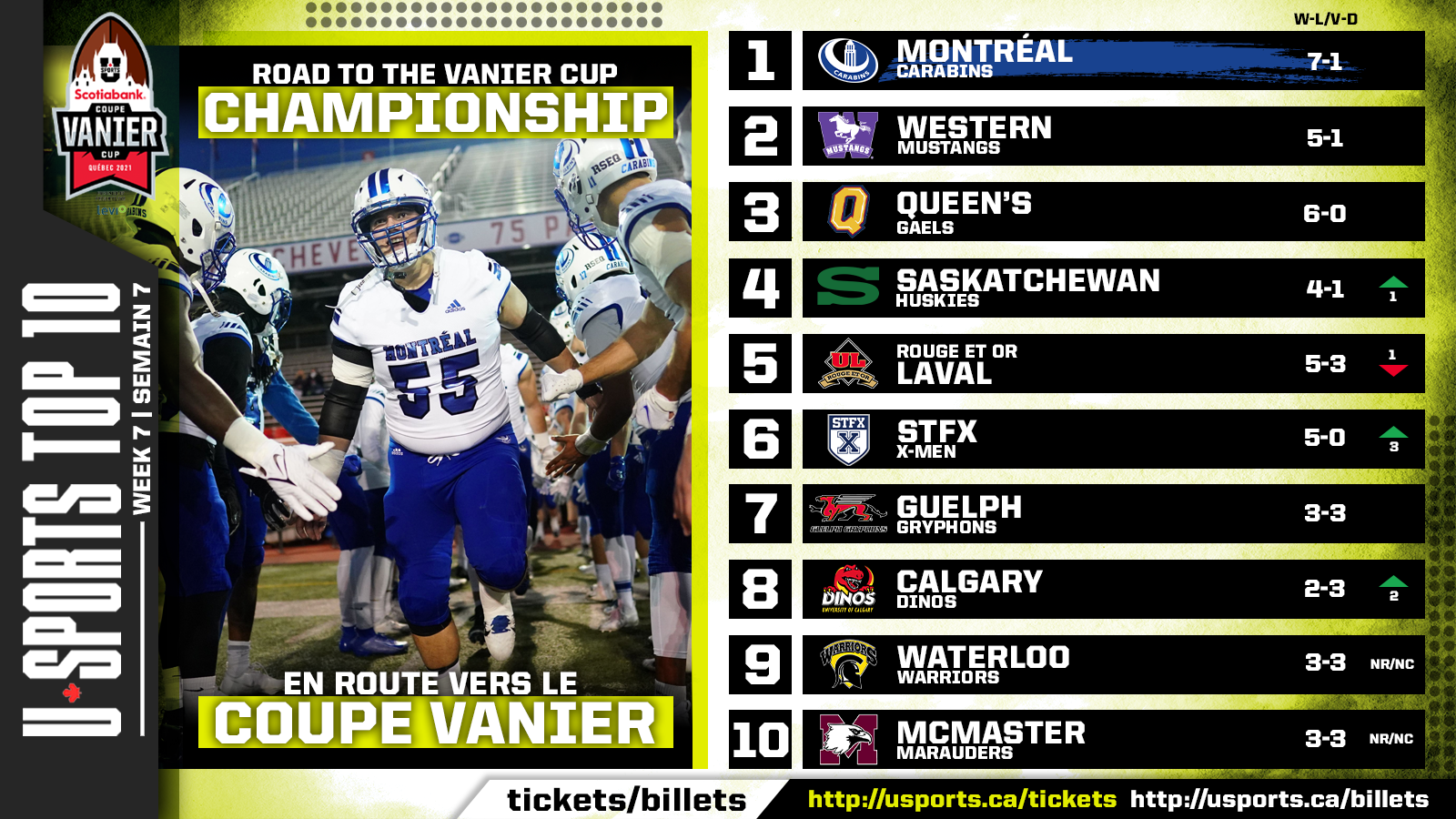 In women’s rugby, the UBC Thunderbirds (5-0, playoffs 2-0) have captured the No.1 ranking after a dominant victory over the No. 8 Victoria Vikes (3-2, 1-1 playoffs), in the Canada West championship.

The Thunderbirds clinched conference gold for the second straight year and will turn their attention to the U SPORTS Women’s Rugby Championship beginning Nov. 11, hosted by Queen’s. 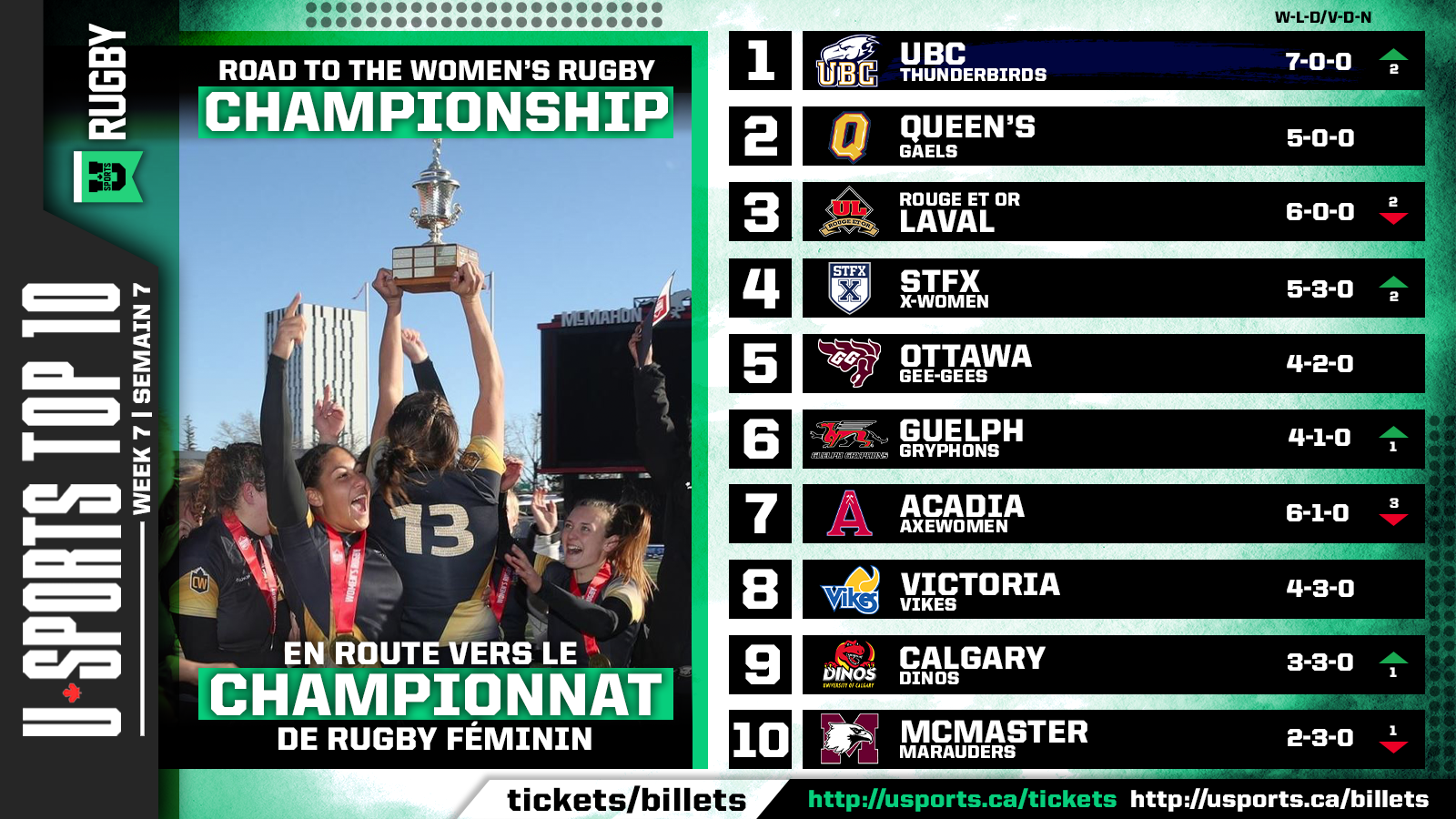 The Cape Breton Capers (8-1-3) moved up two spots to claim the top seed in men’s soccer, ending the AUS regular season on a four-game win streak. In their last match, the Capers downed the Dalhousie Tigers (4-5-3) 2-0 to earn their seventh clean sheet of the season. 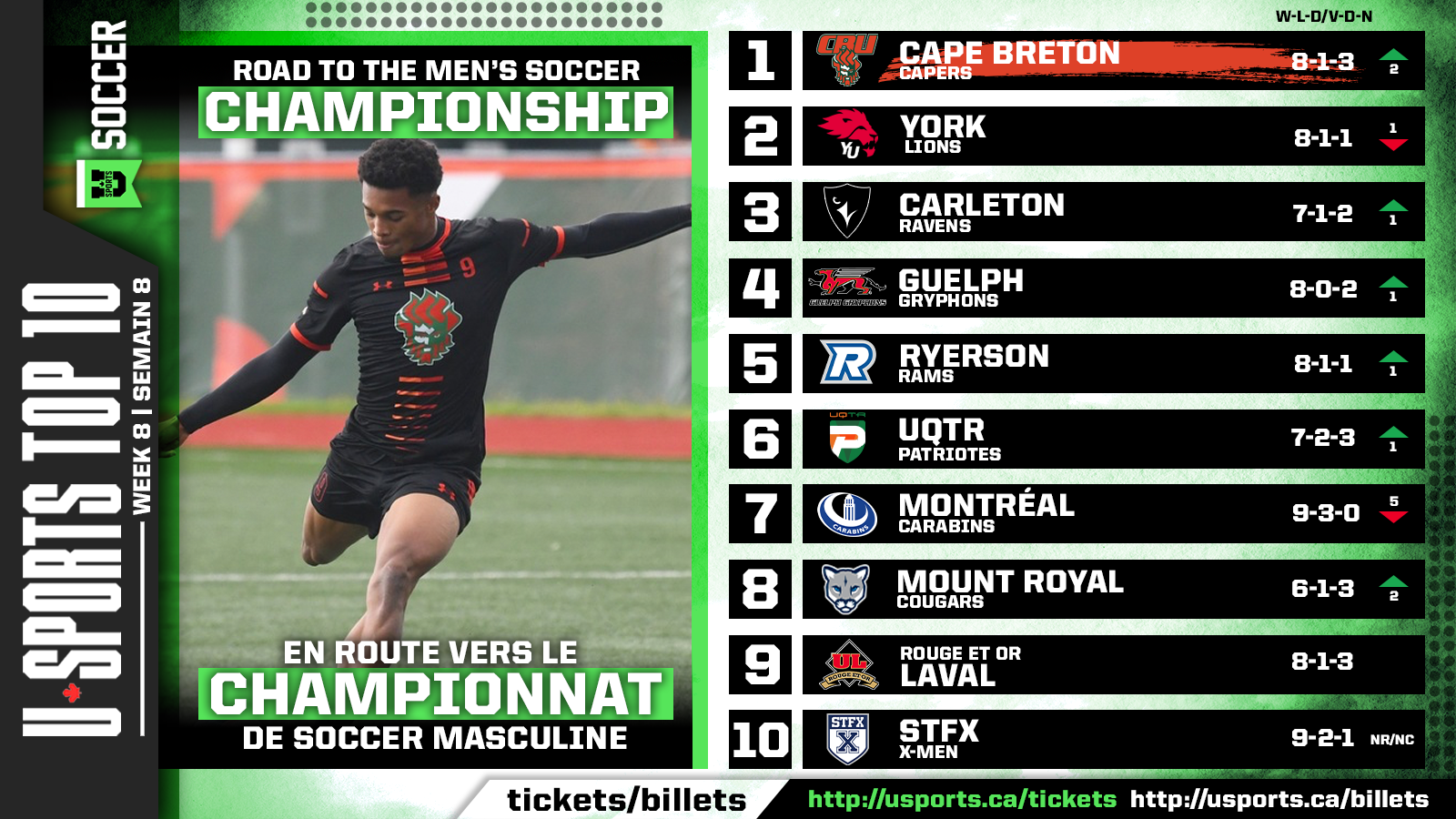 In women’s soccer, the Trinity Western Spartans (11-0-1, 1-0 playoffs) remain the top-ranked team after topping the Victoria Vikes (4-5-3, 0-1 playoffs) in the Canada West quarter final. The Spartans edged the Vikes 1-0, with a 75th-minute goal by Makenna Dieterich. 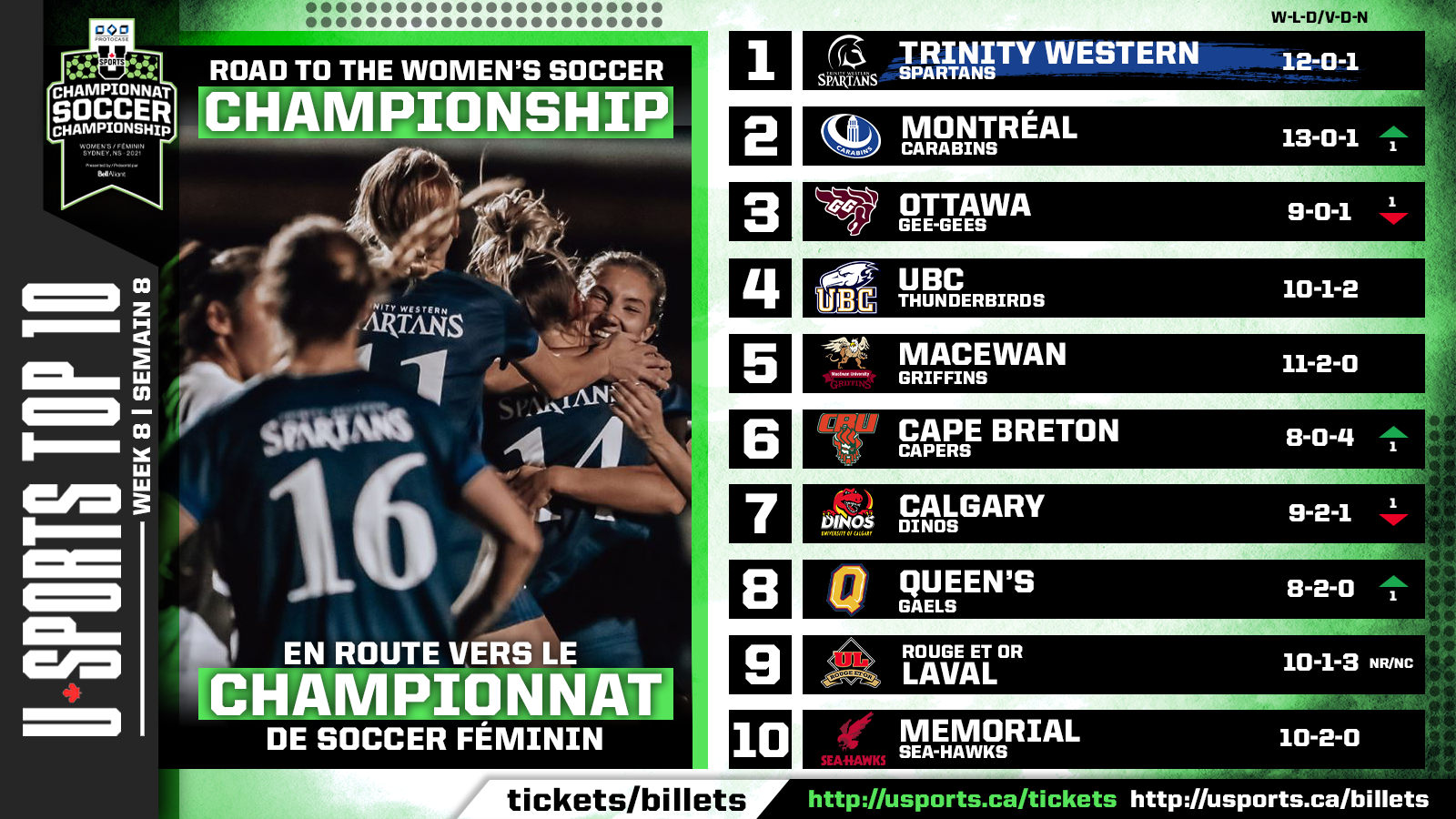 In men’s cross country rankings, the Laval Rouge et Or remain the top seed, with the No.2 Gryphons close behind. In the Quebec Provincial Championship, the Rouge et Or dominated, with seven athletes racing to a top 10 finish. 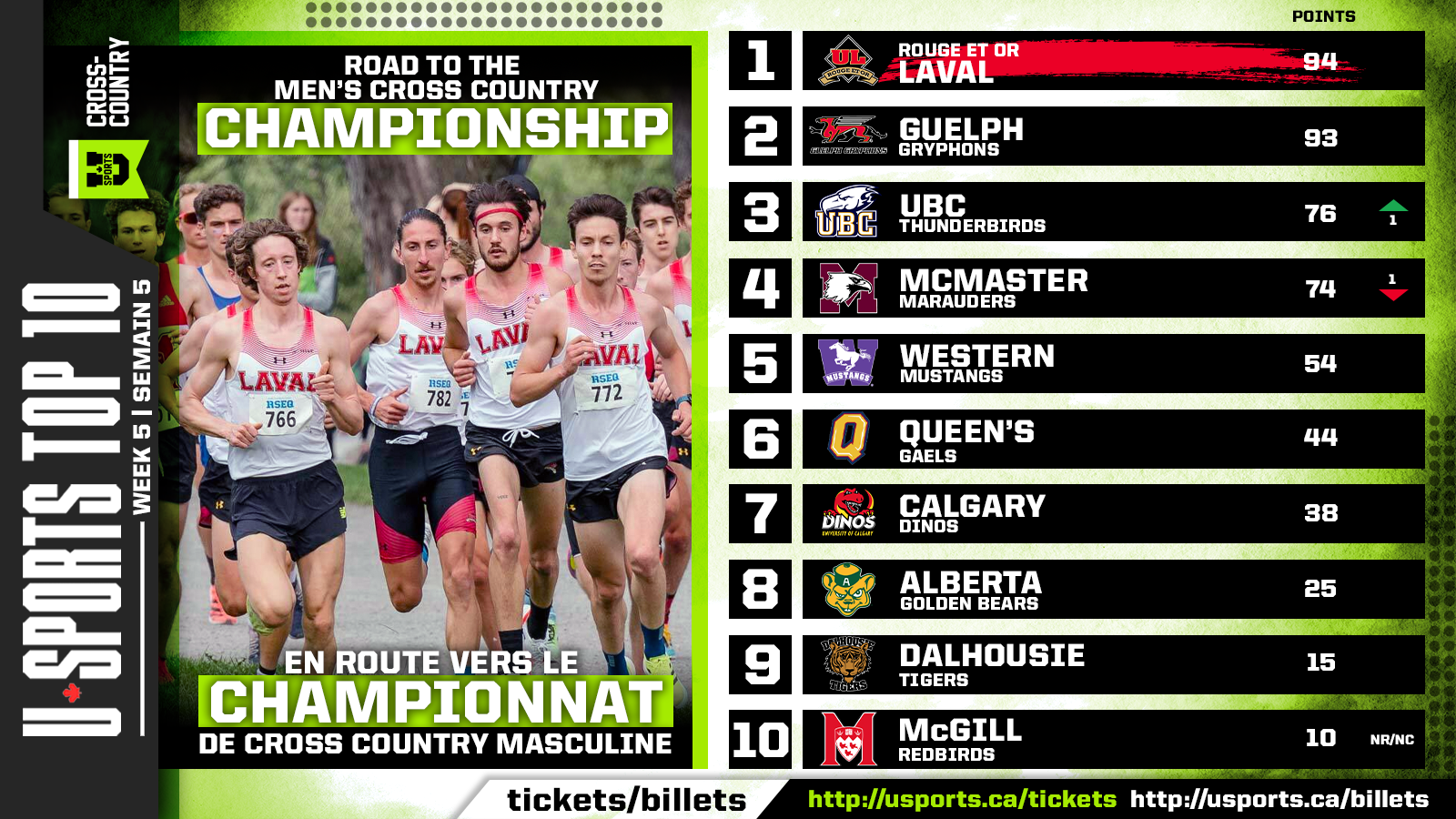 On the women’s side, the Guelph Gryphons remain the top cross country squad, and head into the OUA Championships in London as the favourite to take the team gold. 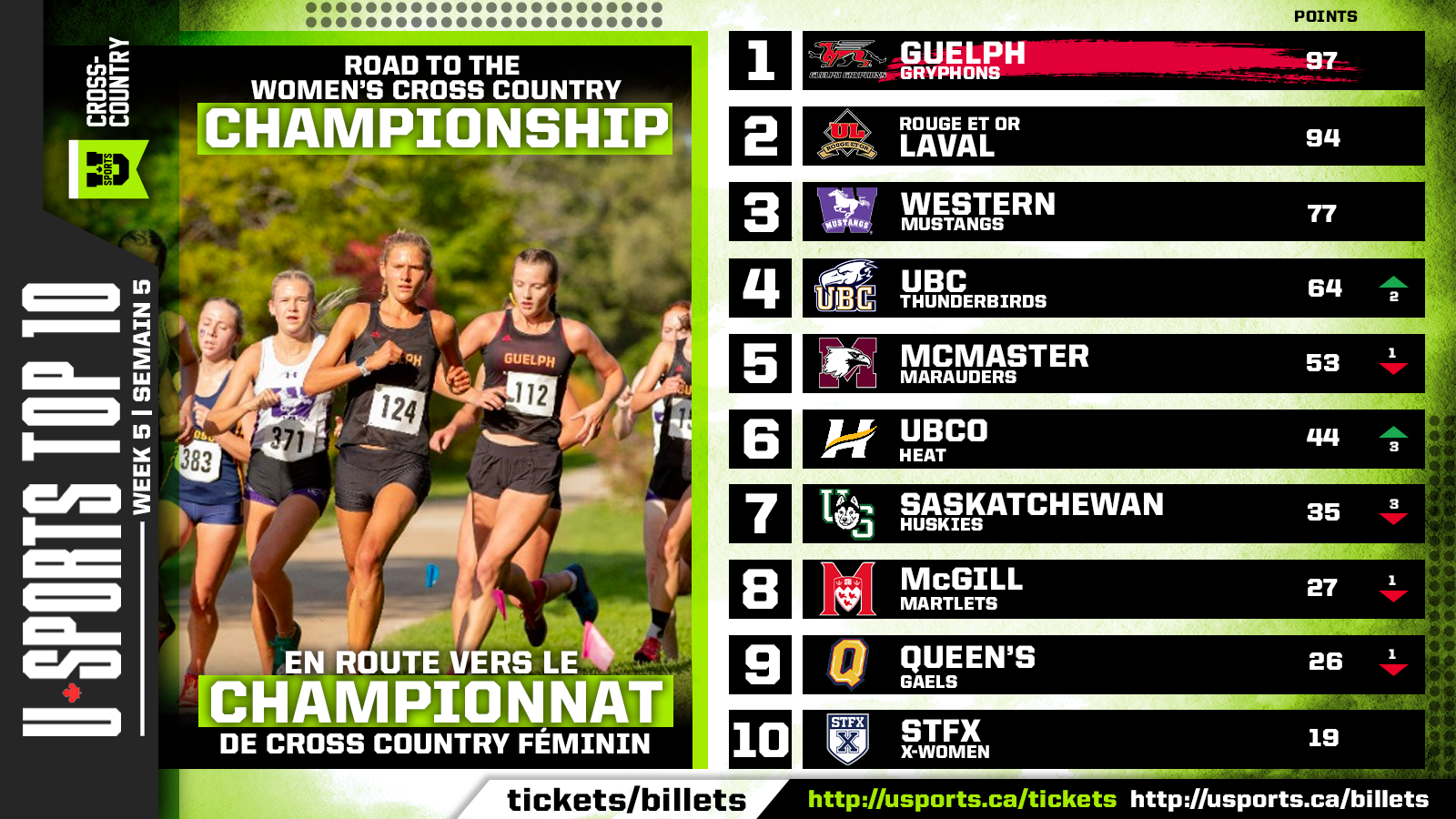 In women’s field hockey, the Victoria Vikes (7-0-1),  remain the top-ranked team heading into the Canada West championship against the No. 4 UBC Thunderbirds (4-3-1). 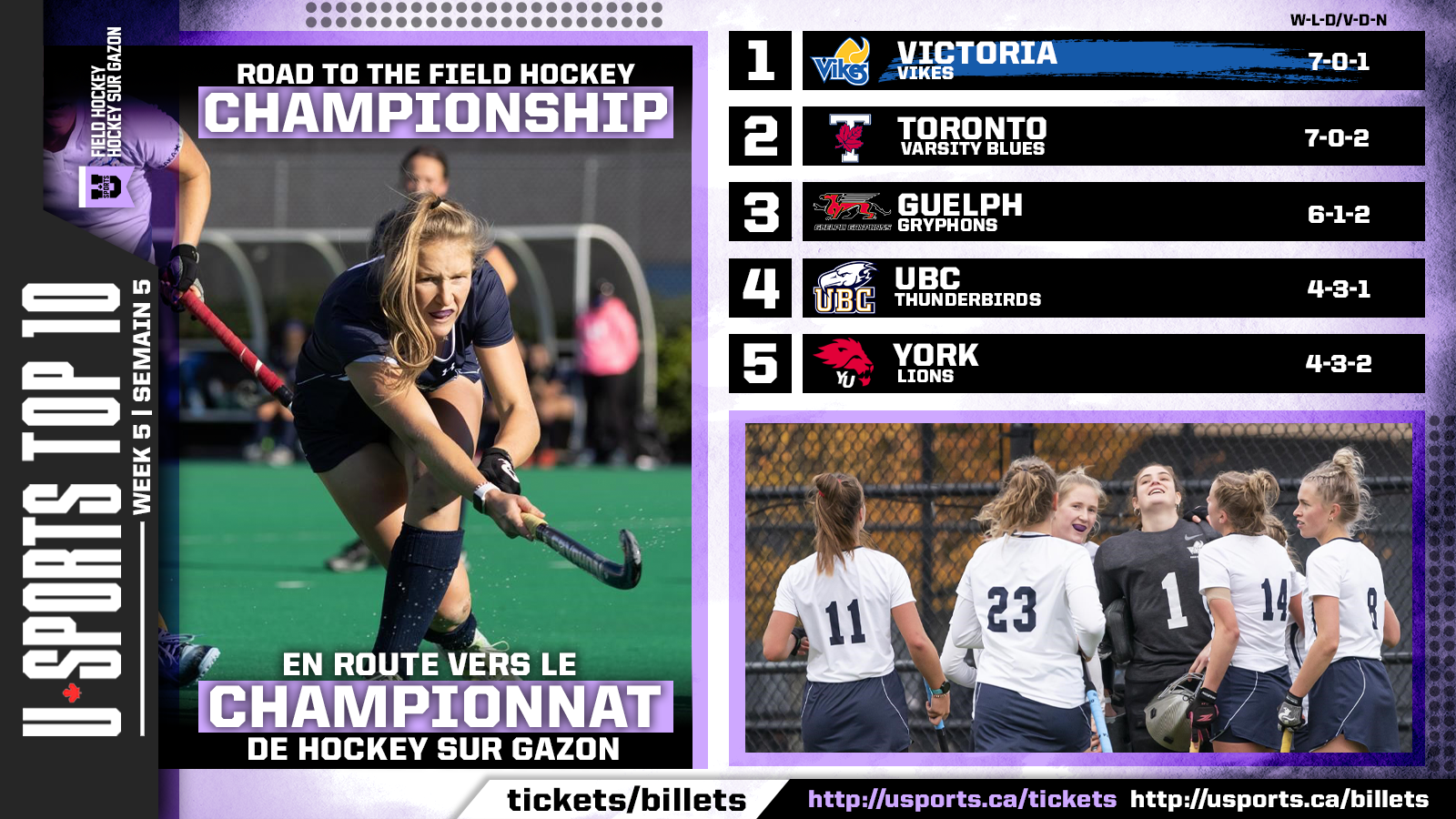