The defending women’s champion Alberta Pandas won twice on Day 1 of the 2019 U SPORTS / Curling Canada Curling Championships, in Fredericton.

Alberta’s Selena Sturmay rink edged the host UNB Reds 7-6 in the morning draw, before beating Queen’s 6-4 in the afternoon draw.

In the event’s opening draw, the Pandas scored three in the fifth end, then hung on to beat the host Reds.

“My team does really well when we just focus on getting ahold of the ice conditions early,” said Sturmay, back in Canada after competing at the 2019 FISU Winter Univerisade. “We weren’t too focused on the outcome of the game, just focused on the process.” 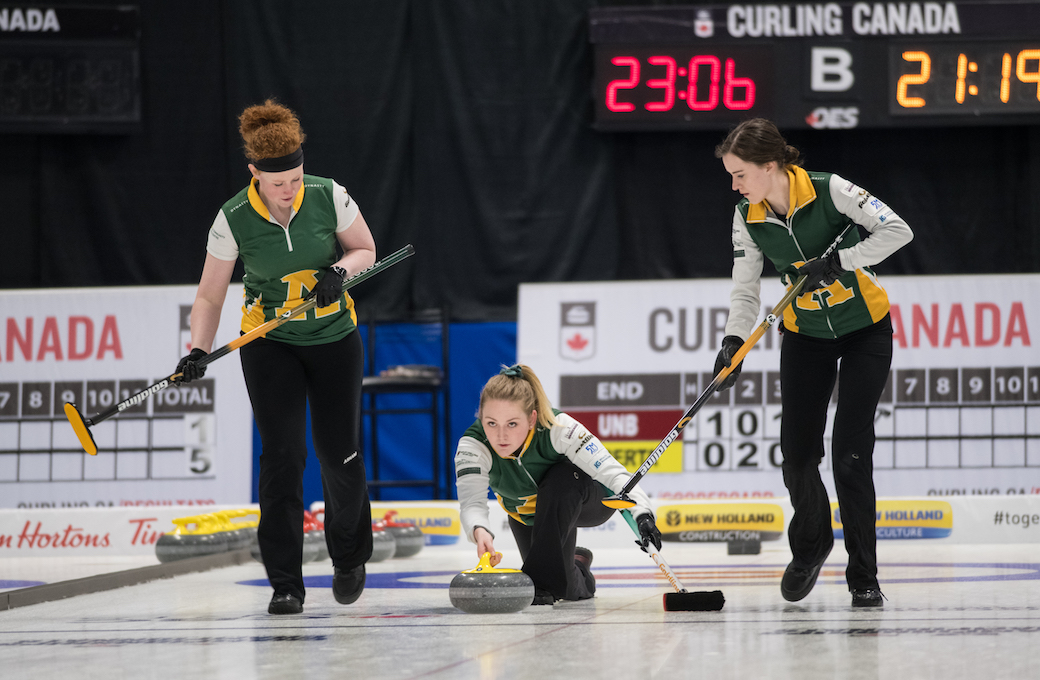 UNB had a chance to force an extra end, but missed on a difficult come around attempt, only scoring one in the final end when they needed a pair.

“I’m pleased we were able to keep it close and come super close to an extra end and a possible win, but it is what it is. I think we took a lot out of that game,” said Reds skip Justine Comeau.

In other first draw games, Brock downed Laurentian 8-3 in nine ends, Queen’s held off Mount Allison 7-4, and Dalhousie scored one in the 10th to beat Regina 6-5.

The men took to the Willie O’Ree Place ice for the early afternoon draw.

Carleton’s Cameron Goodkey scored three in the eighth end and three more in the ninth to score a 9-4 win over Alberta’s Karsten Sturmay.

“We’re a big back-end team,” said Goodkey. “We play well in the second half, usually. As seen there, it happens and good things come of it.”

The Memorial Sea-Hawks scored four in the ninth in an 8-3 win over Lethbridge. Western held off the Brock Badgers 9-6, and the Dalhousie Tigers edged UNB 8-7 in a rematch of the Atlantic University Sport championship game.

Draw three saw the women back on the ice.

Laurentian’s Kira Brunton scored points in six consecutive ends in a 10-4 win over the Regina Cougars.

“We got some breaks, and the ice was really tricky this afternoon,” said Brunton. “Everything was happening on our side.”

With the win, the Voyageurs finish Day 1 with a win and a loss.

“We didn’t want to drop two in a row,” Brunton said.

In other games, the Pandas were 6-4 winners over the Gaels, Dalhousie joined Alberta at 2-and-0 with an 8-6 win over Brock, and Mount Allison handed UNB a 6-2 loss. 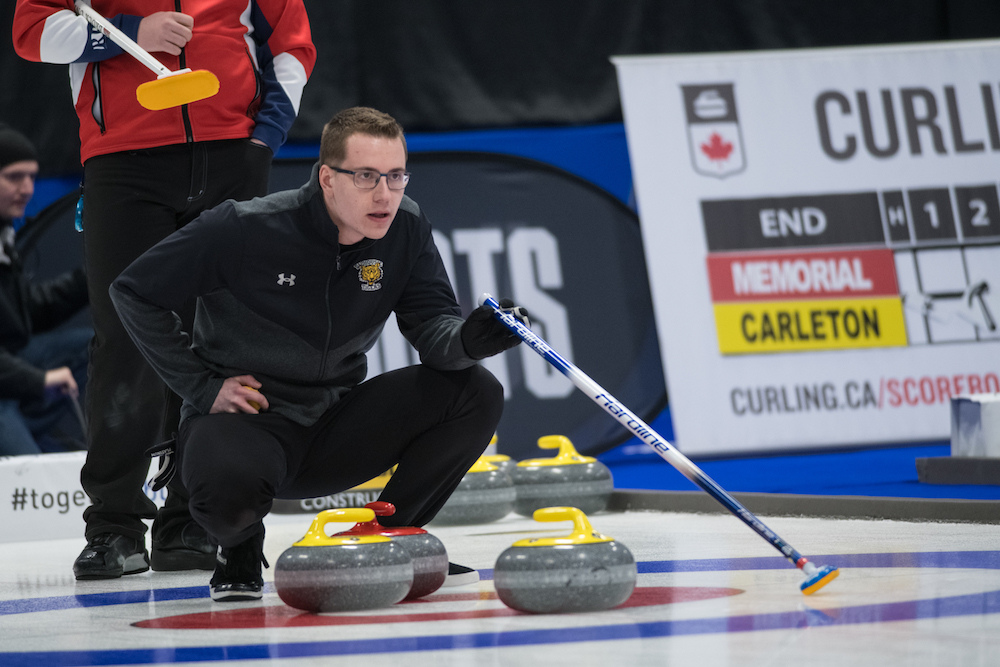 In the final draw of the day, the Golden Bears rebounded from their earlier loss with an 8-2 win over the Lethbridge Pronghorns.

Alberta scored a pair in the sixth and three more in the eighth, and the two sides shook hands.

The host UNB Reds stole a single point in the 10th end to beat the Western Mustangs 6-5.

“We pulled out the win, barely, by the edge of our teeth,” said Reds skip Jack Smeltzer. “He was making everything, but we just kept putting the pressure on him and eventually he cracked.”

Day two of the championships begins Saturday, at 7:30pm Eastern.