Regina quarterback Noah Picton threw two touchdown passes in the fourth quarter to put the game out of reach for the East, paving the way for a 37-13 West victory during the 15th annual U SPORTS Valero East-West Bowl at TELUS-UL Stadium in front of 6,528 fans in Quebec City on Saturday afternoon 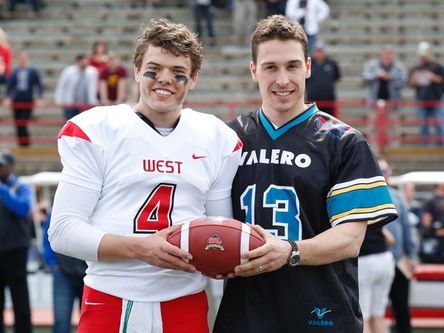 Picton, who won the Hec Crighton Trophy in 2016, awarded to the most outstanding U SPORTS player, continued his stellar year when he was awarded the game’s MVP title for the West, after completing 15 passes in 20 attempts for 228 yards and two majors, in addition to scoring one himself on the field.

With a second consecutive win, the West improves its record to 9-6 since the Canadian Football League top prospects game was inaugurated in 2003.

“It was good to cap off the week like that! With these all-star games, you never know how well you’re going to gel with your teammates or what the defense is going to throw at you. I thought that as a whole, our team executed on offense and defense and we just connected together at the right time,” said Picton, who also complimented his offensive line.  “Our offensive line in Regina is good, but we had stars here.  It sometimes felt like being in front of a brick wall!”

“It’s not about the win necessarily, but it’s nice to get it for sure,” he said. “All these guys are competitors, and I’m happy for our players that they were victorious today.  It’s great to see the week’s efforts get rewarded.” 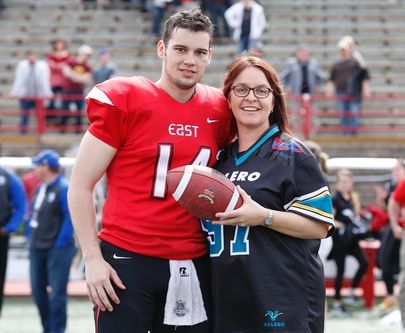 For the East, the MVP title was awarded to Bishop’s Gaiters kicker Vincent Dubé, who was responsible for his team’s 13 points with four field goals and one single.

“The guys in front of me, the long snapper and the holder all did great work.  I was just happy to be here,” said the Montmagny, Que., native.  “It’s 45 minutes away from the stadium, so it was like playing at home.

“With the Gaiters’ transfer to the Maritimes, it was the last opportunity I had to play at Laval University and I took advantage of it,” he added.

“It was a great experience,” said East head coach Gary Waterman of the StFX X-Men.  “As I’ve said all week, it’s been fantastic to work with many talented individuals from Canada. That applies to the coaches too, and being able to see the great work they do.”

Waterman also had compliments for the host institution of the U SPORTS Valero East-West Bowl.

“You can’t say enough about the quality of the organization that Laval is. From (head coach) Glen Constantin, to the football team, and even across campus and in the community, they came together to have a welcoming and well-organized event.”

The West got the first scoring chance of the game on its third attack in the first quarter. However, running back Atlee Simon from the Regina Rams dropped the ball at the 1-yard line, putting an end to the threat.  The West’s defensive pressure forced the East to give up a safety. After 15 minutes of play, the West led 2-0.

The East retaliated on the first play of the second quarter. Dubé completed a 36-yard field goal to give his team a 3-2 lead, before putting up another point on the board after a long punt on the following sequence.

Hugo Richard, the newly named quarterback for Laval’s Rouge et Or, saw his pass intercepted by Jayden McKoy (Manitoba) who brought the ball back 29 yards to the East’s 4-yard line. Two plays later, Saskatchewan Huskies quarterback Kyle Siemens threw a touchdown pass to UBC's Will Watson to give a 9-4 advantage to the West. Guelph kicker Gabriel Ferraro added to his team’s lead with a single on the next kick off. Ferraro and Dubé exchanged a pair of field goals at the very end of the half, before Ferraro was about to add three points to the West’s lead, when a penalty to the East gave them a second chance to attack. Picton seized the opportunity to score a major on a three-yard run. At the half, the West held a 13-point lead, 20-7.

The kicker showdown continued during the third quarter.  Dubé completed a 14-yard field goal, his third of the game, just before his counterpart, Ferraro, stringed his second, a long 42-yard kick, to bring the gap back to a 13-point lead for the West.

The West stole the game in the fourth quarter.  After Dubé narrowed the East’s gap to 23-13, Picton threw two touchdown passes to Mitch Kernick(Waterloo) and Richmond Nketiah (Waterloo) to bring the game to 37-13.

In addition to Picton, quarterback Kyle Siemens also got in on the action for the West, completing 10 of his 18 pass attempts for 103 yards and one major.

For the East, Richard completed 11 of his 21 attempts for 153 yards and two interceptions, while Queen's quarterback Nate Hobbs was limited to 89 yards, completing 10 of his 17 throws.

Étienne Moisan (Laval) led the West with 80 yards receiving on four catches, while Guillaume Paquet of the Montreal Carabins had five catches for 92 yards. Tyler Chow (Saskatchewan) and Simon, both representing the West, led the charge on the field with 70 and 64 yards rushing, respectively.

Defensively, linebacker Nelkas Kwemo (Queen's) led both teams with nine tackles, eight of which were solo. On the West side, linebacker Danny Nesbitt (Regina) stood out with an interception, a quarterback sack and 2.5 tackles.

NOTES:  The U SPORTS Valero East-West Bowl features, in the majority of cases, U SPORTS players who will be eligible for the CFL Draft the following year ... The East team is composed of, in the majority of cases, athletes representing the Atlantic and Quebec conference institutions, as well as Queen's, Ottawa and Carleton. The West contingent is made up of football players from Canada West and the other universities from the Ontario conference ... Laval was hosting the event for the third time in its history after the 2006 and 2007 editions. The 2018 U SPORTS Valero East-West Bowl will also take place on the university campus in Sainte-Foy