The UBC Thunderbirds men and women will both be looking to defend their national championship and capture their fifth consecutive titles at the 2020 U SPORTS Swimming Championships this week in Quebec City.

The Thunderbirds men, who have won five of the past six national championships, will be gunning for their 19th title in program history, which would pull them into a tie with all-time leaders Toronto. UBC has been atop the national rankings for the entire season, and head into the championship as heavy favourites, as their 710 ranking points are well ahead of the No. 2-ranked Toronto Varsity Blues, who has 425.

The UBC women, meanwhile, are winners of eight of the past nine national titles, with their decade of dominance being interrupted only by Toronto in 2016. That win by the Varsity Blues, however, came in the same pool – the Desjardins Aquatic Centre at Laval University – that will host this week’s meet. UBC entered the year in second place, behind Canada West champions Calgary, but moved past the Dinos in the New Year. UBC enters the tournament with 693 ranking points, with Toronto second at 578 and Calgary third at 449.

This is the second time that the Laval Rouge et Or are hosting the championship in their renovated aquatic centre. This week marks the first national competition in the pool since 2020, as the 2021 events was not held due to the COVID-19 pandemic.

The championship schedule and conference by conference previews are available below. Livestreaming coverage is available for free in English on CBCSports.ca, CBC Gem, and the CBC Sports app for iOS and Android devices, and in French on www.USPORTS.ca. 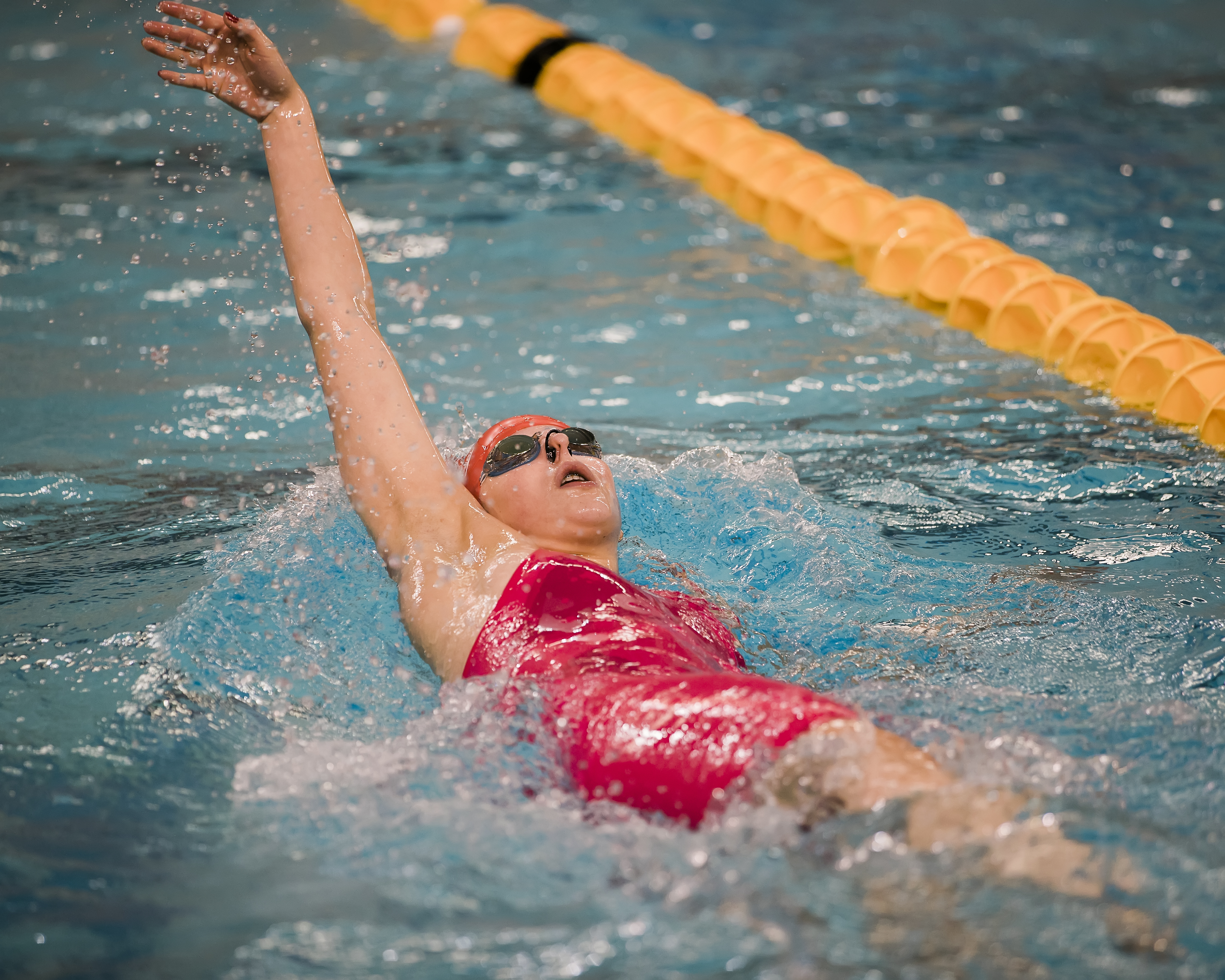 Leading Calgary to their 9th Canada West banner was second-year Dino Rebecca Smith, who was named the 2021 Canada West Female Swimmer of the Meet. Smith finished the weekend with a gold medal in every event she entered, setting new Canada West records in four of them.

Smith earned gold medals in the 100m freestyle and the 4x100m Medley Relay on Sunday, securing the team title for the Dinos. The Calgary women captured 15 total medals at Kinsmen Sports Centre in Edmonton, eight of which were gold.

On the men's side, the UBC Thunderbirds continued their dominance of Canada West, finishing 175 points ahead of the Calgary Dinos. The Victoria Vikes earned the team bronze medal in the both the men and women's standings.

Powering the T-Birds was Blake Tierney, who finished with seven medals, along with Dmitriy Lim's five medals, and rookie Tayden De Pol's four.

First-year Lethbridge Pronghorn Apollo Hess earned both the male Swimmer of the Meet, and the Rookie of the Year awards after a stellar weekend in Edmonton. The breaststroke specialist earned five total medals, setting new Canada West records in the 50m and 200m breaststroke. 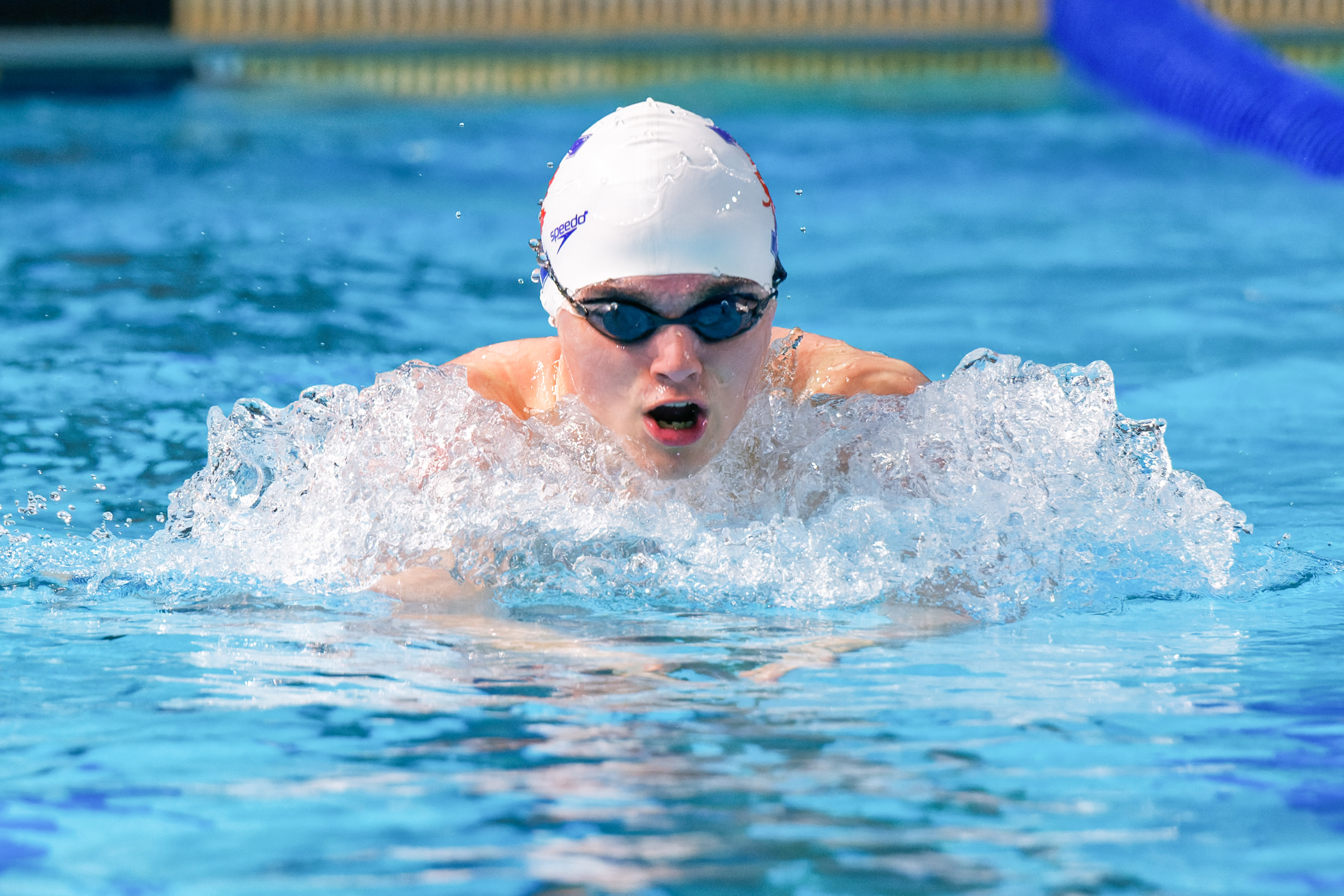 The Varsity Blues women took five of seven gold medals in the meet’s final session to clinch their title, highlighted by rookie Raili Kary who picked up her third gold medal of the championship, which led to her being named not only the OUA female rookie of the year, but also the OUA female swimmer of the year. U of T's Ainsley McMurray also picked up three individual gold medals.

Earning the team silver medal was the Western Mustangs, finishing over 80 points ahead of the bronze medalists, McMaster Marauders.

In a battle for the team silver medals, the Western Mustangs did their best to gain ground on the Waterloo Warriors with a late push, winning a bronze in the 200 IM and then taking silver in the 400 freestyle relay, however, it wasn't quite enough, as a silver medal in the 200 IM for Waterloo's Lukas Wormald helped fend off the Western push. 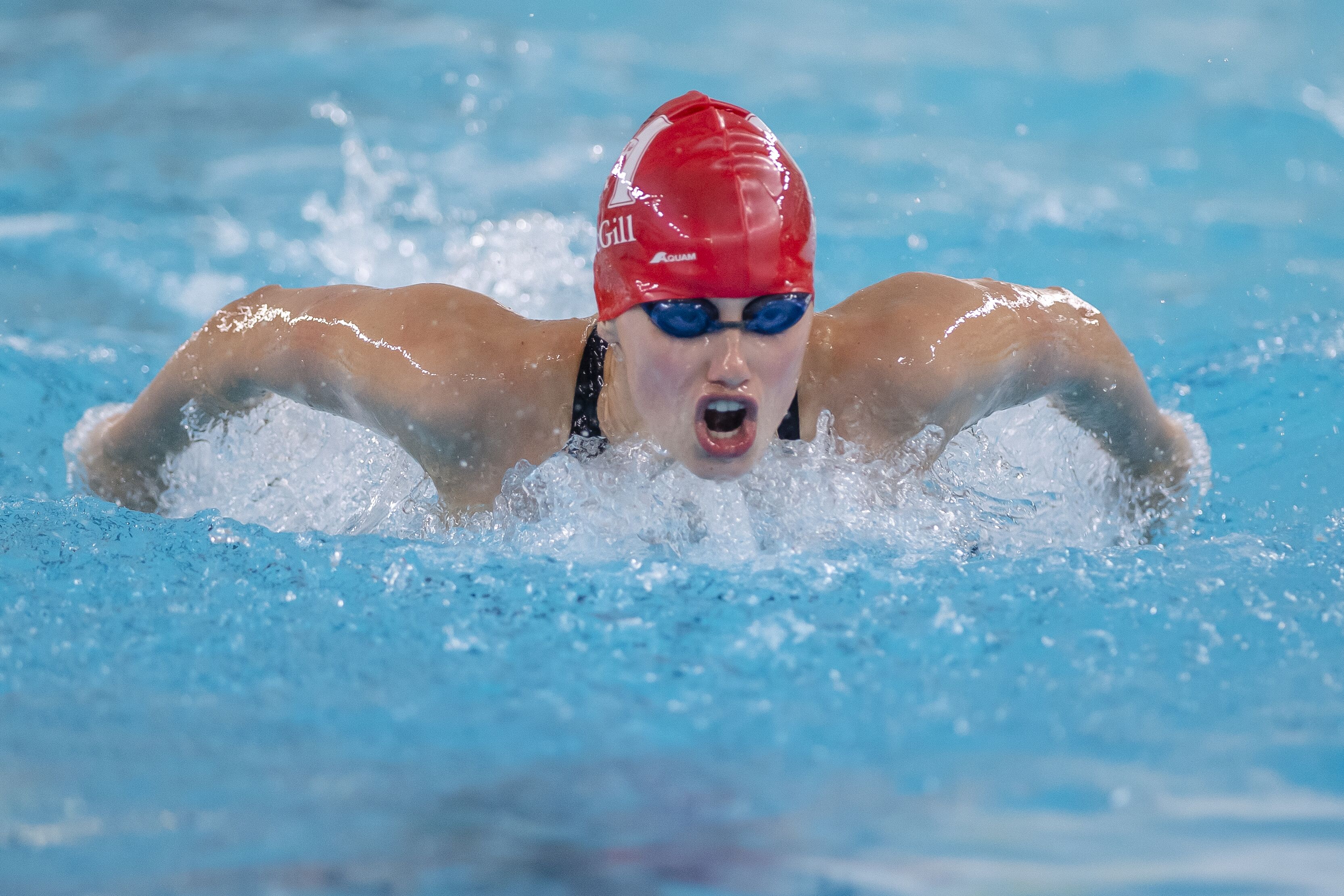 Clement Secchi collected six gold medals and broke three conference records, while Daphne Danyluk won five golds as the McGill University varsity swim program pulled off a rare triple crown by winning all three RSEQ championship banners for a second consecutive season at the conference championship in Ottawa. The Redbirds and Martlets each finished atop their respective men's and women's divisions, in addition to capturing the combined banner, which includes the total points scored by both genders.

Secchi, from Aix-en-Provence, France, was named athlete of the meet and swimmer of the year. The 21-year-old finished first in the 50, 100 and 200 butterfly events. He also took the 400 freestyle and was part of the winning 4x50 medley relay and the 4x200 freestyle relay.

Also winning a major conference award was Elizabeth Ling, who dominated the season and was named as the RSEQ female rookie of the year.

The host Ottawa Gee-Gees finished in second place on both the men’s and women’s side, while the Laval Rouge et Or won both conference bronze medals.

The Dalhousie men’s and women’s swim teams swam to victory to win the 2022 AUS Championships, marking the women’s 20th consecutive title and the men’s first since 2018-19. Both sets of Tigers cruised to victory in their home pool, scoring 1,073 points each. In the men’s event, the Acadia Axemen were second with 728 points, while the Sea-Hawks of Memorial University were third with 487 points. Mount Allison (285) and UNB (284) rounded out the top five. On the women’s side, Memorial won the team silver medal with 576, while UNB squeaked past Acadia for bronze, scoring 476 points to the Axewomen’s 474.5. Mount Allison scored 230.5 points to finish fifth.

Dalhousie's Reagan Crowell led a podium sweep of the women’s 800m freestyle event. She clocked in with a U SPORTS-qualifying time of 8:55.71 and was named swimmer of the meet.

Acadia’s Gordon Shortt won gold in the men’s 50m breaststroke and was followed closely by Dalhousie’s Adam Bouma in second and Memorial’s Cormac Bull in third. Both Shortt and Bouma posted U SPORTS-qualifying times.

Dalhousie swimmers swept the 2022 Subway AUS Swimming Championship awards with Emilie Schofield earning women’s rookie of the meet honours. Adam Bouma was named both the rookie and swimmer of the meet on the men’s side.