The undefeated Brock Badgers have made women’s basketball history being ranked the top seed for the first time in their program’s history.

Keltos has been unconscious from beyond the arc this season, shooting threes at a 47.7 percent clip.

The Badgers defence has suffocated opponents and their 53.2 points allowed per game ranks second in U SPORTS. 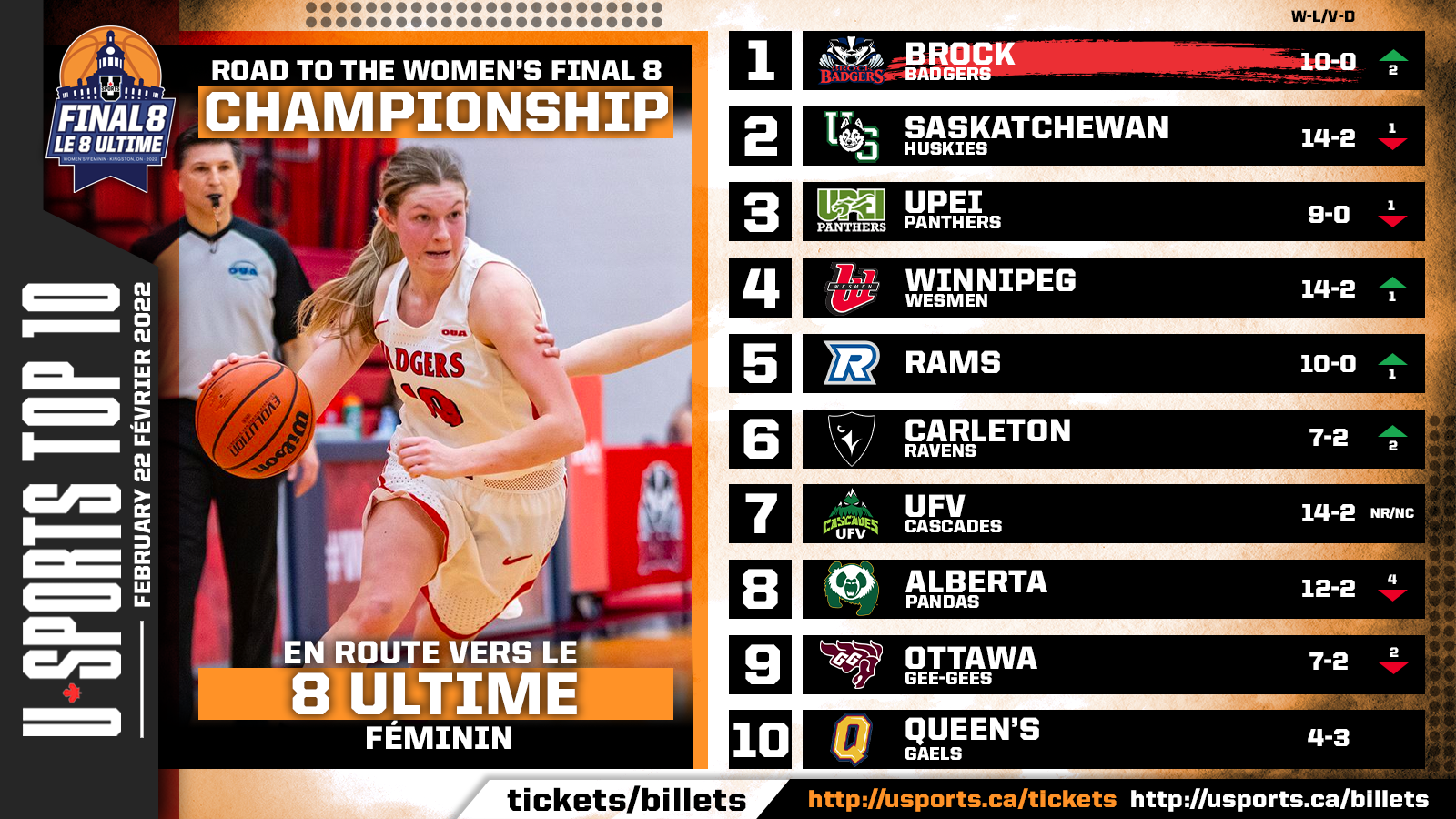 In men’s hoops, the undefeated Carleton Ravens (9-0) remain atop the rankings. The No. 1 Ravens defeated the Ottawa Gee-Gees (8-1) 71-58 in the Capital Hoops Classic last Friday to continue their dominance over the OUA East division. 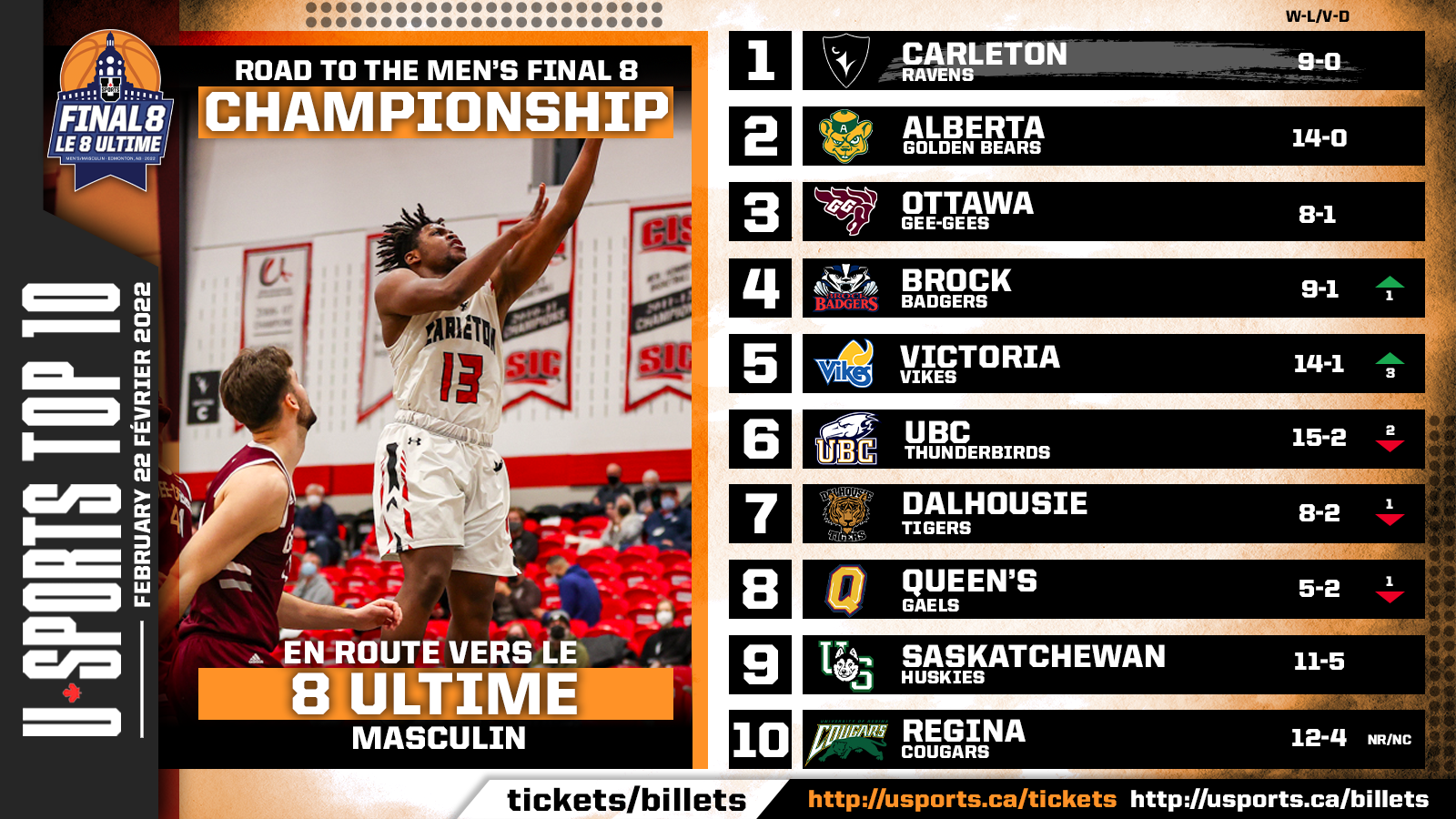 The Guelph Gryphons are the top team in both men’s and women’s track and field in the first rankings of the season.

On the women’s side, Sadie-Jane Hickson was dominant at the Hal Brown meet, hosted by the University of Toronto, running to gold in the 600m. 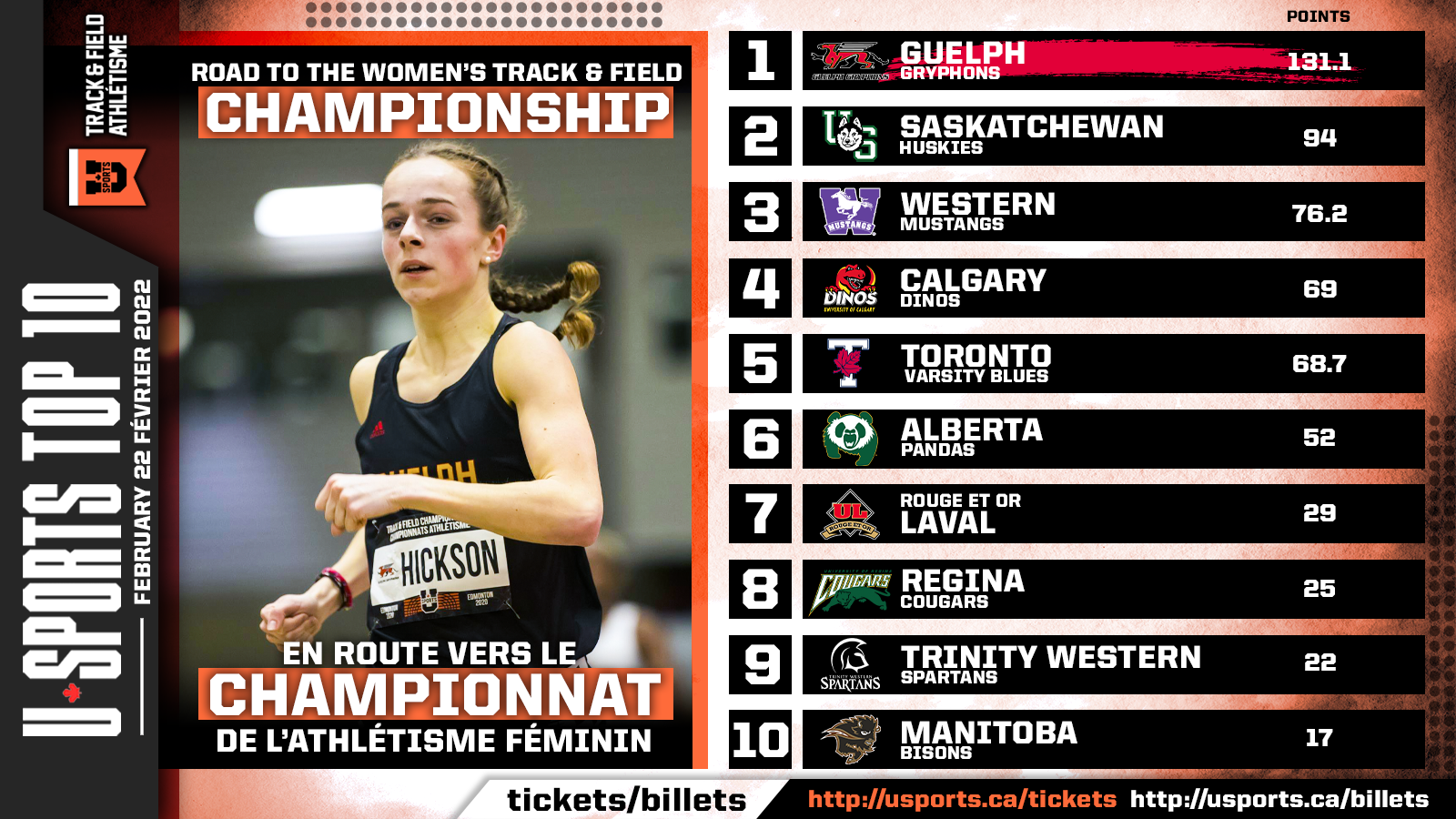 On the men’s side, Craig Thorne ran to individual gold in the 60m hurdles event at the Can-Am Track Classic held in Windsor. The third-year sprinter also captured second place in the 4x400m relay, falling second to Guelph’s other relay team. 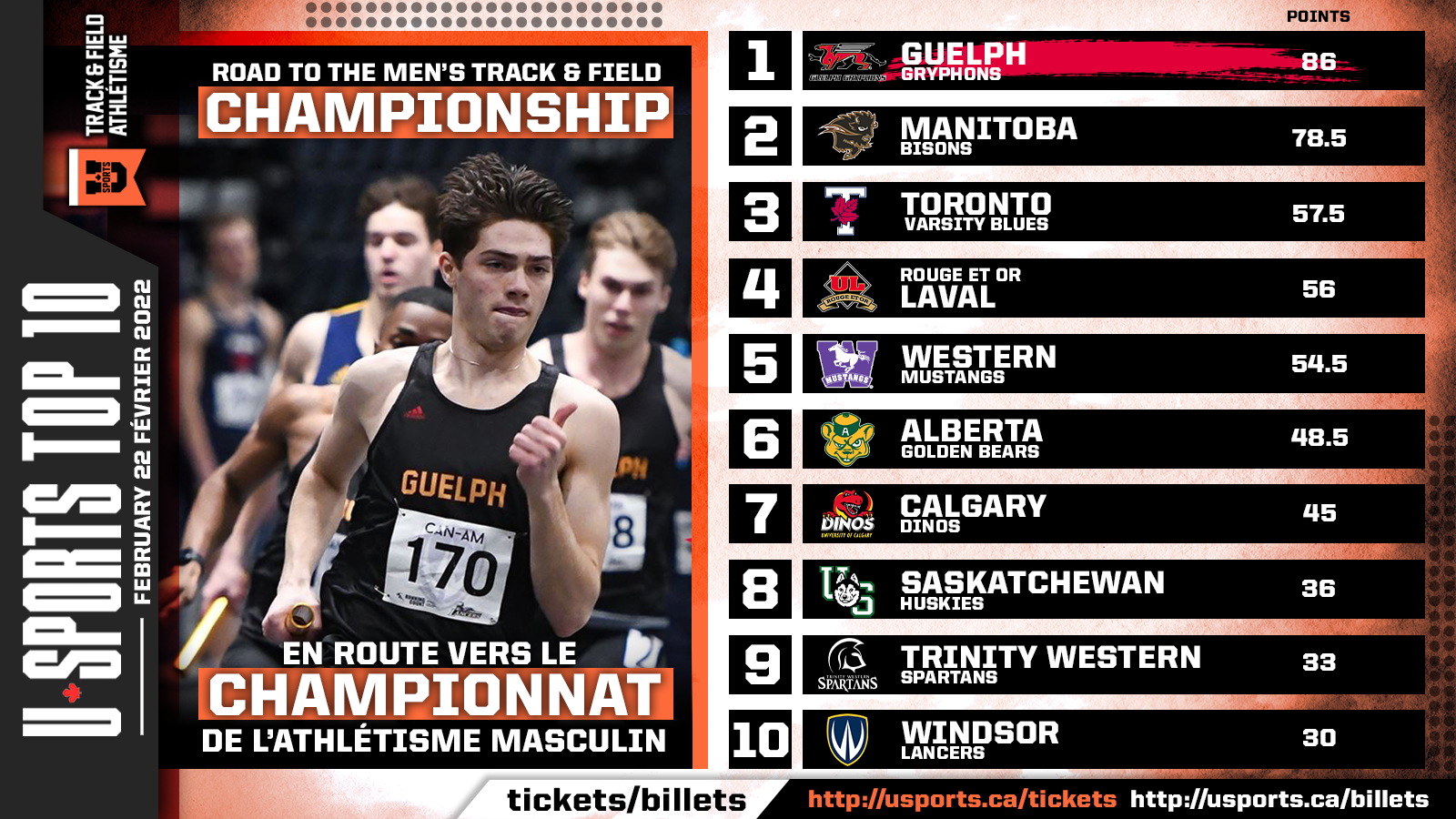 In women’s volleyball, the Trinity Western Spartans (13-1) remain the team to beat after defeating the Fraser Valley Cascades (5-9) in a pair of matches last week. The sweep gives Trinity Western 10 consecutive victories.

In the OUA, No.3 The Brock Badgers (9-0) remain undefeated and move up the rankings with a series sweep over the Western Mustangs (5-4). 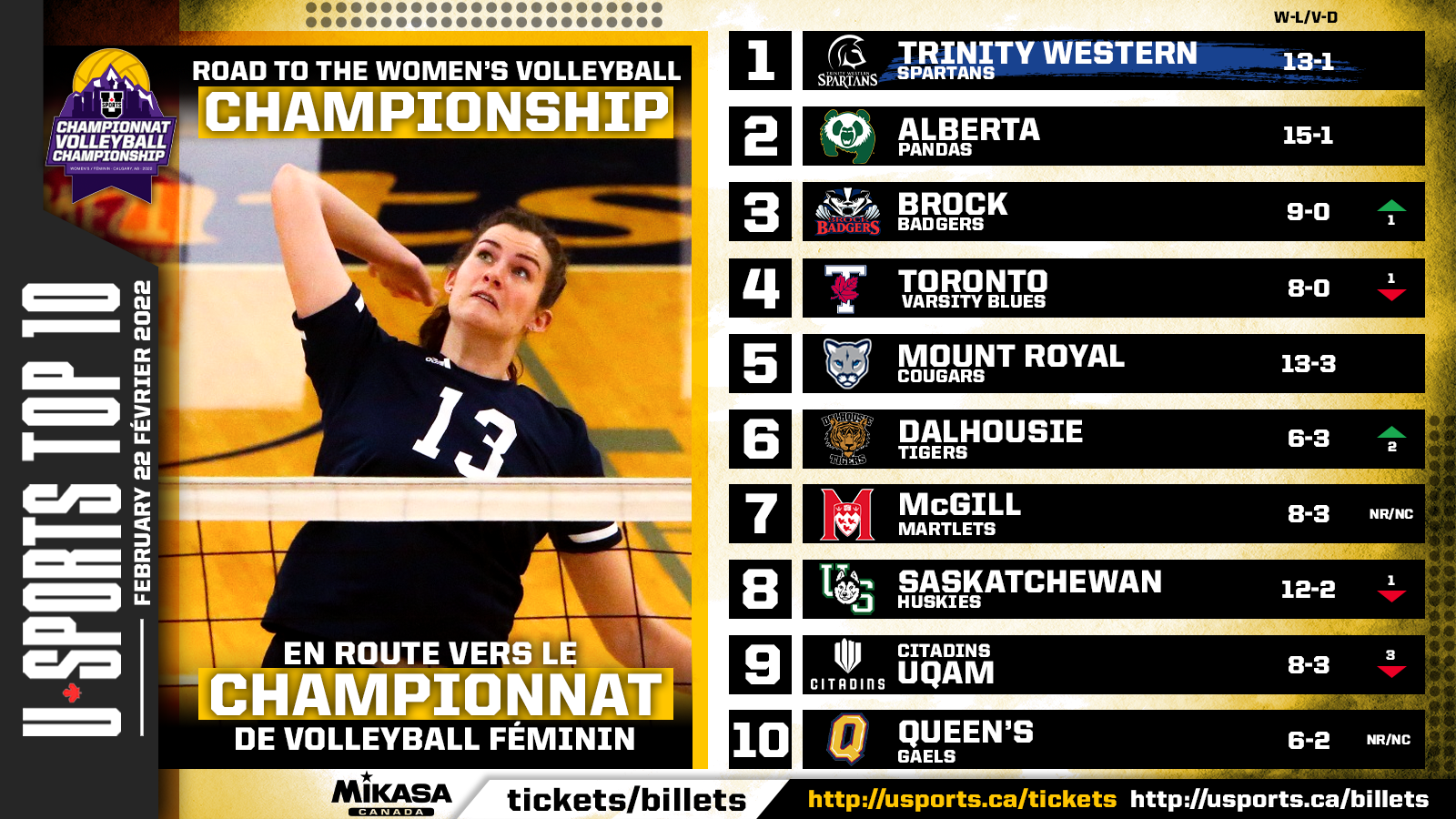 In men’s volleyball, the No.1 Trinity Western Spartans (14-0) remain the top seed after dispatching the Fraser Valley Cascades (1-15) in a pair of straight-set victories. Brodie Hofer leads the undefeated Spartans with 213 kills in 14 matches played. 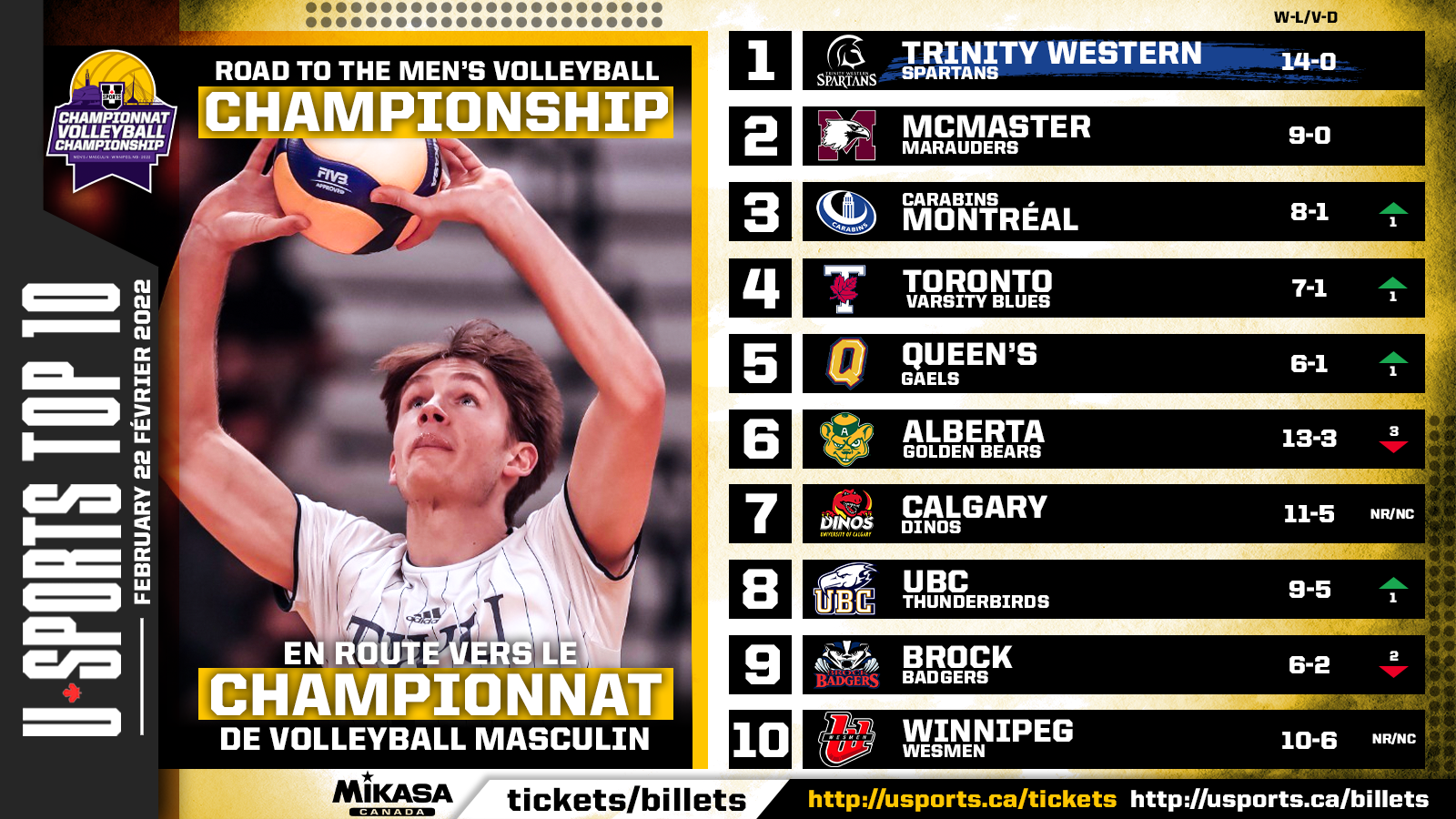 In women’s hockey, the No.1 Toronto Varsity Blues (11-1) remain the top seed for the third consecutive week in action after defeating the No. 10 Nipissing Lakers (7-3) 4-1. Céline Frappier and Lauren MacDonnell both chipped in a goal and an assist in the winning effort. 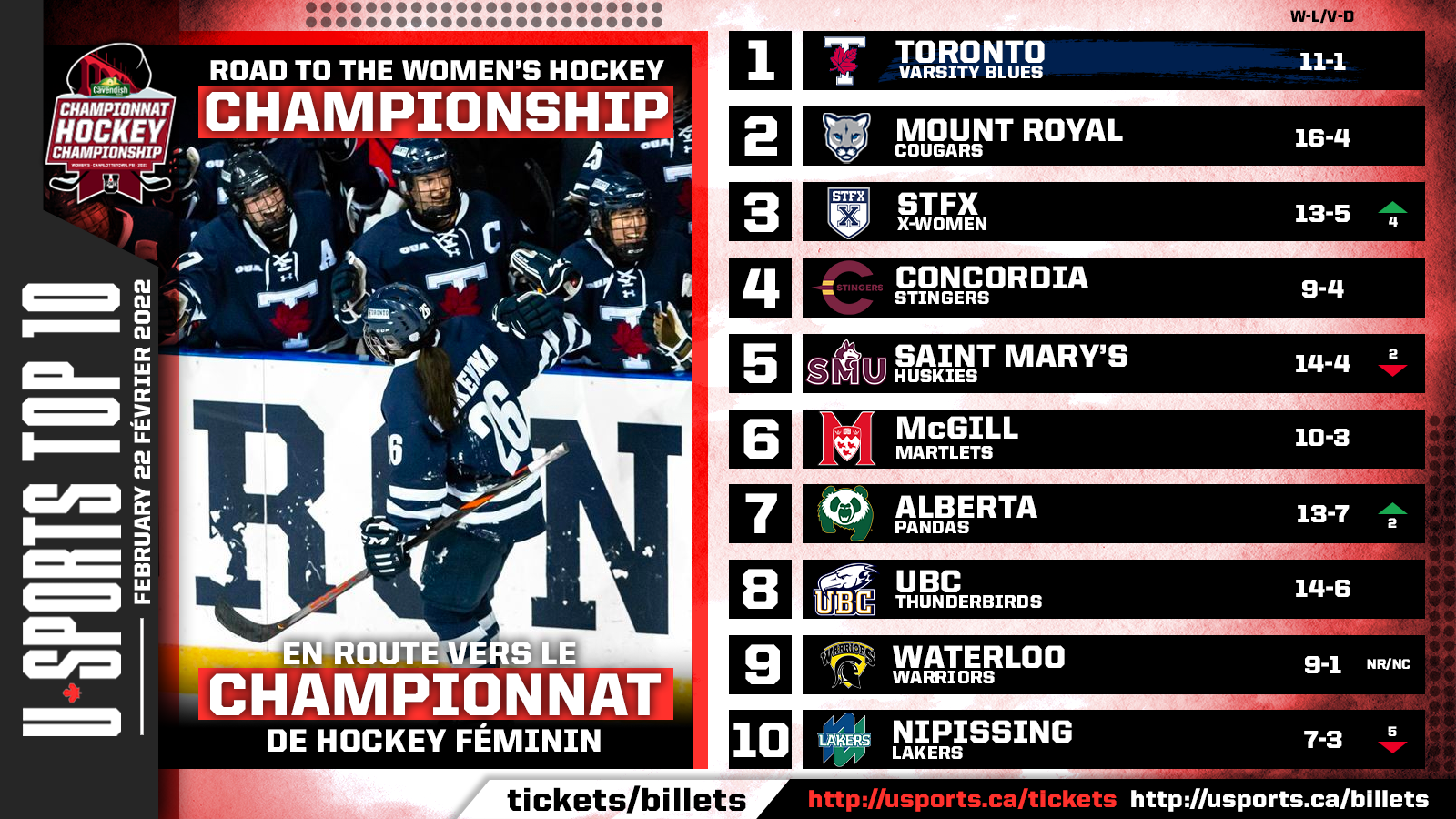 The UQTR Patriotes (6-3) jump into the No.6 position after splitting a pair of games with the Ottawa Gee-Gees (6-5) to share the lead of the OUA Far East Division. 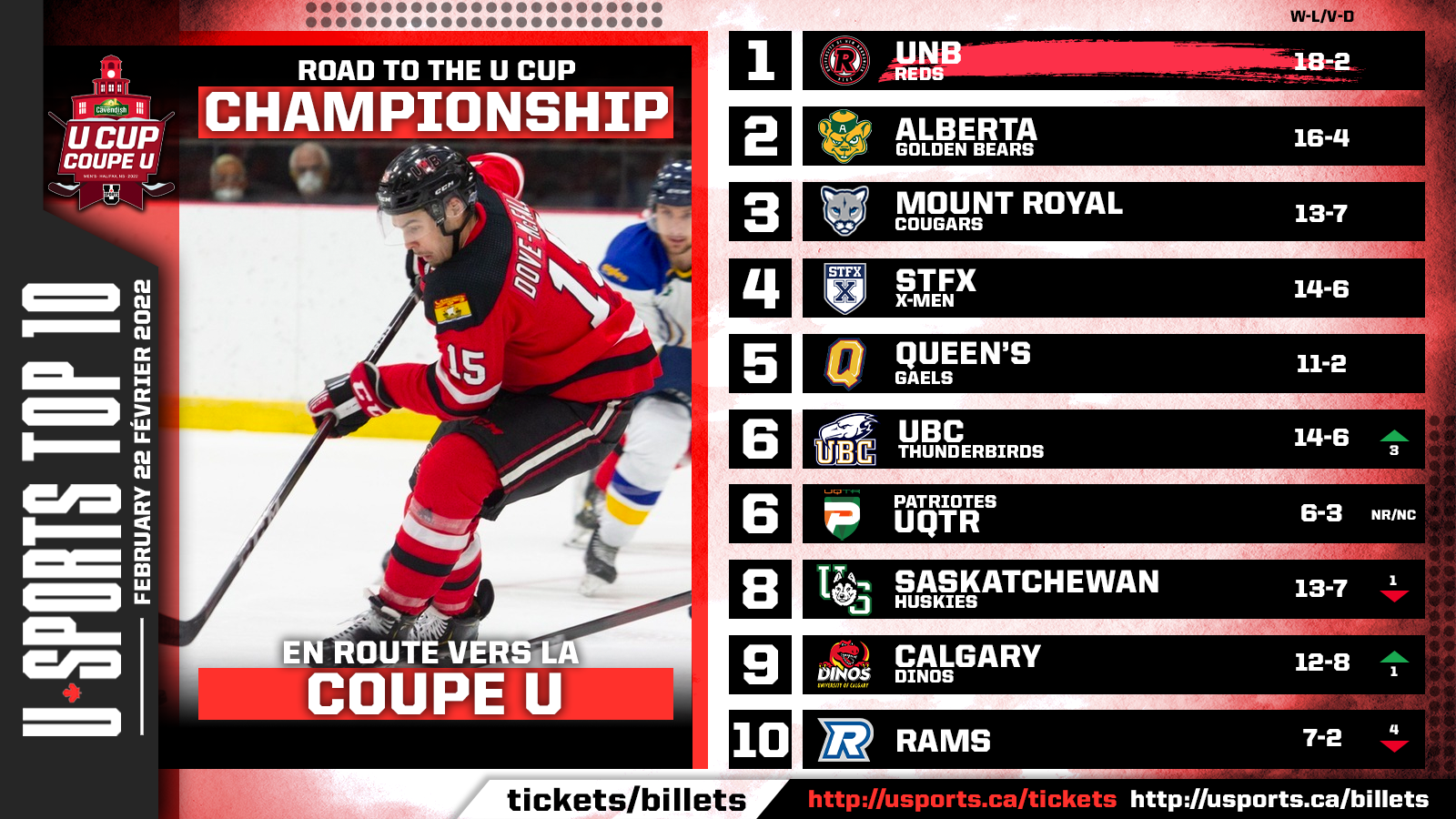 In women’s swimming, the No.1 UBC Thunderbirds remain the top squad as competition remained idle. 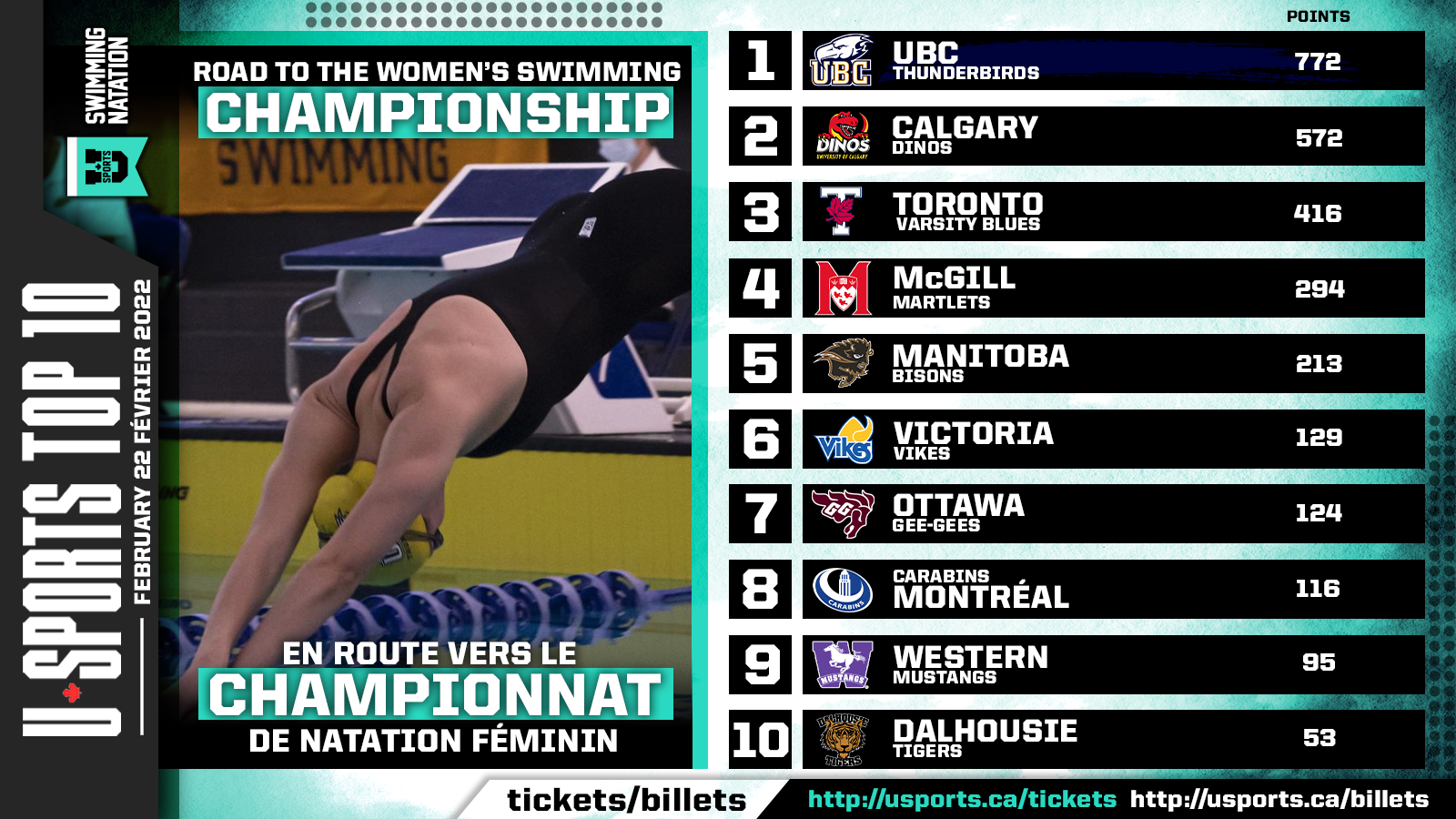 In the men’s pool, the No. 1 UBC Thunderbirds still reign supreme, sitting atop the rankings for another week. The T-Birds will look to continue their success at the U SPORTS Swimming Championships held at the University of Laval on March 24-26. 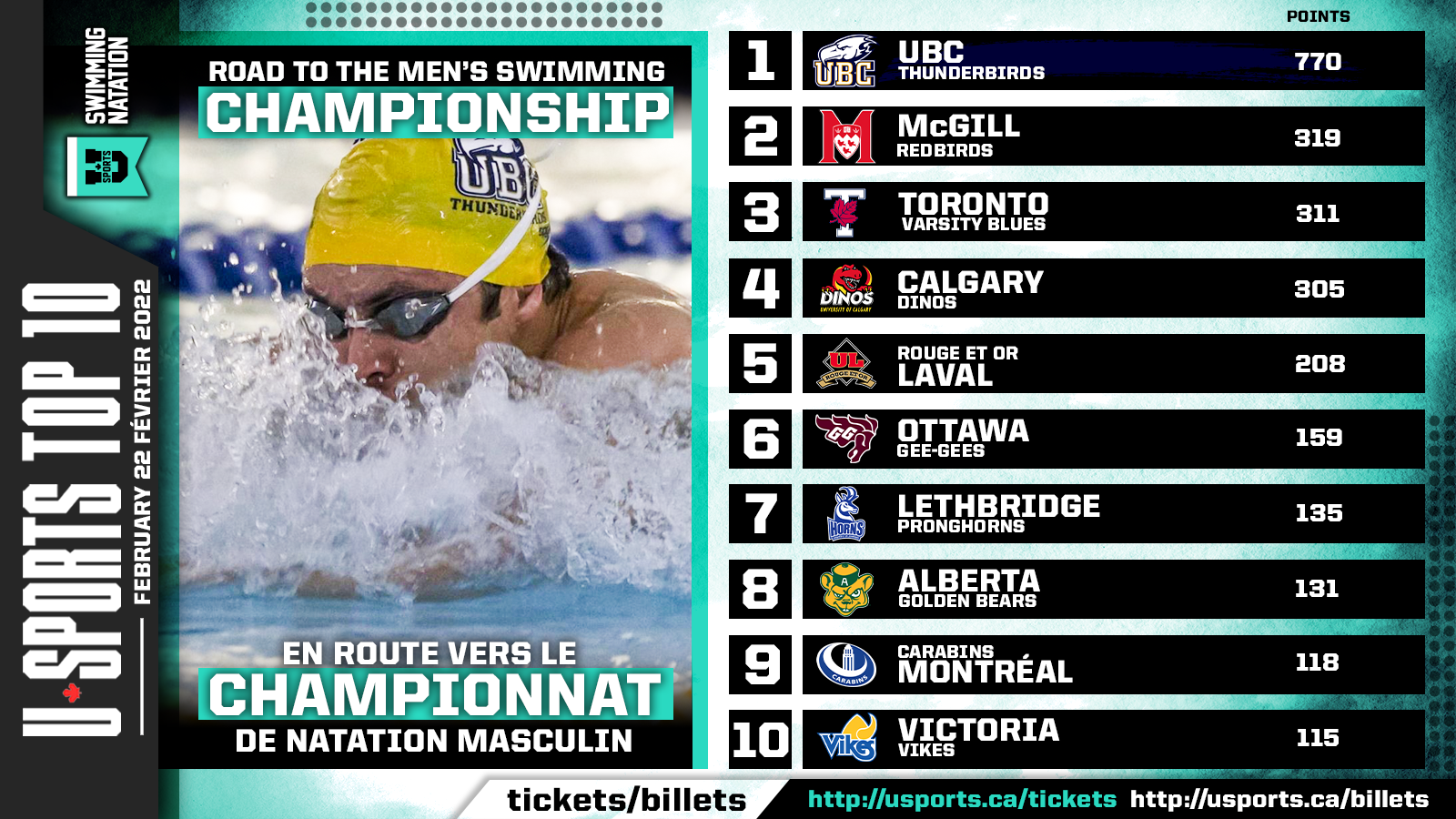