The Trinity Western Spartans were named tournament favourites on Sunday, as the seeding and quarterfinal matchups were announced for the 2022 U SPORTS Women’s Volleyball Championship.

Hosted by the Calgary Dinos, the first serve on the tournament flies on Friday and the event concludes Sunday with the gold medal game at 8 p.m. ET / 5 p.m. PT. All games be played at the Jack Simpson Gymnasium.

Livestreaming in English is available for free worldwide on CBCSports.ca, CBC Gem and the CBC Sports App, with French digital coverage carried on USPORTS.LIVE. 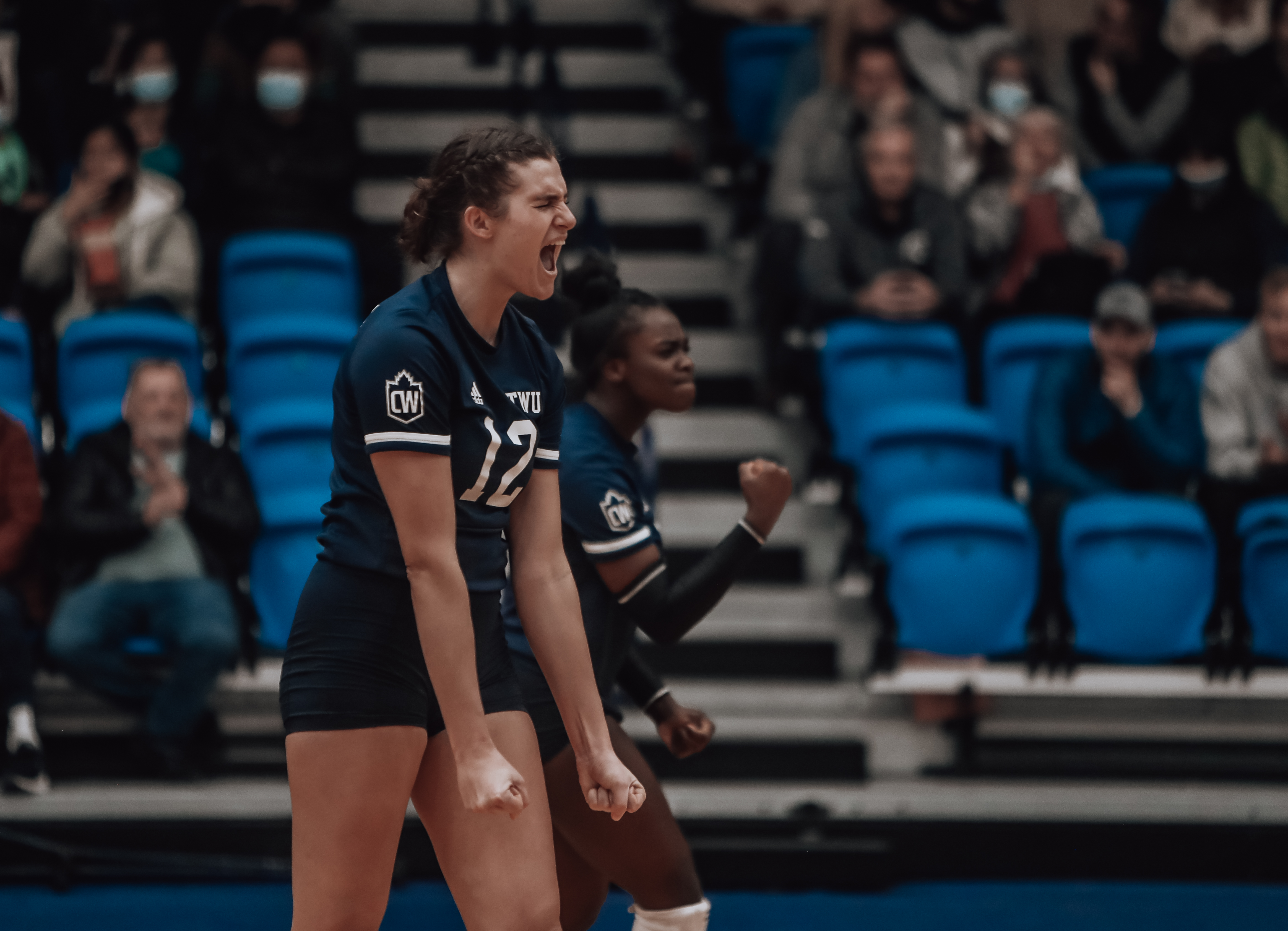 Trinity Western put together its best regular-season winning percentage in program history by going a conference-best 15-1 in Canada West. After their lone setback came in a five-setter early in the season, the Spartans finished the regular season riding a 12-match winning streak in which they only lost five sets.

With a dominant performance from the service line – TWU led Canada West with 2.43 aces per set – and a balanced attack – the Spartans had six different players average at least 1.13 kills per set, the Spartans were in form from the start of the season to the finish.

The Spartans ended the regular season ranked No. 1 in the U SPORTS Top 10 and earned several Canada West honours. Coach Ryan Hofer won Canada West Coach of the Year for the second time in his career, while Savannah Purdy and Avery Heppell were named First Team All-Stars and Kaylee Plouffe, who led the conference in blocks per set (1.13), was named to the All-Rookie Team. 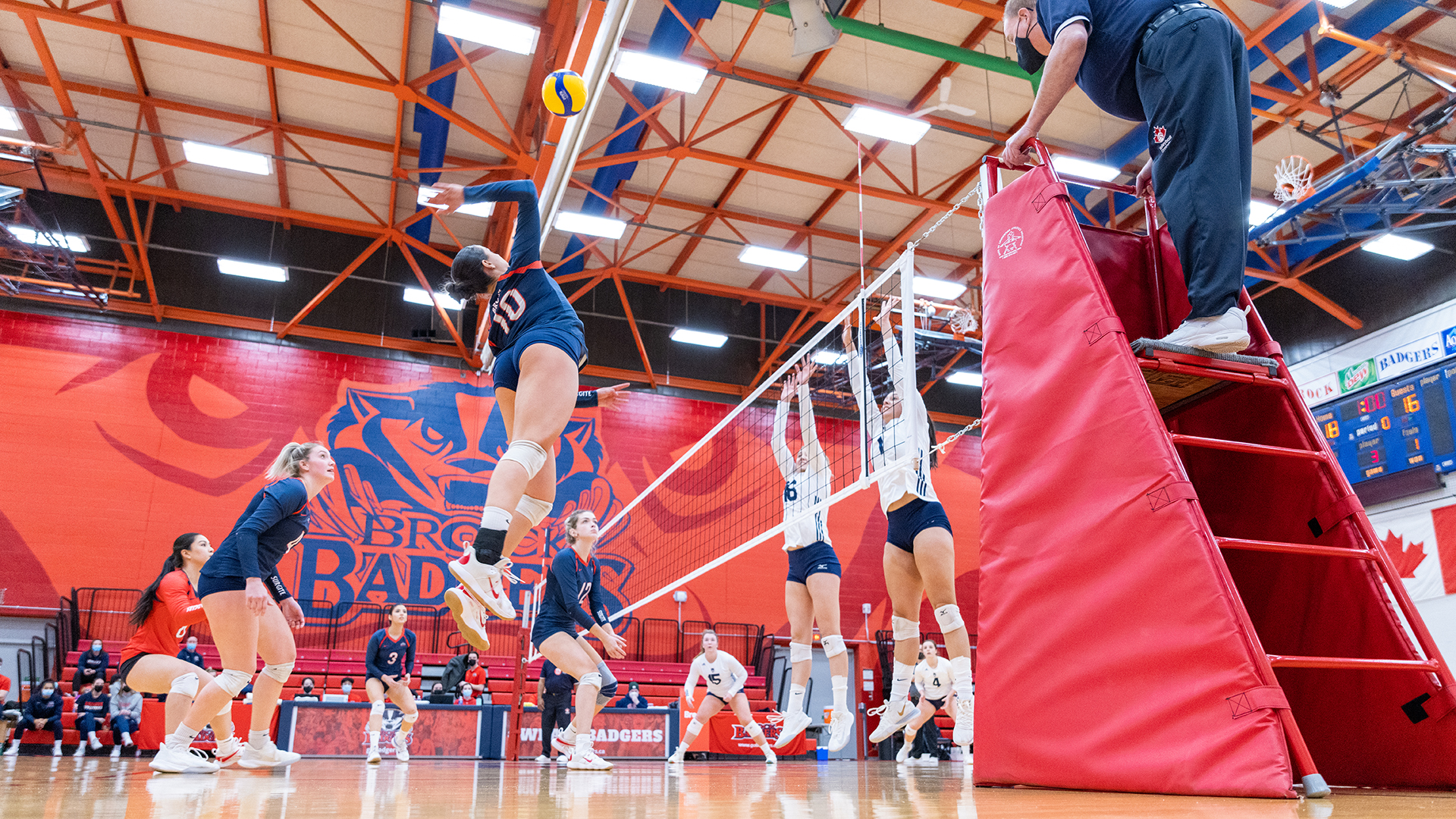 The victory extended Brock's streak to 16-0 wins to set a new team record.

Leading up to their historic win, the Badgers received a number of awards from the OUA. Head coach Steve Delaney was named OUA West Coach of the Year. Sara Rohr and Grace Pyatt each earned First Team All-Star honours while Sadie Dick and Madison Chimienti were named Second Team All-Stars. Chimienti and Dick were also named to the All-Rookie team.

The Badgers will return to Calgary, Alberta to compete in the 2022 U SPORTS Women's Volleyball Championships from March 25-27.

"This road hasn't been easy. They say whatever doesn't kill you makes you stronger, and I think that's what's happened to us," Delaney said. "Tough times motivated us to work hard to make it back to nationals. I'm just happy we did it."

In 2020, the Badgers reached the national championships for the first time in program history. However, they never had a chance to step on the court as the COVID-19 pandemic brought the world to a halt a day before they were slated to compete.

One of the few teams that remained mostly intact from 2019/20, the Pandas Volleyball team heads to Calgary as a true national title contender.

The Pandas finished second overall in Canada West with a 16-2 conference record, before earning a CW Silver medal after falling at home to the Trinity Western Spartans in the conference final.

Leading the charge for the Pandas was Canada West Player of the Year Kory White. White, who spent the 2021 season playing professionally in Hungary, led the Pandas with 245 kills this season, operating at the conference's third-best efficiency rating of .320. Her 3.89 kills per set were second-best in the league.

The Pandas, the holder of seven U SPORTS Championships under head coach Laurie Eisler, will look to make it eight this weekend in Calgary. The Pandas last national title came in 2007, when the Dinos also hosted the national tournament. 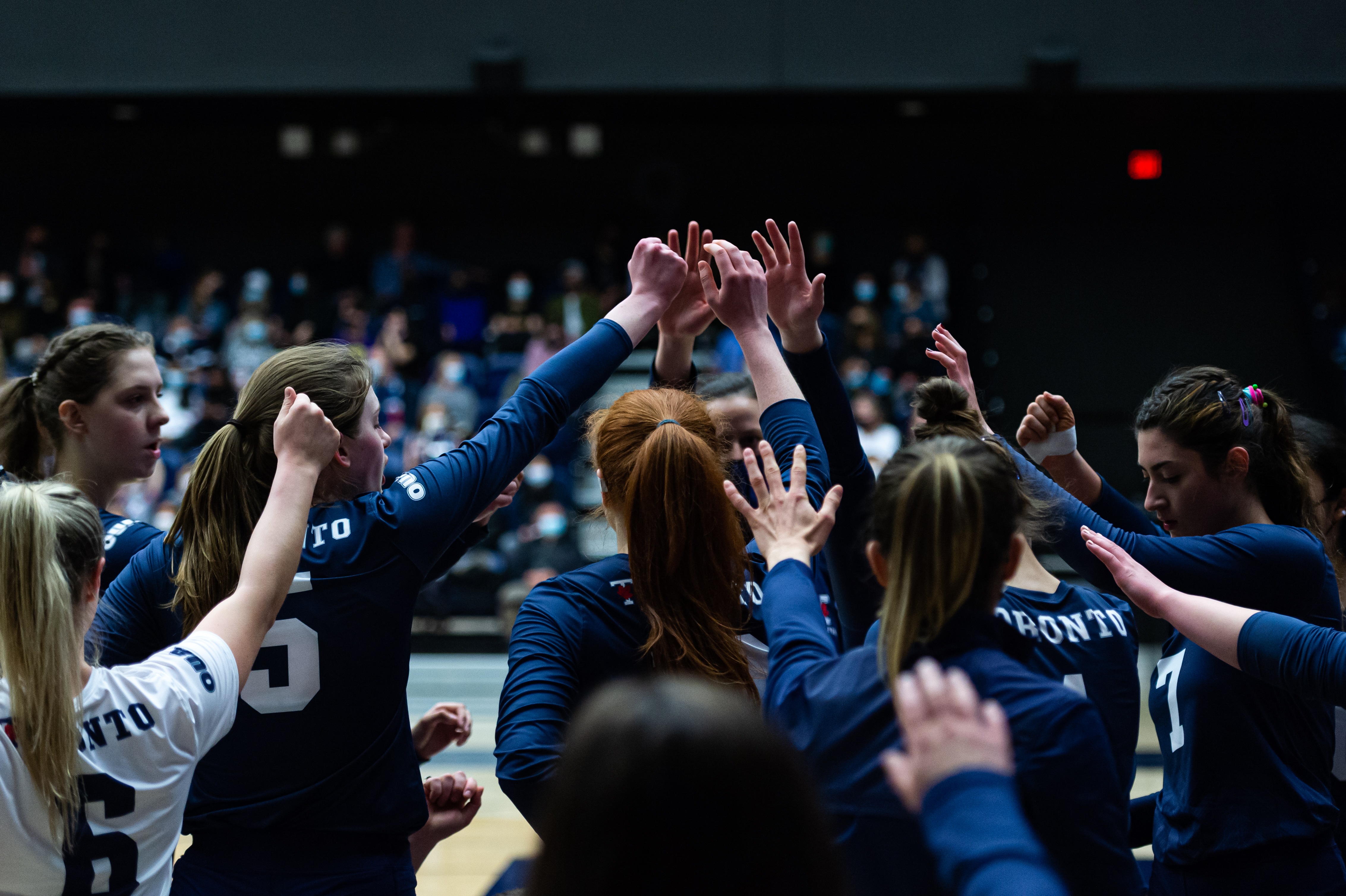 The University of Toronto women’s volleyball team put together a perfect regular season – their first since the U SPORTS championship season of 2015-16. The Blues led the OUA in hitting percentage (.279), service aces (86) and were ranked second in the province in kills per set (12.78). Toronto heads to the U SPORTS championship as the OUA silver medalists and is looking for their second U SPORTS title.

Having the right balance of veterans like middle Jenna Woock, setter Hayley Goodwin and libero Sophia Currier along with some upstart rookies in outside hitters Julia Murmann and Asya Dogruer as well as middle Anna Maria Gadomski, the Blues have the right mix of veterans and youthful energy to make a big run at the U SPORTS championship. 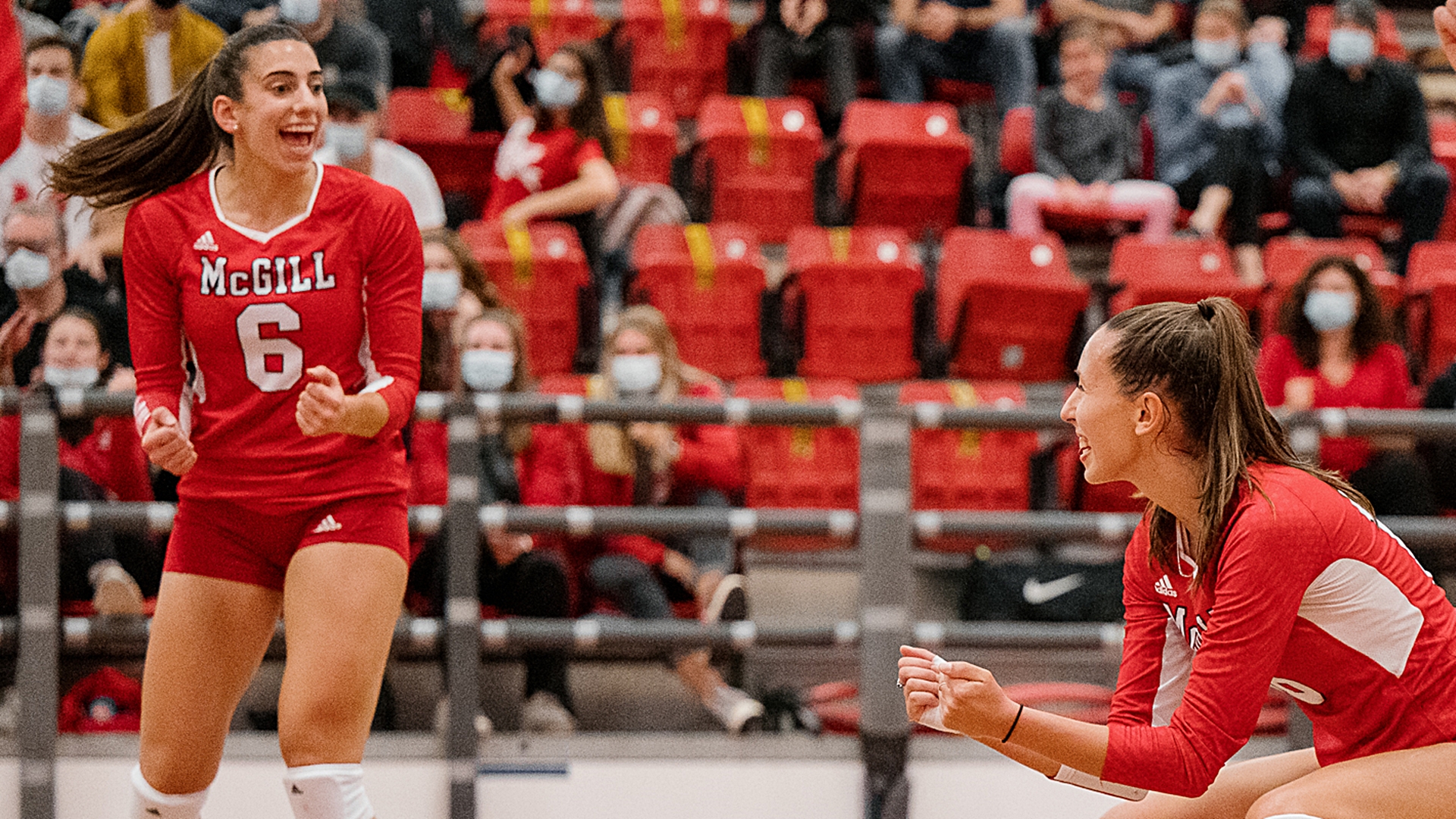 For the first time in team history, the McGill women’s volleyball team were crowned champions of the RSEQ conference after dispatching the Sherbrooke Vert et Or 3-1 in the conference finals.

The Martlets topped the RSEQ conference with a 9-3 regular-season record, before going 4-1 in the playoffs, beating the UQAM Citadins 2-1 in the semifinals and sweeping Sherbrooke 2-0 in the championship series.

Outside hitter Victoria Iannotti of St. Laurent, QC. led the charge for the RSEQ champions, averaging 3.53 points per set to go along with 2.97 kills per set during the regular season and post-season.

McGill’s offense was a focal point of their game on the championship season, accruing a total of 827 kills through 19 matches on the year. 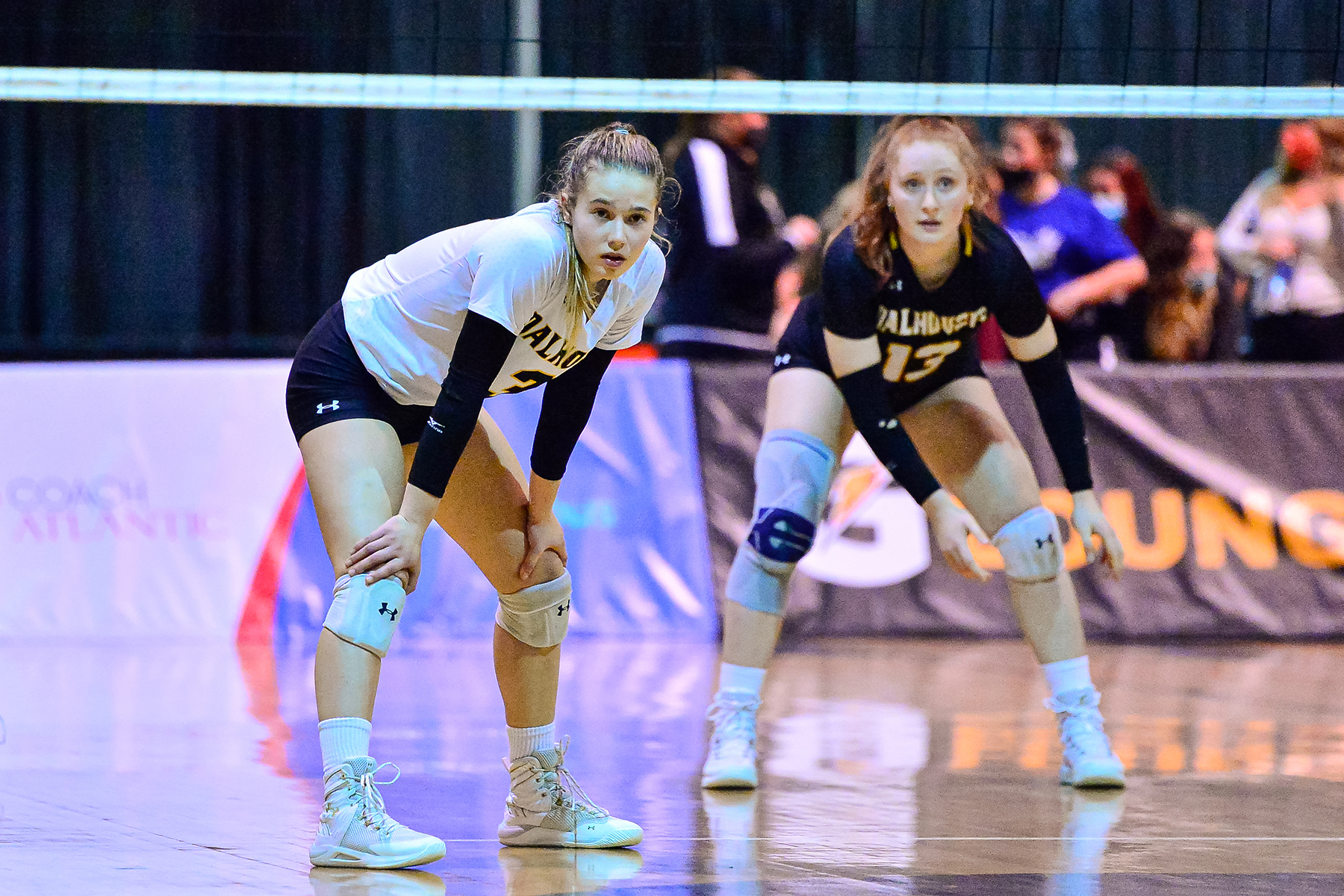 The 2021-22 Dalhousie Tigers women’s volleyball went 5-1 in exhibition play ahead of the regular season. They went 3-3 in the month of November with losses coming to Acadia twice and Saint Mary’s once.

The COVID-19 omicron variant forced a temporary pause in competition until mid-February when the Tigers rallied to finish the regular season winning four of their last six matches to earn a fourth-place ranking headed into the conference championship.

AUS first-team all-star Julie Moore led the Tigers to a 3-0 win over the Memorial Sea-Hawks in the quarter-final round before defeating the Acadia Axewomen 3-1 in the semifinal two days later.

In the best two of three Subway AUS Championship Series, the Tigers came out strong sweeping the host Saint Mary’s Huskies 2-0 with 3-1 and 3-0 victories.

Moore was named the AUS Championship MVP after earning player of the game nods in both matches. 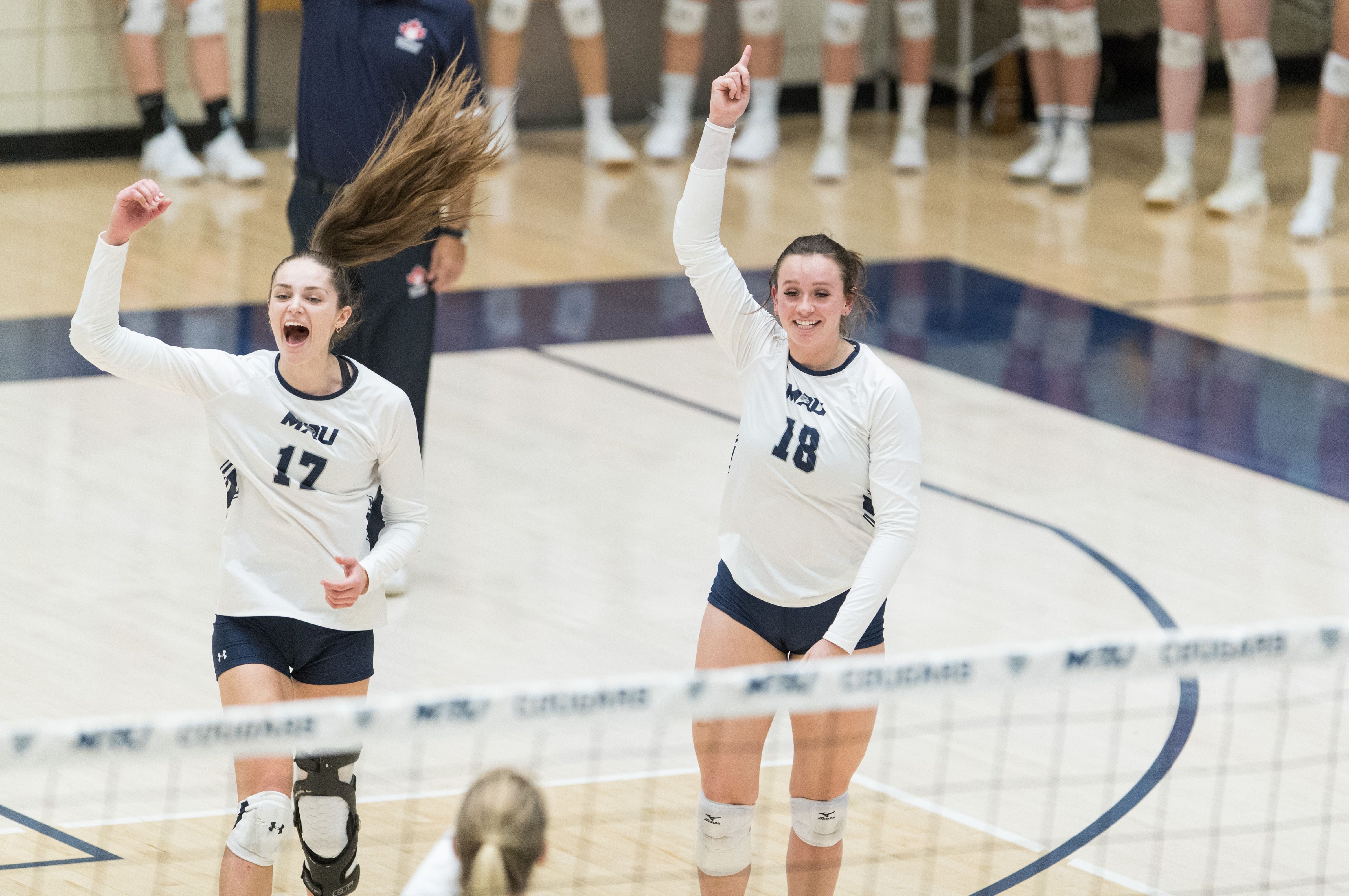 Finishing second overall in Canada West's central division with a 14-4 record and 28 points, the women's volleyball team will journey to UPEI after finishing third in the Canada West playoffs.

Captain Pelland also ranks among top Canada West players for service aces per set at .46 and assists per set at 9.25, ranking fourth and fifth overall in both categories. First-year middle blocker Mya Morgan has also stepped up to support her team defensively, leading the way with 1.24 blocks per set in Canada West.

Marshall, Haley Roe and Jessica Osczevski have provided the majority of the team's offensive power earning 204, 161 and 149 points; respectively across their 18 games. Pelland, Marshall and Klimenova have bolstered the Cougars defence with 157, 147 and 141 digs each, contributing to an average of 13.08 digs per set for the Cougars.

The University of Calgary Dinos will have their second shot at hosting the U SPORTS Women’s Volleyball Championship after the 2020 tournament was cancelled on the eve of opening day.

While Calgary enters the national championship in a similar underdog role, the 2022 edition of the Dinos is nearly unrecognizable to the one that would have taken the court two years ago.

Senior outside hitter Kenzie Vandeering, who has appeared in each of the past four national championships, has led the Dinos through a challenging interprovincial schedule that has included multiple matchups with conference medalists Alberta and Mount Royal.

This young Dinos roster has seen first-year players emerge as impact performers. Michela Alongi ranked fourth in Canada West with 3.68 digs per set, while Sheridan Coninx’s 0.86 blocks per set placed her seventh in the conference. Matched up against some of the best teams in the country all season, the Dinos are battle-tested for this tournament. 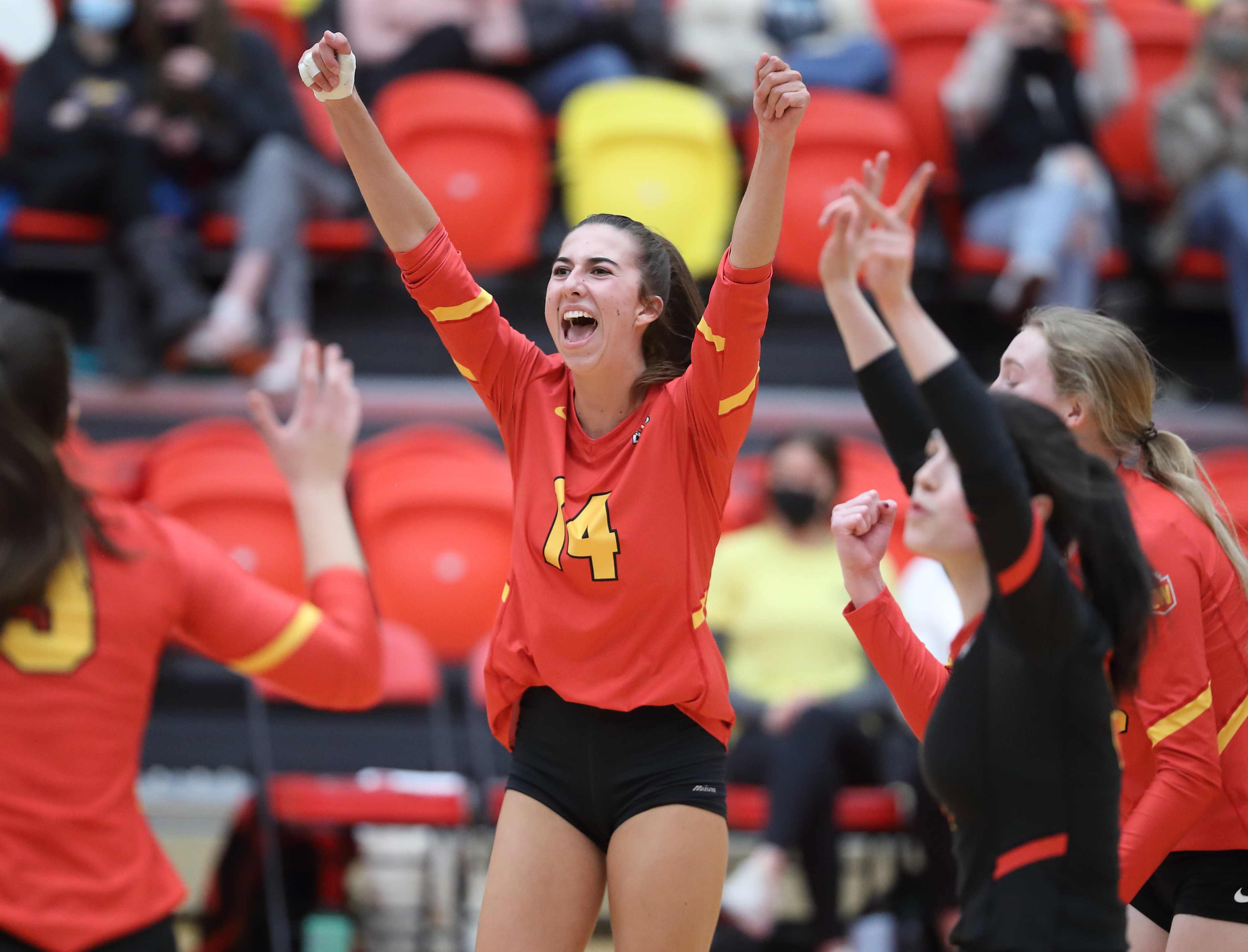