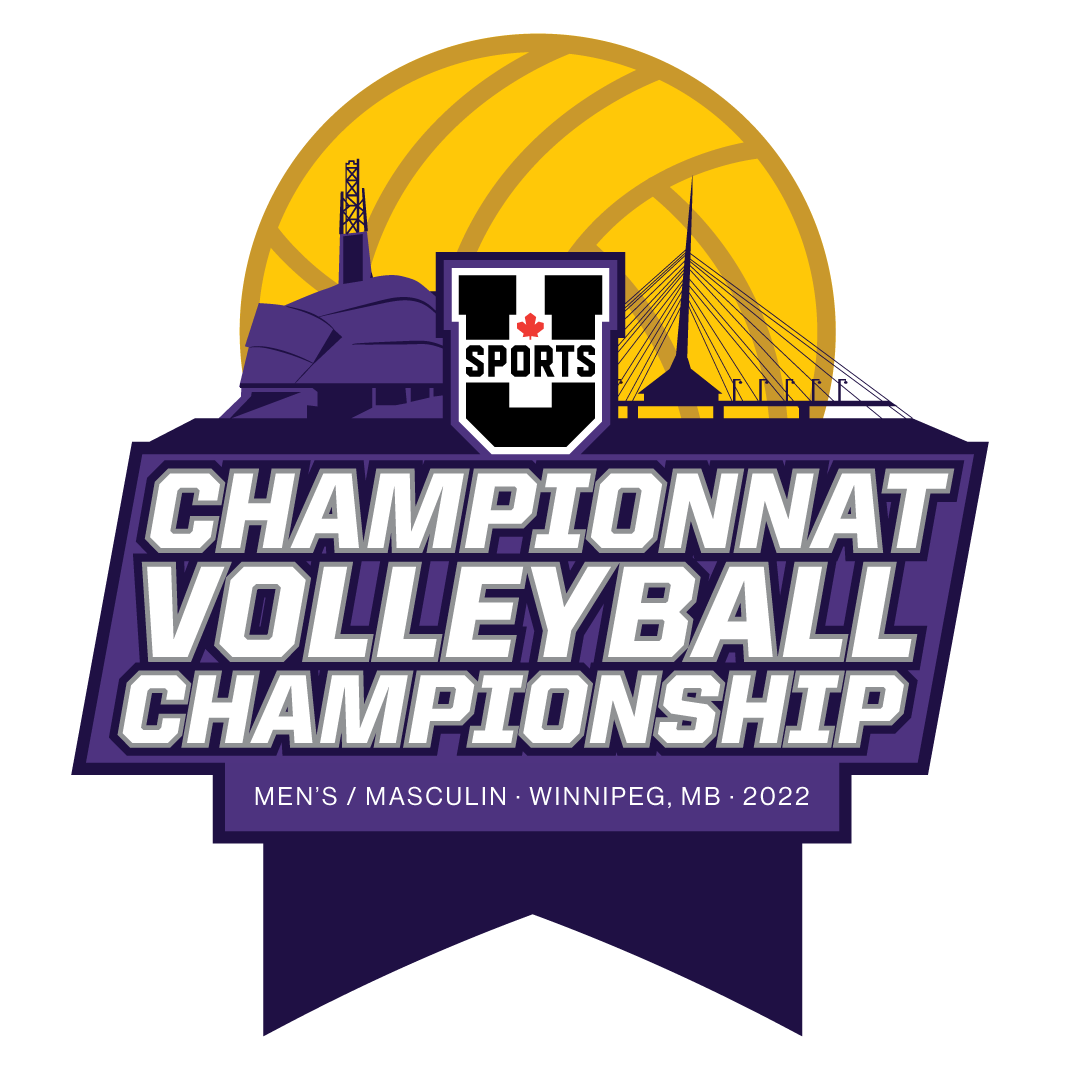 The Trinity Western Spartans were named tournament favourites on Sunday, as the seeding and quarterfinal matchups were announced for the 2022 U SPORTS Men’s Volleyball Championship.

Hosted for just the second time by Manitoba and first since 1976, the first serve on the tournament flies on Friday and the event concludes Sunday with the gold medal game at 6 p.m. ET / 3 p.m. PT. All games be played at the Investors Group Athletic Centre.

Livestreaming in English is available for free worldwide on CBCSports.ca, CBC Gem and the CBC Sports App, with French digital coverage carried on USPORTS.LIVE. 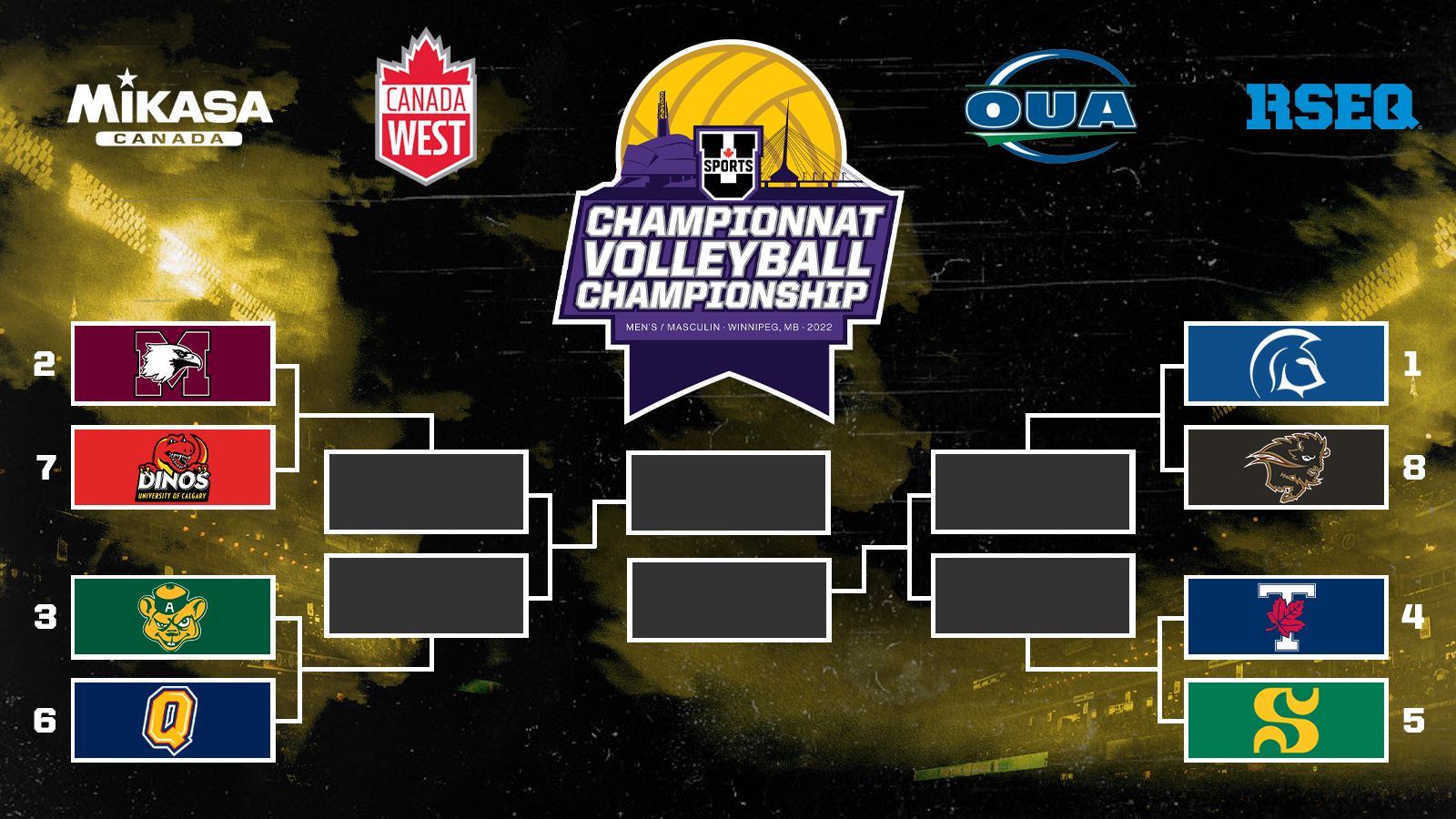 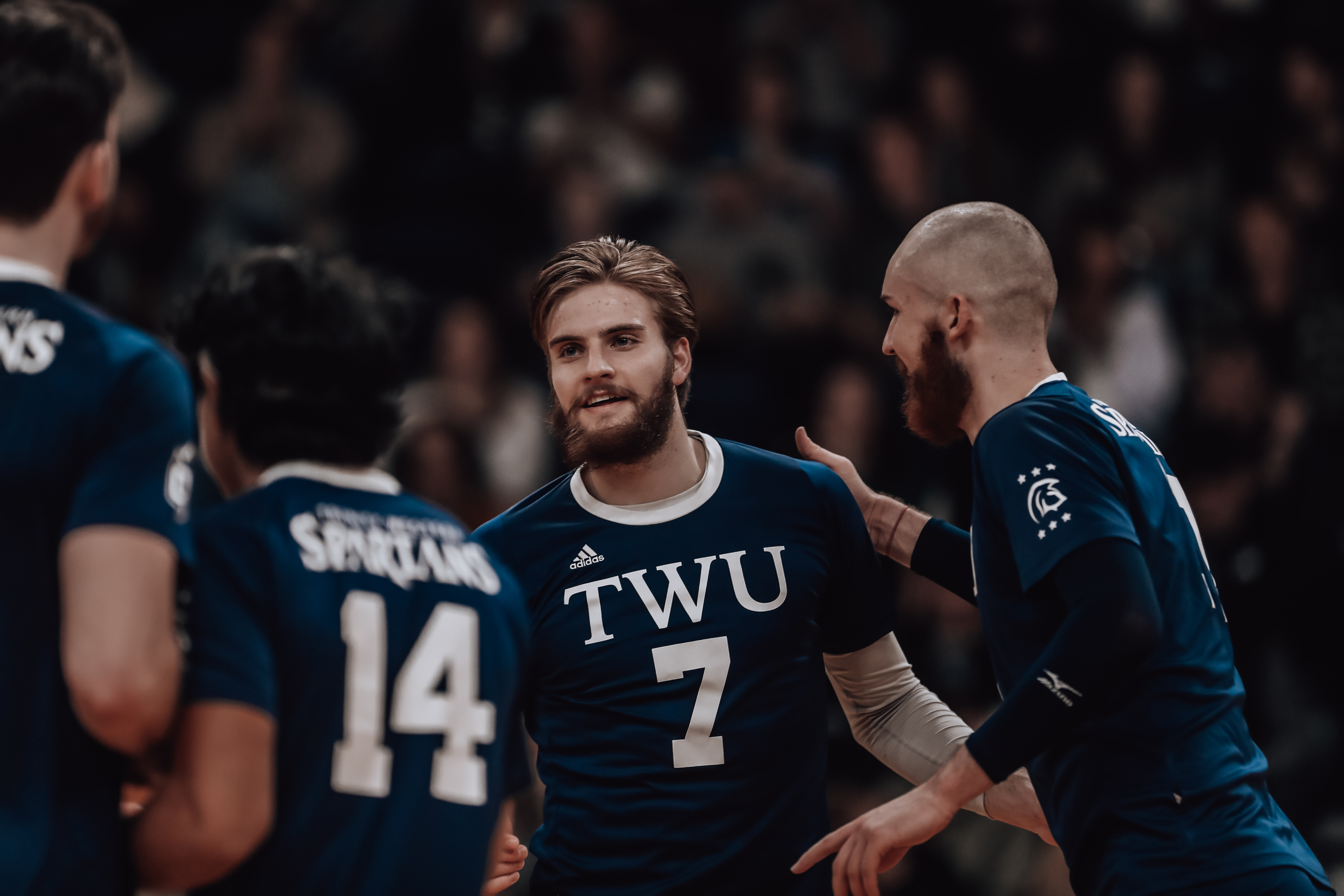 Trinity Western put together one of the most dominant regular seasons in program history, completing a near-perfect 15-1 campaign that placed the Spartans atop Canada West. On the strength of a deep squad and a unique 6-2 offence, TWU’s offence – dreamed up by Canada West Coach of the Year Ben Josephson – led the conference in hitting percentage at .330.

The Spartans were ranked No. 1 in U SPORTS throughout the season and dropped only 17 sets total in their 16 outings. Led by Canada West Player of the Year Derek Epp, as well as fellow All-Stars Brodie Hofer and Jackson Howe, the Spartans were a symbol of success all season. Hofer led the attack by setting a TWU record with 4.35 kills per set. Howe crushed balls from the middle, averaging 2.18 kills per set while earning 0.87 blocks per set. And Epp guided the offence from a 6-2 set-up that saw him average 7.92 assists per set and, impressively, 1.1 points per set. 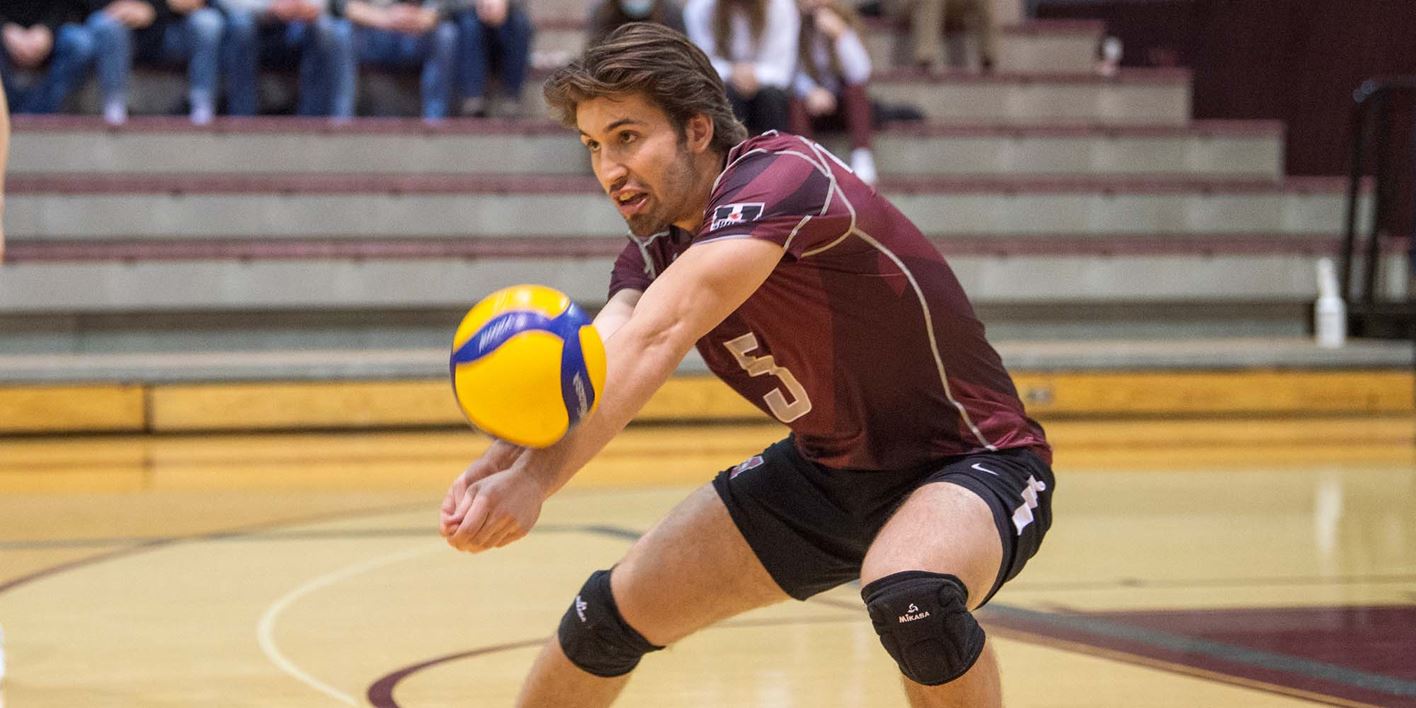 Putting together a perfect regular season for the first time since 2017 – a season where the squad finished as high as U SPORTS bronze medalists – the men's volleyball team looks poised to make yet another deep playoff run. The Marauders led the OUA in nearly every statistical category during the regular season, ranking first in kills per set (11.63), hitting percentage (.319), assists per set (11.17), service aces per set (2.63), digs per set (8.93) and points per set (16.8), while ranking second in blocks per set (2.51).

Qualified to the OUA Forsyth Cup championship game for over a decade, capturing seven straight OUA championships in that period going for nine in a span of 13 years dating back to the 2007-08 season. The team will enter the U SPORTS Championships as the only undefeated program in the country if they maintain their streak through to the final. 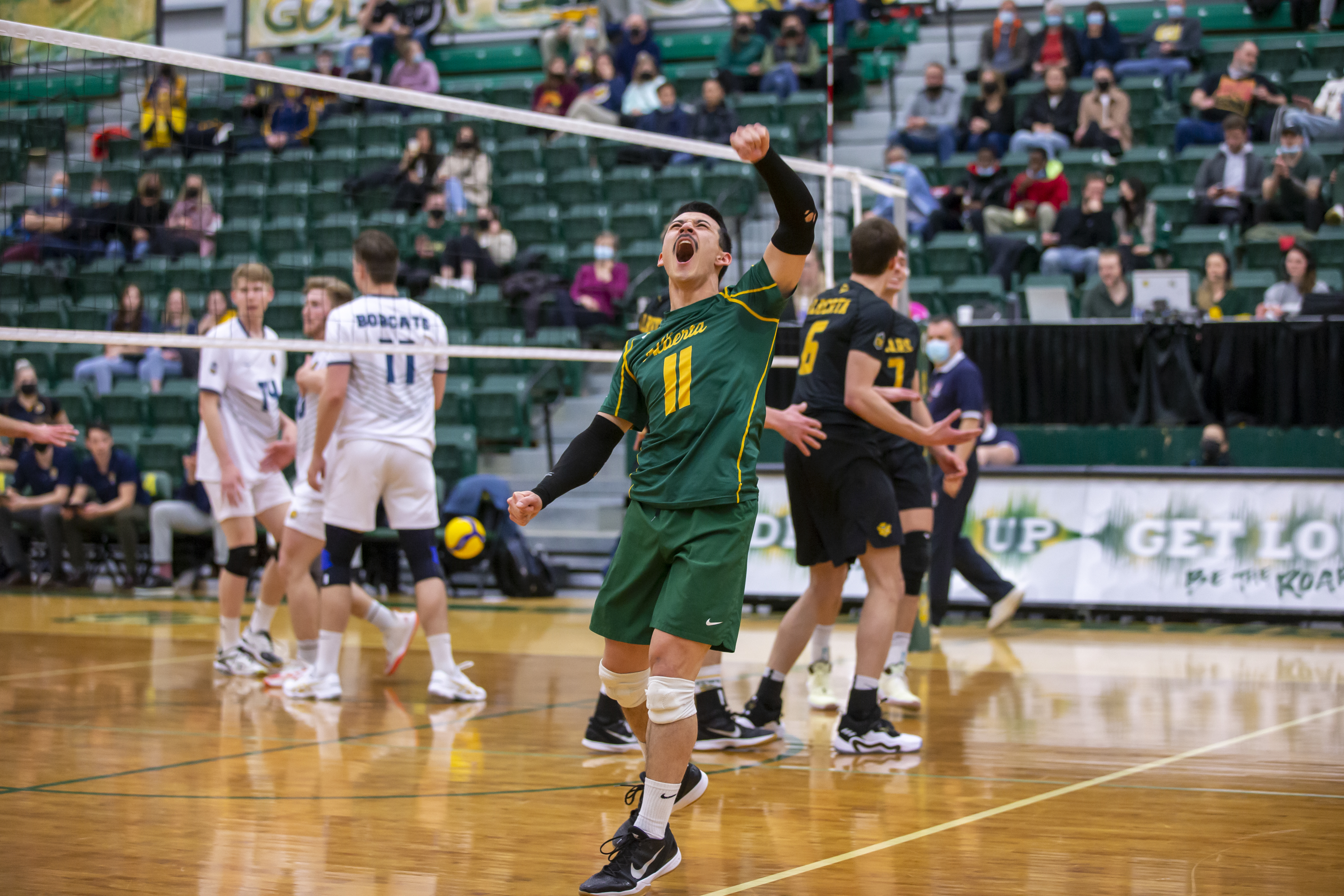 Boasting a deep and talented roster, the Golden Bears Volleyball team heads to Winnipeg with one goal in mind, capturing a 9th U SPORTS Championship.

The Bears impressed during the regular season, finishing with a 15-3 conference record, before falling to the powerhouse TWU Spartans in the conference final.

Despite not having any individual player in the top five in kills per set, the Bears led the nation with 13.29 kills per set this season. Even after losing outside hitter Braedon Friesen to injury, the Bears' offense continued to click in the CW post-season.

First-team All-Star Max Elgert netted over 11 assists per set in seven playoff games, with Rookie Isaac Heslinga filling the void led by Friesen, leading the team with 3.64 kills per set.

The 2022 U SPORTS Championship will mark the 21st consecutive appearance at the national tournament for the Bears, as they seek their first national banner since winning back-to-back in 2014 and 2015.

The Blues have brought in three transfers this season that all play key roles. Setter Zane Grossinger and outside hitter Mitchell Neuert joined the Blues from the Queen’s Gaels, while middle Jakson Paterson returned to his hometown after playing four seasons for the Guelph Gryphons. The three first-year Blues join established multi-year starters Evan Falardeau and Daniel Tudor to give Toronto an experienced squad that is hoping to make a deep run at the U SPORTS championship. 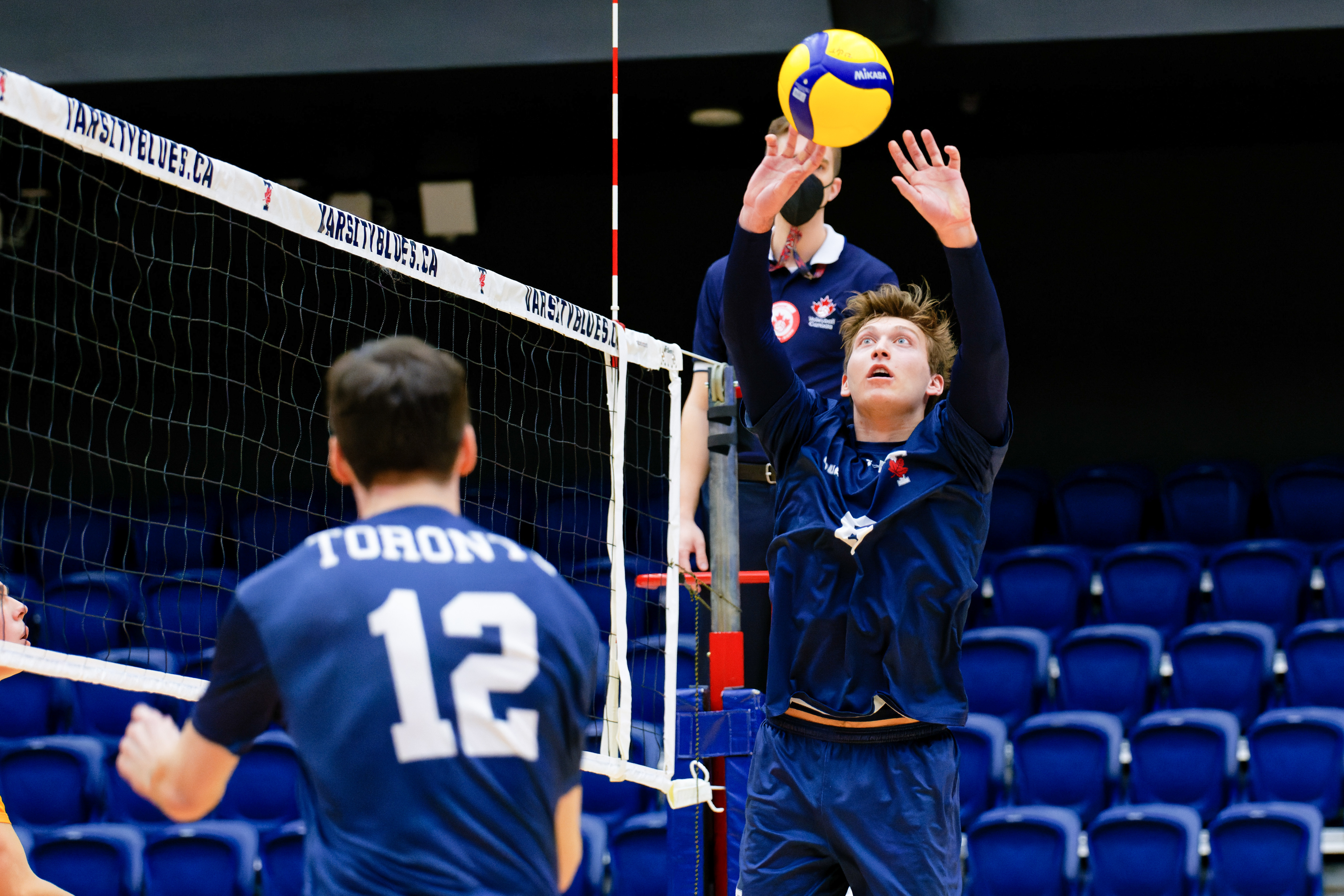 With a strong 8-4 record during the regular season, the Sherbrooke Vert et Or entered the RSEQ playoffs as the No. 2 seed in the conference.

The Vert et Or were dominant in the postseason, going 4-1 en route to a conference banner. On the playoff run, Sherbrooke dispatched third-place Laval before sweeping the top-ranked Montréal Carabins squad.

Led by outside hitter Yoan David, Sherbrooke will be looking to bring the Tantramar Trophy home for the first time since 1975. 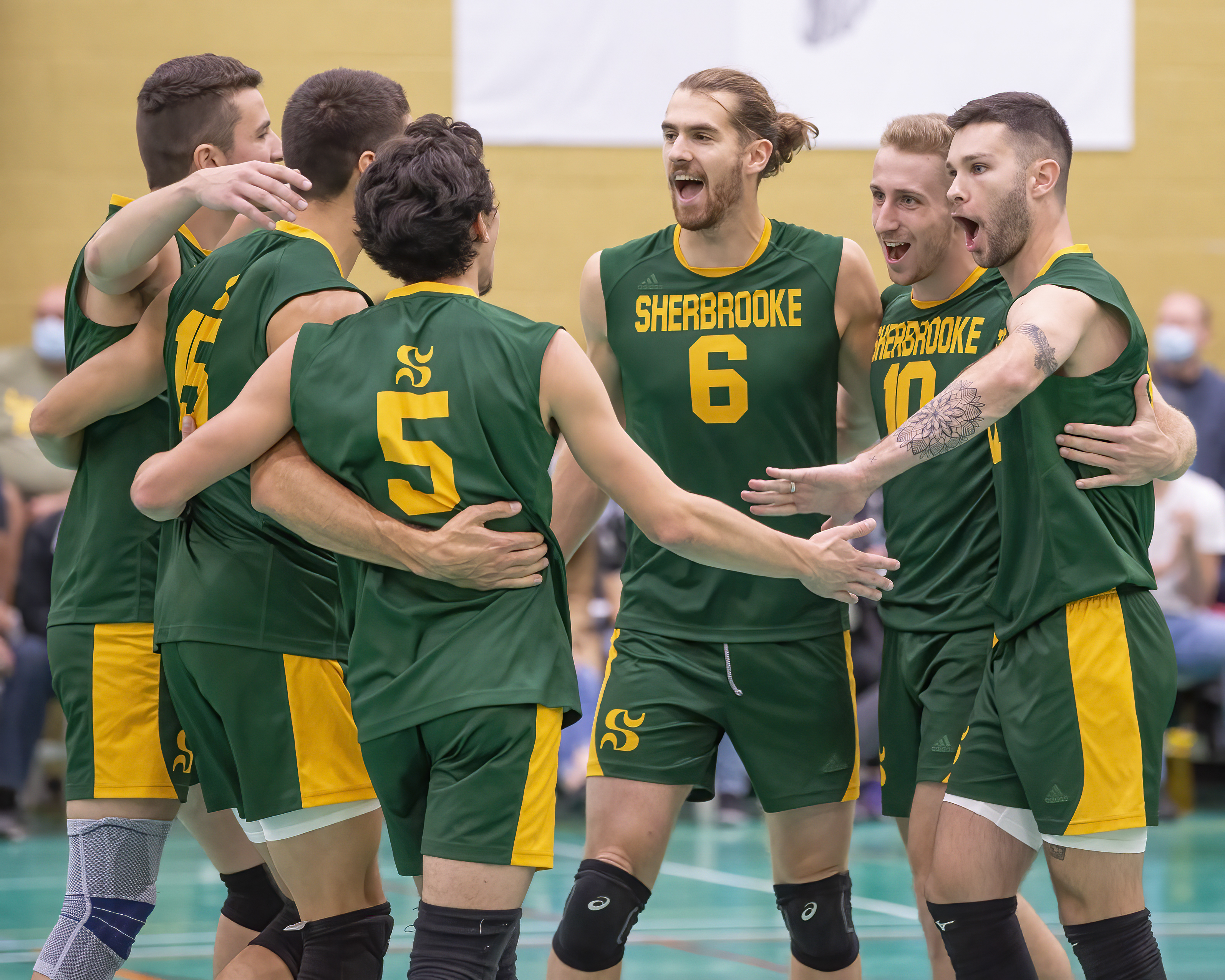 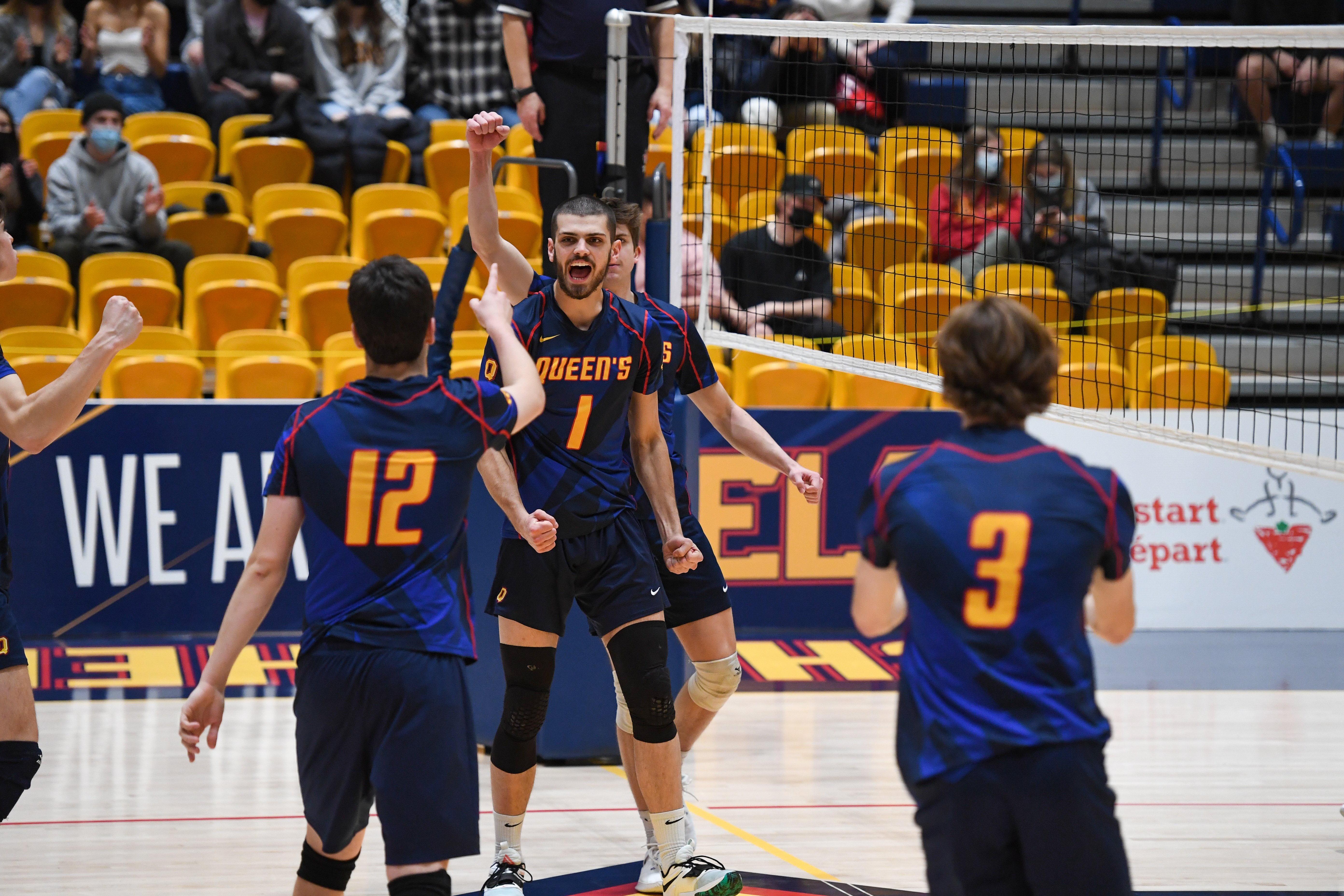 The Queen’s Gaels earned a trip to the U SPORTS Men’s Volleyball Championship after finishing third and winning the bronze medals in the OUA.

The Gaels had a very successful regular season, finishing the season second in the OUA East Division standings with a 10-1 record, finishing behind the Toronto Varsity Blues (11-1) only on winning percentage. Queen’s only dropped eight sets all regular season.

Queen’s finished their OUA Playoffs with the win over Brock to earn the OUA Bronze Medal and advance to the U SPORTS Men’s Volleyball Championship.

Erik Siksna (Markham, Ont.) had a tremendous season for the Gaels, earning a U SPORTS Top 8 Academic All-Canadian nod and winning the OUA East Division Most Valuable Player award after leading the Gaels with 135.0 points and 108 kills (3.09 per set) this season. The Outside was also second on Queen's and fourth in the OUA with 15 service aces, and second on the team with 49 digs. Siksna also had 17 blocks in the regular season this year. 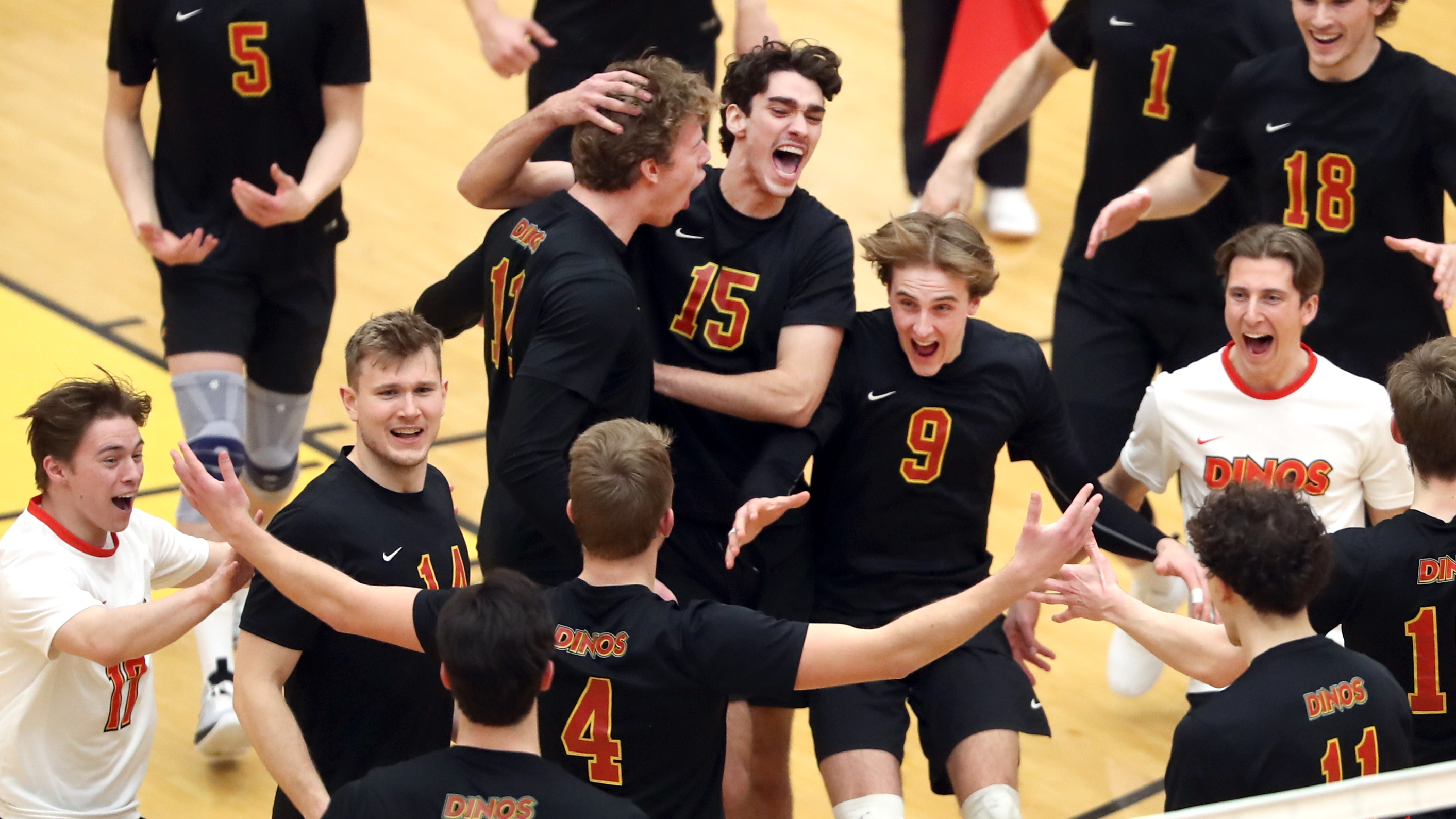 The University of Calgary Dinos are back at the U SPORTS Men’s Volleyball Championship for the first time since hosting the tournament in 2014. The Canada West bronze medallists are the most dangerous team in the country at the net with 193 total blocks on the season – 30 more than the second-best blocking team in U SPORTS.

Hamish Hazelden, who moved from the middle to the outside in 2019-20 and has been the offensive catalyst for a Calgary team that has plenty of familiarity playing together.

Complementing this veteran lineup this season has been Canada West all-rookie and middle Louis Kunstmann, along with outside hitter Erik Godwin, who has emerged in the second half. Marching through the inter-provincial schedule this year the Dinos finished with a 15-3 record and were the only team to beat the Alberta Golden Bears during the regular season as the long-time rivals split the six-game season series. 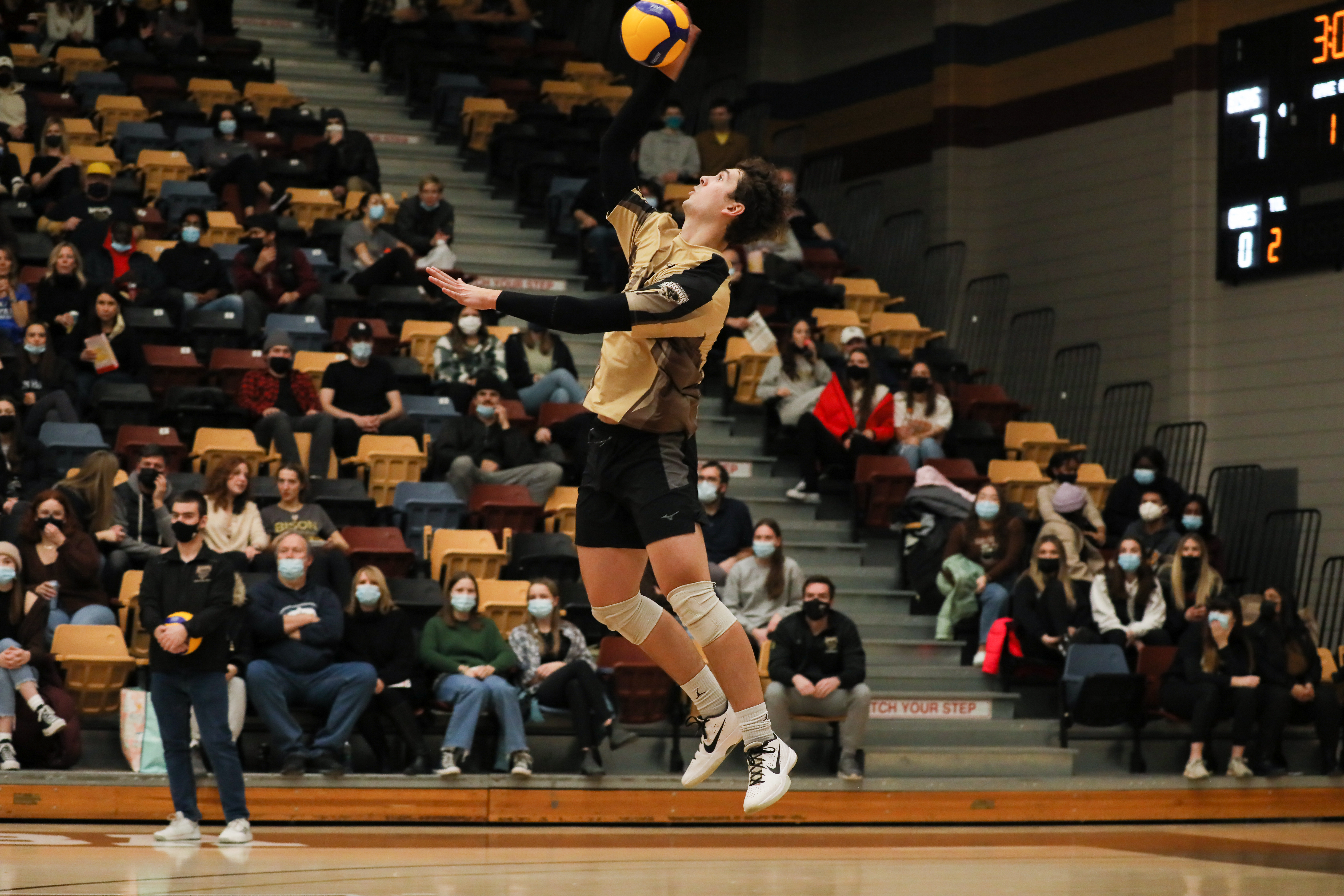 The Manitoba Bisons will have a home-court advantage, hosting the U SPORTS men’s volleyball championship, looking to build on a 7-11 regular season and a first-round exit in the Canada West championships.

The Bisons will look to third-year outside hitter Ben Carleton to lead the charge. The Australia native is a versatile player who can play multiple positions, is known for his power. Carleton led Manitoba with 3.41 kills per set.

Captain Owen Schwartz on the left side has been a stalwart on the defensive end for the Bisons, recording a combined 212 dogs over the last two seasons for Manitoba.

Carleton and Schwartz will look to bring home a record ninth U SPORTS banner in front of their fans when the tournament commences on Friday.