Sudiksha Khanduja, a recent master’s in computer science graduate from the University of Windsor, has made history at the inaugural FISU eSports Challenge Football.

“It was a great experience. I got to learn a lot and meet a lot of new people,” said Khanduja. “It was very informative watching other people play and seeing how they implement all the tactics. It’s great exposure for Canada and I’m honoured.”

“We’re proud of Sudiksha and Happy for representing Team Canada”

While the result was Canada’s lone win in the competition – with fellow Windsor gamer and incoming second-year mechanical engineering student Happy Ananum also taking part in the 32-player men’s bracket  – the new international event held from July 8-16 presented an exciting opportunity for Canada to participate in, during a challenging year for sports across the country and the world.

“We’re proud of Sudiksha and Happy for representing Team Canada,” said Dick White, Interim CEO of U SPORTS. “They have left a foundational mark in university eSports at the FISU level, and we look forward to building on their debut in the coming years.” 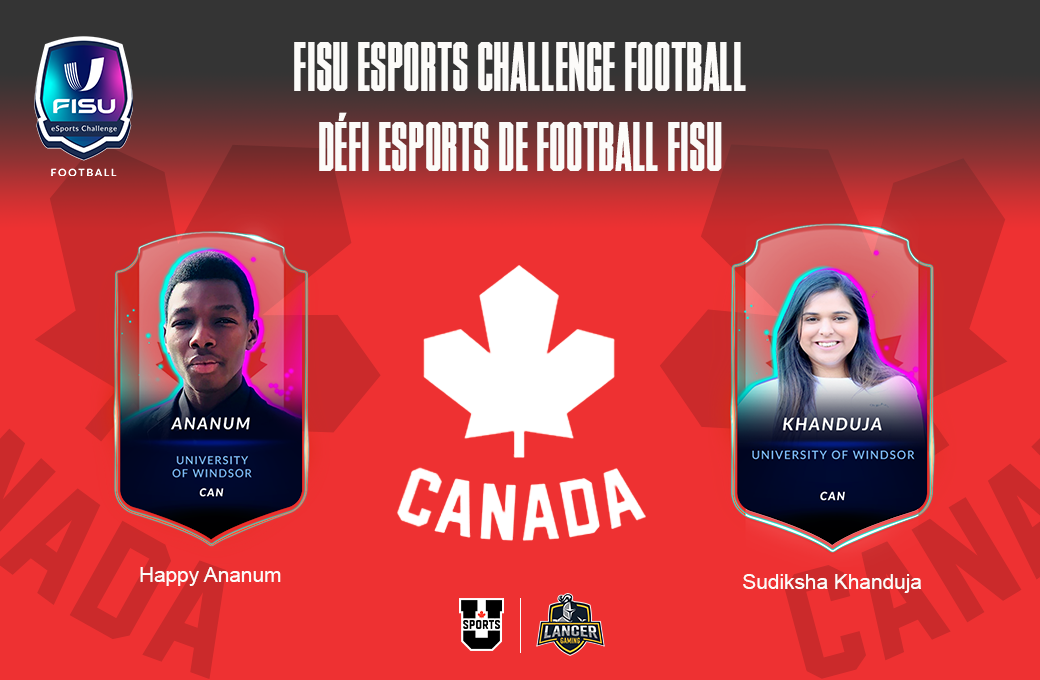 Group stage results for Khanduja and Ananum are included below, with full results available here. Both student-athletes are expected to continue their eSports careers with the University of Windsor’s groundbreaking Lancer Gaming program, which will officially launch this Fall and compete in the new Ontario Post-Secondary Esports (OPSE) league.

“I’m impressed that both students stepped up to compete on the international stage,” said Paul Meister, Coordinator of Lancer Gaming. “It's not an easy feat and they should both be proud of their accomplishment. A lot was learned from this experience and I believe that Team Canada will come back stronger than ever.”

The event wraps up the 2020 FISU competition calendar, following the cancellations of the majority of this year’s World University Championships, as well as the 2nd FISU America Games due to the COVID-19 pandemic.

On the educational front, former UNB Reds men’s soccer goalkeeper Kristian D’Amore, is representing Canada virtually in the 2020 FISU Volunteer Leaders Academy, with the first half of  the annual seminar held in June and the second half scheduled for September. The upcoming FISU World Forum will also be held virtually in August.

The Mission Staff for the 2021 FISU Winter Universiade, scheduled for Jan. 21-31 in Lucerne, Switzerland will be announced in the fall, while the fifth annual International Day of University Sport celebration is scheduled for Sept. 20.