Zac Overwater from the Lethbridge Pronghorns and Kaitlin Jewer from the Wilfred Laurier Golden Hawks are the U SPORTS Male and Female Athletes of the Week for the period ending Feb. 18, 2018. 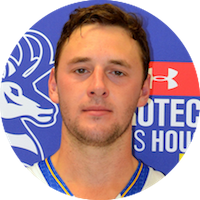 Fourth-year forward Zac Overwater recorded back-to-back double-doubles to lead the Lethbridge Pronghorn men’s basketball team to a place they have not seen in 18 years – a trip to the Canada West semifinals. Overwater led the way for Lethbridge, as the ‘Horns earned a two-game sweep of the Regina Cougars in the conference quarter-finals. Thursday night in the series opener, the Didsbury, Alta. product scored a game-high 24 points on an efficient 10-for-15 shooting from the field and completed the double-double with 11 rebounds in the Pronghorns convincing 115-68 victory.

Just over a month removed from setting a new program record for points in a game with 49, Overwater had another monstrous performance to lead the Pronghorns to the series sweep, outlasting the Cougars in overtime, 105-98. On another solid shooting night, Overwater hit over 50 per cent of his shots, including 13 from the free throw line, en route to 43 points and 16 boards for his second consecutive double-double. 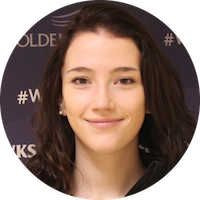 The province’s biggest stage was no match for Kaitlin Jewer in her first year on the Golden Hawks varsity team, as the Laurier skip helped her rink earn the women’s title. In her first OUA championship, Jewer guided the Golden Hawks to a 4-3 round robin record. In the quarterfinals, she made two great hits; one to tie the game in the 6th end and one to send the game to an extra in the 8th. Laurier went on to win in the extra, taking down the defending national and OUA champions, Laurentian. In the semifinal, Jewer made two great draws in the 3rd to set up an early steal of two, while finishing the first half of the game at 100%. She made a clutch draw in the last end to send the game to an extra, where Laurier took down last year’s national silver medalists, the Lakehead Thunderwolves.

In the final, Jewer, who curled 74% for the championship, made a great freeze and tap in the 7th to set up a steal and put Laurier up by one heading to the last end; a lead they would not diminish, as the Ajax, Ont. native skipped the purple and gold to their sixth OUA title in eight years.