When you can run as fast as Eugene McMinns, there’s no telling where you’re going to stop. For McMinns, the race to AUS football began in Nassau, Bahamas and has landed him in Wolfville, N.S. on the receiving corps of the Acadia Axemen.

Competing primarily as a track athlete, McMinns always had a passion for football. While training for track competitions and playing flag football, a new opportunity for a future in football arose in a place McMinns had never considered.

“I noticed Holland College when quite a few guys from Canada came down to the Bahamas hoping to find some young talent to come up there and help them with their football programs,” McMinns explained, adding that the introduction was furthered by former Saint Mary’s Huskies and Calgary Stampeders linebacker Karl McCartney. “That’s how I got into Canadian football, through him. He showed me that Canada had football!”

McMinns made his move from Nassau to Charlottetown, P.E.I. to compete in the Atlantic Football League – a four-team club league that also features Dalhousie University and both campuses of the University of the New Brunswick in Fredericton and Saint John – for the Holland College Hurricanes. At Holland College, he excelled as an athlete. Be it on the track where he was named among the school’s top athletes or on the football field where he helped the Hurricanes claim a pair of consecutive league titles, it seemed he had found what he was looking for in Canada. However, for McMinns, he had only dipped his toes into what opportunities the country held. 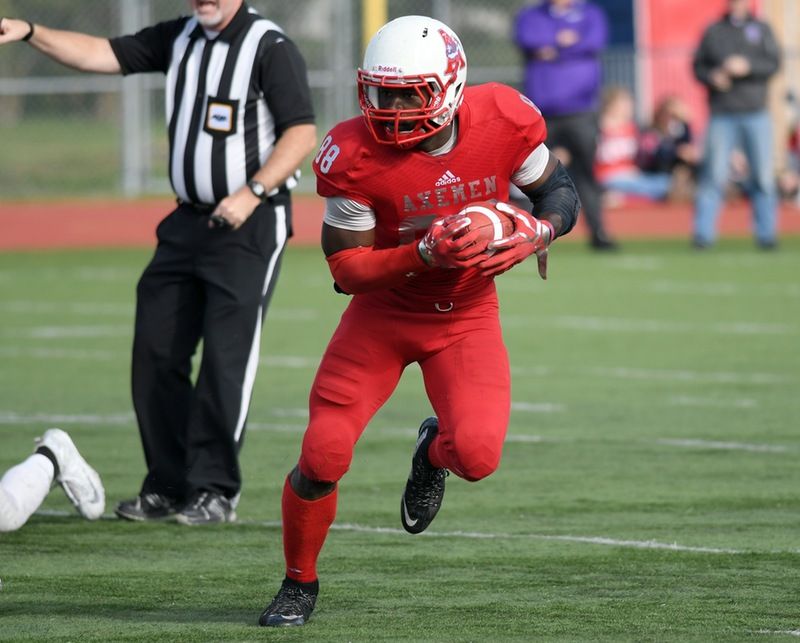 That higher level would prove to be donning the red and white for the Acadia Axemen. The wide receiver with unmatchable speed was a sought after asset given his skill set, but it was Axemen head coach Jeff Cummins that had him convinced on his new home.

“He really drew me to the school with the family atmosphere, but I really did like the intensity that they had up there too,” McMinns says of Cummins and the draw to Acadia. “The expectations are way, way higher. The competition really blew me up there because I had a chance to show that, ‘Hey, I can really play this game at the next level.’”

In his first season at Acadia, McMinns found he had to face the obstacle of the level of competition in the AUS. He lists the biggest chance as the speed of the game. Luckily, speed is something that McMinns does not have to worry about. Years of track and field training and competition saw him adapt to a new level of football quickly.

“The game is faster, mentally,” he explains. “Seeing a hole on punt returns, kick returns, screen plays, when I catch the ball in the middle of the field on a slant, being able to see a hole and hit it and being able to open up. You know sometimes as a track athlete sometimes you’re in a 400 metres or an 800 metres, you get tired, the only thing you can rely on is your form. It’s kind of the same way in football.”

After a respectable debut season in 2015, McMinns missed the 2016 due to personal reasons. While his football career was on a major upturn as he climbed the ranks of Canadian football, the missed year impacted the receiver.

“It’s a feeling that you can’t even describe,” he says. “The frustration of not playing. It’s a real let down. A disappointment for myself, my family. Just being upset with myself at having an opportunity to play at this level, to play at a very respected university, and not taking full advantage of it.”

With his return to the Axemen lineup in 2017, McMinns is turning that negative into a positive. Right out of the gate, he would score Acadia’s first touchdown of the AUS regular season in a Week 1 matchup against the Mount Allison Mounties. The play served as redemption for lost time, and announced McMinns’ arrival as a force to be reckoned with in U SPORTS football.

“Just feels good to have all that hard work I put in over the summer and the off season pay off,” McMinns says. “Coming back, making a comeback, working hard, fighting through all my struggles and ups and downs, then being able to put on that jersey and being able to come back as a starter (is special).”

Football Top 10: Montreal moves up to No. 1 following win over Vanier Cup champs