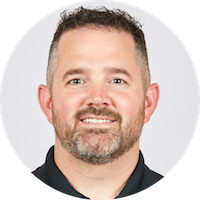 1. How did you first get involved in coaching? What was your path to your position as head coach of Carleton?

I was first involved in coaching when I became a teacher at St. Peter High School in Ottawa. They were in need of coach for the girls’ rugby team.  Being one of the few teachers on staff that had any experience with rugby, it seemed like a good fit. That was 13 years ago.

While at St. Pete’s, I was hired by then-Carleton head coach Denis Blondin to join his staff as an assistant.  When he stepped down, taking on the head coaching role seemed like the next logical step.  Between my first role and a coach at St. Pete’s and now, I have been very fortunate to have coaching opportunities presented before me, from coaching the Sr. Women with the Ottawa Irish to an assistant with the Canada U20 women in 2017.  Each of these opportunities has helped me develop as a coach and ultimately has played a big part in shaping how I coach today.

There are several people who have influenced me as a coach.  Both my dad and older brother were a big influence as my hockey coaches throughout my youth. They were incredibly dedicated and passionate about hockey as well as the teams they coached.  Their passion for coaching really opened my eyes to it and I knew that it was something I would eventually get into later on.

Also, my high school rugby coach, Tom Mellor.  He introduced me to rugby and his coaching style really sparked my interest in the sport.  The values I have as a coach were shaped in a large part by how he coached.

Along the way, there have been numerous coaches who have all influenced how I coach in some way.  Jen Boyd, Dan Valley, Duncan McNaughton, just to name a few.

I think it’s hard to nail down a specific coaching style.  How I coach is guided by what I believe is needed at the time and with that particular group of athletes.  I think as a coach, we have to be able to adapt to who we have in front of us and what level of rugby we are coaching at. What will work with one team won’t necessarily work with another, even if it’s the same team but one year to the next.  Within that, I do have a number of key principles that guide how I coach.  First, athletes need to be challenged to think and make decisions for themselves. My job is to help guide them to the best decision as opposed to just telling them what they should do.  When they can do that successfully, it instills confidence and can be very empowering.

Second, the experience, no matter the level, must be fun and enjoyable.  The element of fun is what likely drew all of us to the sport in the first place and I think it can be often lost when the focus shifts solely to winning and losing.

If an athlete can walk away from a team that I have coached feeling more confident in their ability to play rugby and have enjoyed the process of getting there, then I think I have done my job.

That’s a tough one to answer.  There are so many good coaches at all levels and in all sports.  I don’t think I admire just one, but I hold a number of coaches in high regard for a variety of reasons.    Some that come to mind are Wayne Smith with the All Blacks, Pete Carrol with the Seattle Seahawkes, Sue Enquist, Brad Stevens, Mike Babcock.  There are others for sure, but each, in some way, has influenced my perspective on coaching and how I coach as a whole.  Seeing, hearing, or even reading about how they coach and their perspective has definitely shaped how I coach.

I must say, I don’t think I have done too many things that would be deemed “out-of-the-box” but maybe I should think about doing it more often!

There are a lot of great moments. Too many to pick one.  I have been very fortunate to have the opportunity to coach so many amazing young women.

I think my greatest coaching moment has been continually watching the young women that I have coached over the years achieve great things, both on and off the rugby field.  From watching them as kids I coached in high school progress to successful U SPORTS rugby careers and in some cases on to the national team at various levels, to watching them become successful young women in the real world.

Bottom line is that you need to have fun and enjoy the experience.  Being a U SPORTS student-athlete is a significant accomplishment and takes incredible amount of hard work and discipline.  It’s easy to get caught focusing on results and not enjoying the process. At the end of the day, you are going to remember the people you shared this experience with and the memories you have created.   You don’t need to win a championship to have a fulfilling life as a student-athlete.  It’s important to keep that in perspective.

I think the values I have as a coach have been consistent throughout my coaching career. Opportunities and relationships are two principles that I have always felt are important, in sport and in life.  I believe that opportunities are not always just provided to you, you have to create and earn them.  If you are passionate about what you do and committed to reaching your full potential, you will create opportunities that you may not have thought were possible.  The best things in life come to those who work hard, who are disciplined, who compete and who persevere.  Rugby is no different.  As a coach, I have the opportunity to help create a team culture at Carleton where these values are a part of everything we do.  Along the way, in working with people who share those values, you develop amazing relationships with the athletes, fellow coaches, and parents.