The No.2 ranked Toronto Varsity Blues bounced back nicely in their second game of the 2019 U SPORTS Women’s Volleyball Championship.

One night after a tough loss to the host Alberta Pandas, Toronto came through with a strong four-set victory (25-19, 18-25, 25-21, 25-16) in the second consolation semifinal matchup against the No.3 ranked Calgary Dinos.

Fourth-year middle Beth Vinnell led the Dinos with 12 kills in the loss.

Toronto dominated with the service line with 11 service aces in the win, led by Patrick’s six.

“We knew we had to serve tough,” said Varsity Blues head coach Kristine Drakich. “We just kept saying ‘keep serving tough, it’s going to create opportunities for us’ and Calgary played very well. They touched a lot of balls on the block. They were responding well and were bringing back well.”

The Dinos entered the tournament decimated with serious injuries to key players. They were missing First Team All-Canadian outside hitter Kate Pexman along with Hannah Tanasichuk, who are Calgary’s most prolific hitters, combining for 586 kills over the regular season. 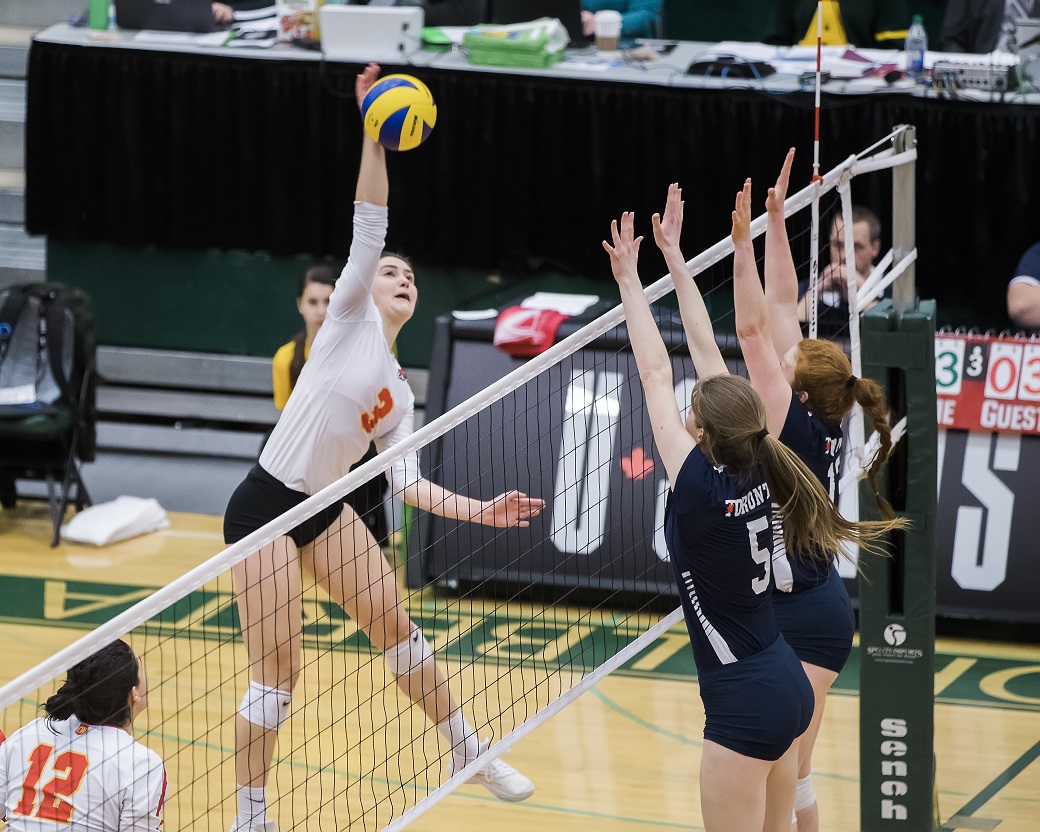 After a rough tournament opener - a straight sets loss to Ryerson on Friday - the Dinos battled Toronto hard, but simply fell short.

“I felt like we brought our full performance and everyone was working together,” said Dinos head coach Natalie Gurnsey. “I couldn’t be prouder of how we played tonight.”

Calgary looked overmatched in the opening set, not able to hold a single lead, but they returned the favour right back at the Varsity Blues and withheld a late 8-0 run to take the second set 25-18, but that momentum that Toronto grabbed late carried over into the rest of the match.

Toronto got off to strong starts in the third and fourth sets and they continued to make it tough on Calgary from the service line. Eight of their 11 aces came in the final two sets.

Anytime the Dinos would close the gap, Patrick or Dormann would come up with a clutch ace.
Toronto’s experience over the injury-riddled Dinos showed in the final stages of the game.

“We started to serve more aggressively in that second set, and that completely changed the momentum. They got out of system way more. We were able to build momentum with our block,” said Gurnsey. “We got a little unfocused in that third set doing that job and doing our job serving and it allowed Toronto to come back in.

Dormann showed once again why she was the OUA kills leader this season. The Ottawa, Ont., product was a force all over the court for the Varsity Blues.

“Calgary’s had an unfortunate set of injuries and their determination and grit came through. They made it difficult for us and we had to stay patient. I was glad we stayed composed and stayed with it.”